On Sunday we drove down to Brighton and had a lovely day walking along by the sea. We had lunch at Food for Friends (love that place), another walk, and then headed towards Kent for the night. The weather was beautiful- it felt like perhaps spring was actually here. 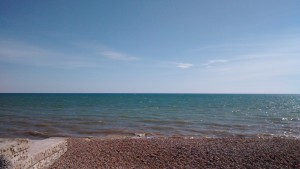 This morning I was up early (nearly as early as a work day) as we had an hours drive to get to the start of the Cakeathon! It is organised by the Saxons, Vikings and Normans marathon and challenges group, and they put on lots of themed events each year. They only have a small entry list and they sell out quickly so be warned! I read about this race last year on Anna’s blog, and when they released a new one for the May bank holiday (which also happened to be my birthday) I knew I had to do it- running and cake together? And the medal…..

Anyway, back to the race. I had my clif bar and some water, put on suncream (before looking outside) and then got dressed- I had only packed a vest and long sleeved top for the finish, so no chance to change my mind.

We got to the start with about 25 minutes to spare, although there was a race briefing at 8.50am. I joined the queue to get my number, and was shivering the whole time. I was not feeling it at all! I think it didn’t help that I had a big group of a running club in front of me, and other people from the club kept on joining, so although the front of the queue was moving, I didn’t for ages as more people were joining in front of me. Not very British! 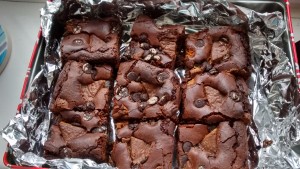 On Saturday I had made some peanut butter cup brownies (as they encourage participants to bring cake too), so after collecting my number I popped my tin into the tent next door with all the cakes. There were mountains of cakes! 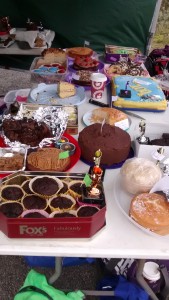 One of two tables, plus the boot of one car was also filled!

I did consider going to the toilets beforehand, as they were in the visitor’s centre and not port-a-loos (I would avoid port-a-loos unless a total emergency), but I didn’t think I had enough time and wanted to hear the briefing.

The idea of the race is fab. There is a 6 hour time limit, a loop (originally 3.something miles, but it was extended to 4.something this week), and you do as many loops as you want in the time limit. You have to have left the start area at the 6 hour point, so people can take longer if that makes sense. They give you a card and a cable tie- I tied it to my Garmin, and after each lap they punch a hole so you can keep track of your distance. When you finish, you ring the bell. Not sure how they time it, (not that I am worried), as the main thing is the distance. I loved the instructions which included “eat cake, enjoy the run, look at the views, smile”. I agreed with all of them! 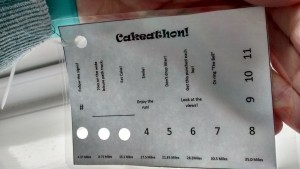 Now when it was a 3.something mile loop, I was going to do 3 or 4 depending on how I felt- 9 or 12 ish miles. But now it was longer, if I did 3 laps it would equal a half marathon. Going all of that way for 2 laps didn’t seem so good either (for me – some people did one lap- some were going to ultra distances- it’s all good).

The loop was undulating, and had some very steep sections. I decided to walk some of them, just because I wasn’t going for time and didn’t want to not enjoy it. I even checked my phone a few times as it beeped with birthday messages! 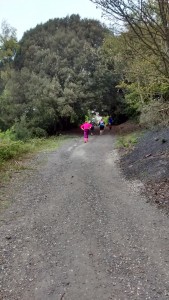 I even took some mid-run pictures! (While walking up some of the hills) 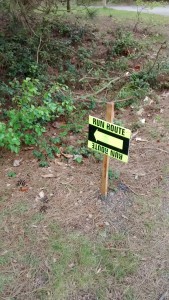 There were no marshals on the route at all, but plenty of these signs, and even I did not get lost. There was a number on your bib so if you had a problem you could call one of the RD’s, which was useful.

I spent most of the first lap thinking about going to the toilet after my first lap, and wondering why I had put on sun-cream! I also planned to take some photos in the second lap, so looked out for nice spots.

When I finished the first lap I realised we didn’t actually run past the toilets (someone had told me you did, but I think that must have been before the change of route) and I decided I was OK, so got my card stamped and headed straight out again. 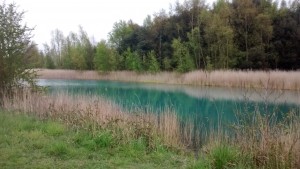 There was some lovely scenery, lots of bluebells and even some tulips growing wild. I could hear a cuckoo at one point (the same point on the course each time) and it took me a while to work out where I had seen one recently- Jungle Book! 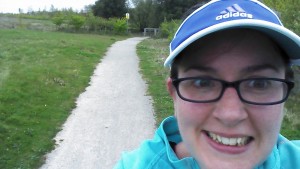 This was taken while I was running! Very impressed that it wasn’t blurry! Not long after this I decided to take my long sleeved top off and brave the vest. The thing was, in the wind I was OK in this top but very hot out of the wind versus being OK out of the wind and very cold in it. I decided I would rather be a bit cold at times than a bit hot.

The route was like a melted lollypop- basically you went out on the “stick” for a mile or so, then a loop of two miles within the park, before running back down the “stick” bit again. On the map this looks confusing (to me), but actually it was great because on the out and back bit (like in the country dancing song ” you pass your partner going out, you pass them coming in”) you passed loads of people going the other way. Everyone was so cheerful saying “well done” and “keep it up”- you never knew if someone was ahead of behind you after the first bit, and of course some people could be running for the whole 6 hours. Heading back in on my second lap I was passed by Jane, who was heading out on her third! Small world!

By this point I was fine, so I got my card punched and headed straight out again for my third and final lap. I think I should have had a drink from the very well-stocked aid station, but I didn’t want to stop really. The wind was so cold on the final lap, and it rained a bit, but still everyone was cheerful. There was a big group of runners from near here (Dacorum district) and someone on her hen do with everyone in purple tu-tus. There were some “Where’s Wally’s”, and I saw some children running with their parents. It really reminded me of a parkun- so friendly and laid back, and welcoming. I did start to consider a fourth lap but I knew that wasn’t sensible with my back just being better, plus it would not have been fair on Andy (who was waiting for me in the car/ cafe). 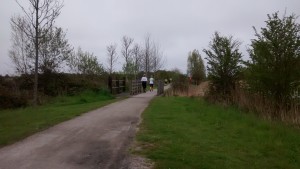 I headed back to the finish for the final time, got my card punched and then rang the bell! Now you would think that seeing as we have a bell like this at school, which I do ring, I would have remembered not to ring it right by my ear. But no, I rung it right in my ear. 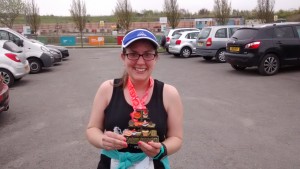 And just look at the medal! 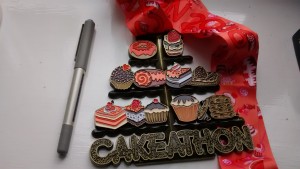 I collected my tin and some cake (I chose a vegan lemon drizzle, which I ate in the car- delish, a marzipan bundt cake, and a chocolate cupcake)- I thought it was one slice per lap, but the guy said to have as much as I wanted, but I felt like I should be a bit restrained! 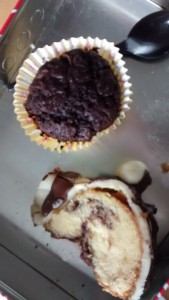 (After the cake had gone!)

I headed to the visitor centre to change and get some peppermint tea (I was so cold by that point) before we headed home. 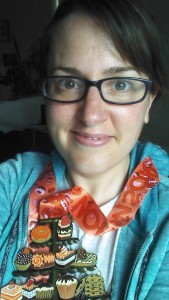 And yes I did wear my medal all the way home, and yes now my neck aches! 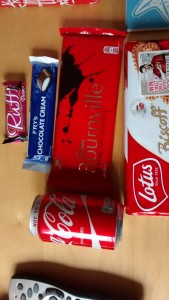 I had requested a vegan goodie bag too- when I signed up it gave examples of what was in the bag, and I thought it would be things like haribo (not vegetarian) but in fact I think they were mainly chocolate things so if I were to do another one, I would probably go for the normal bag. I love that they had that as an option though. I am very happy with the biscuits and dark chocolate though!

So, no idea of my time yet- Strava says the total time was 2.18:20, with a half marathon of 2.17:27, and a moving time of 2.10:48 (having your card punched does take a little time after each lap). A really enjoyable event- just a shame that it is a couple of hours away as I would love to do more of them.

What would your ideal themed running event be? Did you enjoy the long weekend?