On the last day of term (hooray!) I had booked on to the second of the new 5 mile series. This one was held at Panshanger park, home to my favourite parkrun, and now just around the corner.  We had gone out to lunch and I had ended up with the fruit toast, as the only savoury veggie option was a spicy bean and avocado wrap (which I have had before, but didn’t fancy something too spicy before running).

The race started at 7.30, and you had to collect your number, so I planned to get there at around 7pm. The start was in a completely different place to where the parkrun starts, and all the cars were being directed along very bumpy roads to a field in the middle of the parkrun course. On the way there I was hoping to find a way to run to parkrun, as the way I normally drive is dual carriageways with no pavements. I got to within a mile or so, all with pavements, but the last mile and a bit was along a national speed limit road, which was very twisty and had no pavement, so not an option. 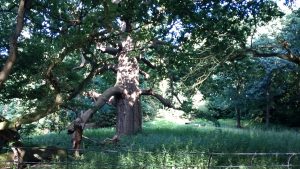 I knew by then that I would not be beating my 5 mile time from the previous midsummer series race! We started off up a hill, which was tough but OK as it meant you  would not start off too fast. The park really is beautiful, and we were lucky with the weather as it was a little cloudy and not too hot. We had a short steep climb at the end of the first mile, and then we were rewarded with some lovely cool shade and the beautiful old oak tree. My first mile was 10.43. We then had a steep downhill followed by a lovely long gentle downhill through open fields. Here I was overtaken by some speedy children doing the kids races (they were started just after the main race). Just before the 2 mile point we ran past the start/finish area, and I could see some of the front runners heading down a very steep path (starting their 4th mile already)- this made my heart sink as I knew we would be going up a long way in order to go back down. Groan! My second mile was 9.11- much quicker (thanks downhill section!).

We then went into a section of the park that is usually closed to the public. The park keeps on opening up more sections (the oak tree was opened after the parkrun started)- there are old and working quarries still in the park, so we ran past a lot of “No Entry” and “Danger” signs. It was great to see the scenery, and although it sent steadily up, it didn’t seem too bad and I felt like I was keeping a strong pace. Then we turned a corner and were told by a marshal “it’s the last hill”- and boy was it a tough one! It was so steep that I walked up it (as did most of the other runners)- no point wasting energy as my walking speed was the same as my running speed. 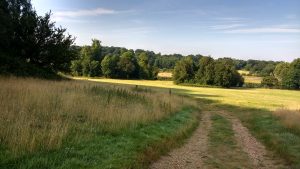 Just after that my watch beeped for 3 miles (my third mile was 10.44, so only just slower than my first mile which wasn’t too bad seeing as I walked for a bit). At this point I noticed one of my friends up ahead so I tried to catch up with her and we briefly chatted. We then came to the very steep downhill section- I tried to run in the middle of the track as the grass helped with the grip, whereas the rest of it was very loose shingle and felt very unsteady.

After the steep downhill section we passed near to the start/finish area again, before running along the valley- the same path as the final 2K of the parkrun course. I tried to pick up the pace here a bit as I knew most of that was flat, and managed a 9.43 mile here. We then got to do the parkrun finish hill, although thankfully they chose the altered course (instead of going straight up the steep path, it zig zags across the field. The marshal there was telling the truth as he said it was the final hill!

The final mile dropped gently down through a field, to finally run alongside the river. Near the end I saw my run leader and her boyfriend, and they gave me a big cheer and told me to “sprint!”- I tried to follow instructions although because of the long grass I was having to check my footing carefully. My final mile was 9.22, and as I came up to the finish the RD read out my name (and said I was first OH lady, which I knew I wasn’t) and I attempted a bit of a fist punch. 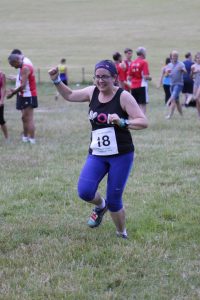 After getting my timer chip cut from my shoe, and being given my medal, I collected a water and a banana from the table (they also had various chocolate bars but I didn’t fancy any of those) and headed to get my print out. My chip time was 49.43, so I was very pleased to get in under 50 on a pretty hilly course.

Some of our OH ladies had finished their 100 miles that night (it was the 21st!) so they had to have some pictures to commemorate. Very impressive! 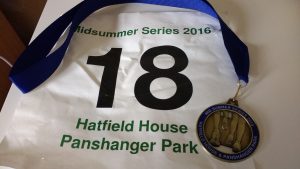 The medal is really nice- it has both races on it (they said that if you did the first and not the second, they would send a medal out to you) as well as the date. 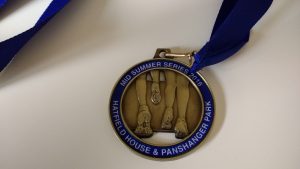 Then it was time to head back to my car, and head home to officially begin the summer holiday! 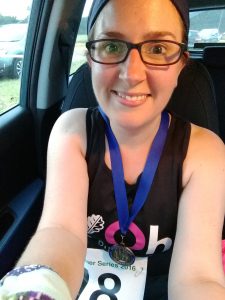 I really hope that they put these races on again next year. I love the 5 mile distance, and running in places like these is so much nicer than a road race- such lovely scenery. Plus they were so low key- park right by the start, pick up your number and run- no huge crowds or wave starts.

What type of race do you prefer? Which sort of distance is your favourite? Do you prefer undulating or flat courses? I think sometimes undulating is almost easier because you can get some speed up on the downhills, plus flat running can get monotonous.