After missing several weekends whilst on holiday, I was very much looking forward to going to a parkrun this weekend. As my dad and brother were both around, and none of us had to be back quickly, we decided to visit a new (to us) one. We had a little look around, as there are a fair few within about a 50 minute drive, and on the end settled on Wimpole Estate (I keep calling it Wimpole Hall). It’s about 40 minutes from me, it is in the grounds of a National Trust park, it is one lap (we prefer that) and it sounded lovely.

As I was on the way, Dad picked me up at 8am and we arrived at around 8.40, so not too bad at all. The parking costs £2 (there were signs saying that it all goes to the upkeep of the lovely surroundings) but it’s free for NT members. The car park was right by the start area, which had a building with toilets and a cafe. I don’t normally go to the toilet before a parkrun (Panshanger doesn’t even have any) but it had been a longer than usual journey. 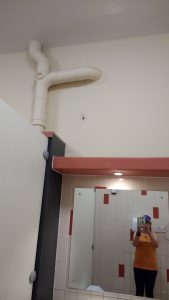 The toilets were fine, but can you see the enormous spider on the wall???? I was staring at it in horror when another lady came in and told me “it’s a harvest spider”. Giving it a nice sounding name makes it no less scary. Even though the cubicle on the end was free first, I waited because there was no way I was going into the one closest to that monster!

Anyway, once safely outside again we were chatting and heard a bit of a shout (over the noise of a lot of dogs barking)- we realised that they were doing the new runner’s briefing, so headed over, but when we got there it was more general information for new parkrunners. We had looked at the course online and knew it was one lap, which is much easier to turn up at (if courses are multiple laps you can’t just follow the person in front in case they are on a different lap number). Once this was over we were told to head to the start, a few metres away. One thing I thought was really good was that they had a separate start for runners with dogs. I don’t mind dogs, but I’m not hugely keen on them when running as sometimes people have them on longer leads, and you don’t always see them as they can veer a bit more erratically than people. Plus the barking over the noise of the run briefing was particularly bad here (even though most of them were already away at the dog start). They started a bit of a way up the road and off to the right, so after about 500m they merged with the rest of the runners. They explain the reasons well on their facebook page: nervous non-dog runners don’t have to worry about multiple dogs at the start around them, the dogs have generally steadied their run by the time they are caught, briefings can be heard and we can remain inclusive to all. They also remind people of these rules: One dog per runner on a short lead or harness. Please ensure dogs are under close control at all times, including before and after the run. Be conscious of any nearby runner who might be frightened off ( remember, for good reason some people can be terrified of close-by dogs). Bag and pick up any dog waste as you run. As our course has livestock keep dogs on leads at all times and if you have to take a wide route to not scare livestock, then so be it. One slower run is better than no future runs. I thought this was really good because they are still including people who want to run with dogs, but the reminder that not everyone loves dogs is very important. Apparently the Cambridge parkrun now does not allow dogs because they regularly have 500+ runners and it’s a lapped course, so I imagine they get all the dogs from there too (it’s about 10 miles from there).

The run briefing was then held, warning us of some slippery parts on the course, and then (I loved this) a sort of air horn signalled the start!

I had said to Dad I wanted to take it easy, because I only ran once on holiday, and since being back I had run a couple of times but had needed a walk break during them. He was happy to stick with me as he was not worried about time, but my brother headed off in front of us as he wanted to go a bit quicker. It was busy at the start- we weren’t right at the back but because we were running along a road  (track) initially, it felt a bit narrow. Once we got into the fields the runners were quickly spread out. Underfoot was long grass so you had to watch your step, more in some places than others, but as we were going steadily it was fine. We saw the highland cattle and some calves (and had to dodge big cowpats- at one point a marshal was shouting at everyone “mind the low branches on the tree and the big cowpat on the path”- a slightly unusual warning!), as well as sheep, geese and possibly some goats (they were silhouetted against the hill so they could have been sheep with horns). 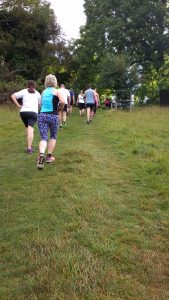 We had been told about the one hill on the course, and that it was short and steep. At around the 2km point we started going uphill, and we both said “this isn’t too bad”. Well then we turned the corner and were faced with that hill! It was very steep indeed so I told Dad I was going to walk it. He kept running and waited for me at the top. 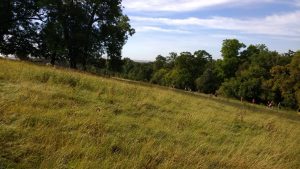 It did mean you had lovely views of the grounds, the house, and the countryside beyond. You could also see a lot of the other runners ahead and behind, which I liked as part of the fun of parkrun is running with others.

The 4km point seemed to come very quickly, and then we were heading back close to the big house, and running back along the road where we started. I thought we would finish where the new runner briefing was (as I had seen boards with numbered hooks for the finish tokens) but it was right where the start was, so our final push was a bit late starting!

I was position 264 (out of 368), and we both had the same finish time of 32.13. Near the end we had noticed these strange structures in the fields, with large mirrors on them. Dad asked a marshal on our way passed, who said it was something to do with the 300th birthday of Capability Brown. After getting our tokens scanned, we had to put them back on the boards ourselves (this to me seems very risky- at every other parkrun the scanners have taken them and put them into a bucket right away, to be sorted later, and even at those parkruns they lose some. Here at the main briefing they reminded people that the tokens are not a souvenir, but the board was a good 10 metres from the scanners, leaving plenty of time for people to see someone they know/ wander off for a cup of tea). Anyway, right by the board was another one of the mirrors with a little explanation- it was about looking at the landscape in a different way. 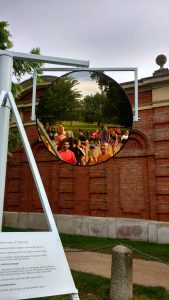 So we had our obligatory parkrun tourism photo in the mirror instead. There was a National Trust tearoom (my favourite) but we have decided to visit it next time we go there.

After getting home at around 10.30, it was time for a quick shower and breakfast, before our job of the day- dismantling the shed. Our old house had a garage, but this one doesn’t, so things like the lawnmower need to be kept in a shed. It had two (one is really a small bike shed), but we found (after a big rainstorm) that the main one is not waterproof, and when some people took away the big dog cage that was next to it, it was rotten in more places than we realised. We have ordered a new one, and we found out it is being delivered next week. 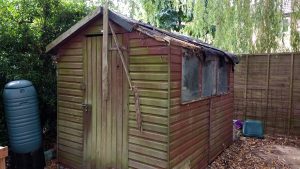 Before we even started we had to get everything out, and the people who lived here before us had left a lot of junk in it, including a big metal shelving unit, a rotting wooden shelving unit, half filled massive tubs of paint, random old outdoor candle holders and other assorted rubbish. 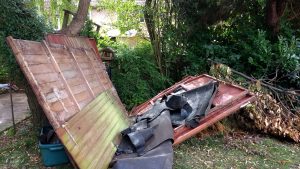 It took hours! I think it took us about 4 hours in the end. There were panels of glass so we didn’t want to smash that, the roof felt had loads of small nails in it and was disintegrating everywhere, and there were huge rusty nails and screws- I had visions of one of us standing on a nail and having to go to hospital. Andy had to saw through the bolts as they were so rusty they would not undo, as well as prising some of it apart with a newly purchased crowbar. There were also so many spiders in there- by the end I was reaching saturation point having already seen that massive one in the morning! 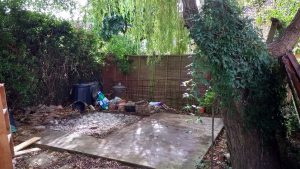 Weirdly the shed was not on the concrete base- that’s where the dog cage is, so our new shed will go next to where to old one was (and behind- more junk that they left us- an old metal bin, a rusting wheelbarrow, old recycling boxes, bags half filled with compost….). We have no idea how to get rid of the old shed panels, but that at least can wait.

When that was done we headed over to see my parents and catch up on their holiday (they went to Iceland) and tell them about ours. My mum had made some caramel shortbread, but the chocolate hadn’t set, so she said (completely seriously) “I can make pancakes instead”! Melted chocolate is no bad thing in my eyes!

This morning I was up early for a 6 mile run, as we were going out for brunch with Andy’s brothers and their wives. We met at The Bakehouse in St Albans, and I had the most delicious French toast, with blueberries, banana and maple syrup- the perfect breakfast after a run. 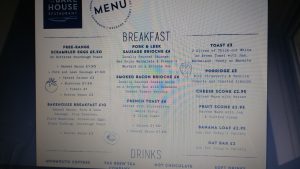 Afterwards we had a long walk around the park before heading home. It’s been a great weekend- parkrun/ long run, seeing family and friends and ticking some house jobs off the list.

What do you think about the separate start for dog runners? How does your parkrun collect and sort the tokens?