So, after a few days in Austria, we got a bus from Salzberg to Berchtesgaden, a national park in Germany. 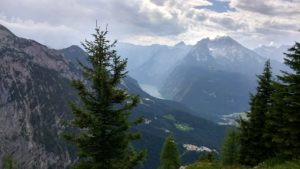 We arrived too early to check in, so we left our bags in the hotel and then got a bus up to the mountains. Andy wanted to visit the Eagle’s Nest, so we headed there. I didn’t know much about it, but it was interesting. At the main stop there was a small museum (although it only took cash and we didn’t have enough with us for the audio guides, and all of the exhibits were in German so I didn’t understand much of it), and the bottom floor of the museum was the bunker. You could walk around the bunker and see the different rooms, as well as graffiti from the troops who found it.

No cars were allowed to the next part, so you had to buy a bus ticket (or it was something like a 3 hour hike)- at most parts the road was only wide enough for one vehicle so the buses leaving the top and bottom left at the same time and met in the middle for the passing places. At the top, you then queued to go up in a lift to the very top. The views were beautiful, but it was a strange place to visit. I think they said Hitler only went there maybe 9 times, and the actual home is now a restaurant (which seems weird to me too).  I did find it uncomfortable seeing people take selfies and things up there- I mean, they don’t want it to be some right-wing extremist pilgrimage place, but it seems a bit too far the other way.

Anyway, on the bus on the way back down to the main part, the most torrential downpour started, and of course our rain coats were back in the hotel. We were drenched within seconds of getting off the bus, but luckily there was a bit of shelter, so we waited for it to ease off before running to the next bus stop, to get back down to the town. 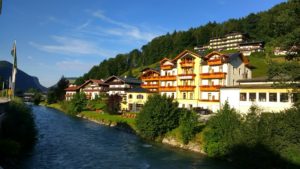 This was our hotel, by the water- no sign of the downpour by then! We had a lovely wander into the town, admiring all of the buildings with their window boxes full of flowers.

The next day we got the bus out to the national park- there is a huge lake there and you could get a boat ride (45 mins ish) to the end of the lake, where there were lots of hikes. At one point they stopped the boat and someone played a horn (or trumpet, or something) because there was a famous echo point. 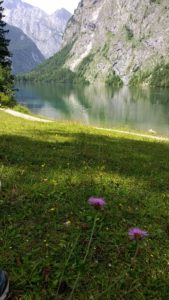 We did a 3 mile walk along to another lake (I put my Garmin on for the way back to see how far it was)- at some points it followed the edge of the lake, and at others it followed large stone steps up and down the side of the cliff edges. The scenery was beautiful, but it was so hot. We took a break at the end before walking back to catch the boat again. 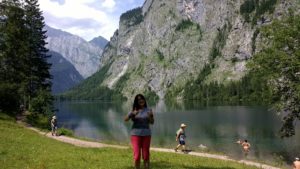 Loads of people were swimming in the lake- I bet it was freezing but so refreshing after walking in the heat.

To get to Munich (where we flew home from) we had to get the bus back to Salzberg and then a train to Munich.

I didn’t know what to expect with Munich but it was jam packed with tourists. After a shorter wander on the afternoon we arrived, we spent most of the next day in the main park, the English Garden. It was a bit like Central Park- huge. A river ran through the centre and at one point there was a bit of a whirlpool and people were taking it in turns to surf in the river. Loads of people were swimming and sunbathing, we saw people playing cricket, playing football in those big inflatable zorb things, people horseriding and cycling…. it was clearly the place to be on a hot weekend day. 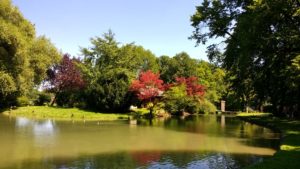 We could have got the underground or a tram back to nearer our hotel, but we ended up walking- it didn’t quite beat our Salzberg days but it was close. 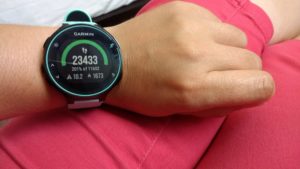 The day we flew home it was due to rain, so originally we were going to head to a museum, but when we got to the train station to buy the ticket (you could get a day ticket that included travel to the airport as well as the trains and trams in the city centre), it turned out the machine wouldn’t take cards, so we walked to the main station (probably a 30 min walk) and looked there for a bit. Andy found out by then that he could get an app and buy the tickets that way, but by the time we had worked it out, there wasn’t enough time to get out to the museum and back again to get the bags from our hotel, so we ended up just having another walk around the centre. It was a bit quieter, but not much. Pretty much all of the shops and cafes were closed, which was a bit strange. I do wonder what the American tourists think when they come to a fairly big city and then find out that not much is open. Anyway, despite the rain (and it didn’t come to much luckily) there was still plenty to see- lots of huge buildings (some looked like they belonged in Paris, whereas others were the more typical Germanic style), statues and fountains to keep us busy.

It was a lovely 10 days- lots of scenery and interesting places, but of course we have also added other places to the list now (we think we’ll head back to Austria with a car so we can visit more of the smaller places).

Have you ever visited somewhere with a bad past? I remember going to Pearl Harbor (which also had people taking selfies all around)- it was a really sad place as the bodies hadn’t even been recovered. I know some people visited concentration camps as school trips but I don’t think I could actually visit somewhere that awful.