I’m already well into this week but thinking back to last week – on Tuesday I had a run with the club- I hadn’t been for ages due to the summer holidays and various other reasons, so it was great to run together. We made the most of the fading light (we meet at 6.30 pm so it is getting dark by the time we finish now) and headed to the lakes for a final run of the year before it’s out of bounds. Yoga on Wednesday was fab- it’s always different (and I have no idea what type of yoga it is) with a focus – last week we looked at using binds to hold poses for a big longer and in a deeper way. As always, much needed. On Thursday I felt a bit under the weather- nothing specific but really shattered. I had planned a run, but I got home much later and decided that I would walk around to the shops and pick up a few bits, and then after a shower and dinner, bake some banana bread. 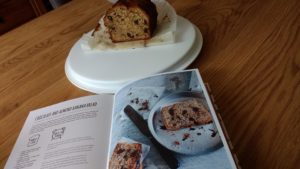 This was followed by some TV watching. After finishing Narco’s we have started to watch a true crime series on BBC called Storyville- Death on the Staircase. It is following the trial of a man being accused of murdering his partner- he says he found her at the bottom of the stairs. (Also, I feel like I heard a Criminal episode about this and basically it was an owl attack, so no spoilers because I don’t know if it is the same, but I am calling it!).

On Friday after work I was meeting a friend at The Waffle House- we are both teachers and always plan in trips at the start of the term as we know we will need the sugar boost! 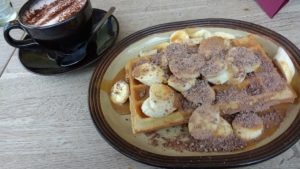 I’d already had too many cups of tea that day so I opted for a hot chocolate and the banoffee waffle- so delicious.

After getting back from parkrun on Saturday I felt a cold coming on- we did get some more fresh air but I felt wiped out so after going to look at the log storage at the fire shop I basically lounged on the sofa (this is not like me). I’ve been using a combination of oils to help de-congest (peppermint, eucalyptus and lavender) in my diffuser and on a tissue in my pocket. 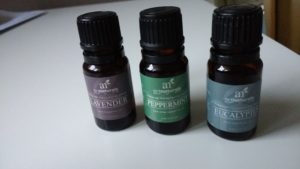 On Sunday I decided a run would not be a good idea- I probably would have been fine but my next race is a 10 miler in October so I have a while, and I didn’t want to go back to work feeling more tired. We walked the very long way into town (4 miles), bought a curtain pole and visited Andy’s parents. 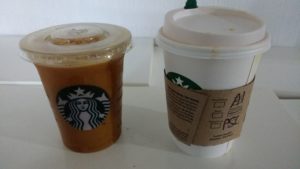 On Monday after work I stopped off in town- I had been sent a buy one get one free voucher so I got Andy a pumpkin spice frappaccino, and myself a hot one (no coffee- so basically steamed almond milk plus the spice syrup). I’ve had it before and it’s similar to a chai latte but a bit sweeter. Well, I think they may have changed the recipe- when I got home and took off the lid to drink it, this is what greeted me: 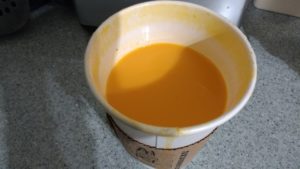 It literally (yes) looks like tomato soup. Hmm. It was OK but not as nice as a chai latte- we both agreed that we were glad we had tried them, but we are also glad I didn’t pay full price for them! Again I went on a walk after dinner to get some fresh air.

Onto the Clif bars: 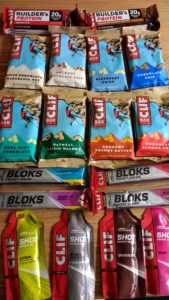 I’ve been a fan of them for ages- in the UK they used to only do three flavours (peanut butter, oatmeal raisin and chocolate chip) in smaller bars- I’d get them in the health food shop in town or order them from Wiggle. I’d always stock up if we went to the US and as you can get them more easily now I often have one before a race if we are away for the weekend and I can’t make toast.

I was contacted to see if I would be able to come along to a breakfast meeting hosted by Clif, with a “build a bar” event. I could not make it, so emailed them back, and they offered to send some bars out to me instead.

Andy did comment that the parcel looked like my shopping bag when I have been let loose in a Wholefoods! 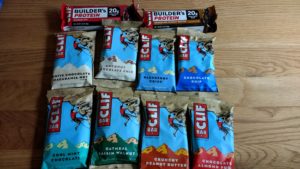 I was sent a selection of their bars in various flavours including coconut chocolate chip, and cool mint chocolate, and some of the protein Builder’s Bars. 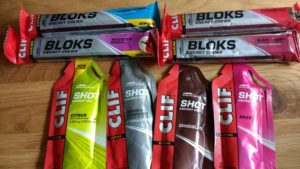 I was also sent some energy gels and chews- this took me back as for my first marathon I loved the clif shot bloks (the berry flavour), and I recently had a couple when I was running the London 10 mile race in Richmond as they had them as the aid stations.

The “normal” bars are my kind of thing- I like to put a cereal bar in my bag for “just in case”, or for an afternoon snack if I am going on a run after work (and then after a few weeks I will go through my lunch bag and find many many bars)- they will still be fine after getting squashed and sitting in the warm cupboard at work. The nutty ones are my favourite (and I still wish they would do the pb chocolate chip over here as that is the king of all flavours)- I find the fruity ones a little too sweet somehow. The Builder’s Bars are massive (68g) so I tended to have half at a time. They have a lot of protein (20g per bar) and they are filling. I always get a slight panic when I read the ingredients though- I know they are suitable for vegetarians but I always misread “beet syrup” as “beef syrup”and have to re-read it a few times! They will keep me going for a while anyway.

I am saving the chews as I do have a half marathon in November so I can take these with me on my longer runs, and I’ve not had a gel since I tried a few for the Stockholm marathon and didn’t really get on with them, so I can’t decide whether to try them or give them to someone who will definitely like them!

How do you know when to run and when to rest?  Are you a gel fan? What would be your ultimate flavour combo for a cereal bar?

*I was sent the Clif bars but all opinions are my own.

4 thoughts on “A week that flew by, baking, orange drinks and Clif bars”