Luckily we travelled back from Winchester last Saturday night instead of the Sunday morning. I was due to run the Festive Five (a local 5 mile race put on by the local running club) and then we had booked breakfast at Bill’s after- Andy was going to walk into town and meet me. The forecast was to be bitterly cold with maybe a sprinkling of snow, so I was keeping an eye out in case it was cancelled due to ice. Imagine my surprise when I woke up to a text message saying it was cancelled due to snow- I then looked outside and saw why! Everywhere was completely covered and the snow was still coming down pretty fast- you couldn’t see the kerb because the snow was already deeper. 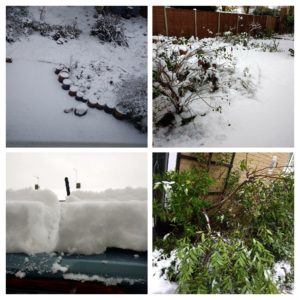 Crazily the big Hebe bush outside our front door (bottom right) had blown over and snapped due to the weight of the snow, and the aerial of my car was only just visible. I suppose I could have attempted a run, but it seemed silly as I wasn’t training for anything and the potential to slip over (or to just get so cold- my cough was still lingering). I tried to see if Bill’s would be open (I couldn’t find anything) so we decided to walk into town and see what was open. The walk took us much longer as the snow was quite deep, and we saw so many cars stuck, wheels spinning, skidding all over the place (and don’t get me started on the idiots that don’t properly clear the snow from their vehicles…)- had we not been able to walk in we would not have been attempting to go anywhere as it just seemed dangerous. As we got to town all the shops were open, and Bill’s was actually really busy. 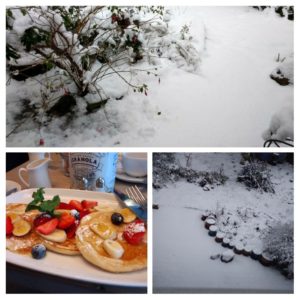 After a lovely breakfast (pancakes of course) we walked home and then I just had to make a snowman in the garden. 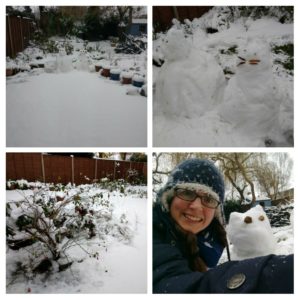 In the end I attempted a snow-lar bear and also a Snowtoro (Toroto of snow)- this proved tricky as the willow leaves for his whiskers kept blowing off! While I was having fun in the cold, Andy was busy making a fire in the wood burner. I had a fair bit of work to get through so I got on with that in the warm. 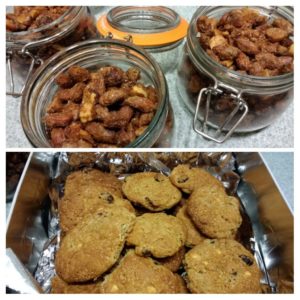 After that I did a bit of baking- white chocolate and cranberry cookies, some maple spiced nuts and the favourite, Christmas pudding fudge. I also got a few jobs done like finally labelling the lemon and ginger marmalade that I;d made a few weeks ago. 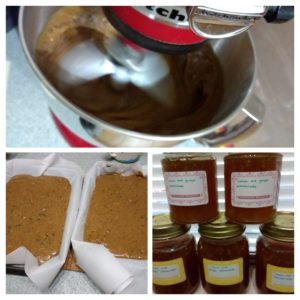 School was shut on Monday which in a way I was relieved about (I didn’t fancy driving in it) but it’s my day out of class so I lost a lot of time. I worked at home for a bit (with some candles on the windows to make it feel cosy) but I hadn’t brought loads home as the snow wasn’t forecast, and then later the internet at home went down so I couldn’t do a lot of things anyway. Late morning (to warm up after sitting in my cold office doing as much work as I could) I walked to the post office – the pavements were pretty icy. Andy had done a great jobs of clearing our driveway and the pavement in front of our house, but not many people had done the same so mostly the paths were slippery and icy. I saw more trees that had split from the weight of the snow too. It was an OK walk but pretty slow- I knew a few people who had been out for runs but again I don’t think the risk of a fall and potentially a broken wrist or ankle was worth it.

As I couldn’t do any more work, I got on with a few projects in the afternoon, including making a more natural room diffuser. I love having these as they are quite subtle, but I’ve been reading a bit about the amount of chemicals in them- the last one I bought was a Beefayre one which is a bit more natural, but I had thought I could make my own. I found this how-to guide, and used the old jar and sticks. 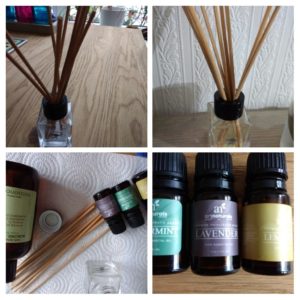 In the set of oils that I bought (it was a sort of starter set) it had a list of different ways to mix them- Christmas eve was made using lemongrass, lavender and peppermint, so I gave that a try, along with almond oil to dilute it. I’m pretty pleased with how it has turned out.

Late afternoon we headed to the cinema to see The Disaster Artist (which was really funny- I’ve not seen The Room and had only heard of it when we went to see Skid Row as the Prince Charles theatre is the one that shows it at midnight each week)- the sunset was amazing and all the fields covered in snow were so beautiful.

The side roads on the way to work on Tuesday were not fun at all (compacted snow that had frozen into smooth ice overnight) but thankfully the main roads were fine and most cars were driving a little slower than usual to be a bit safer. The pavements were still awful and so our club run was called off (which I totally agree with).

Did you have much snow near you? This was the most we have had here in years. Can you work from home? Which films have you seen recently? I feel like I’ve seen loads of fab ones recently- Battle of the Sexes (which I didn’t know the outcome of before I went, but really enjoyed), Paddington, The Florida Project, Disaster Artist…

10 thoughts on “Snow good for running in”