On Friday night I made the last minute decision to visit Letchworth parkrun. I had messaged my dad, but he was away for the weekend (and ran at Bakewell parkrun)- next weekend I am volunteering as it’s the day before the half marathon, and then they are off on holiday for a bit, so I decided to re-claim Queen of Herts, as this was the newest Hertfordshire event. They launched at the end of January to a big crowd (388) but since then numbers have levelled off a bit (135 last week, 136 this week). I’d seen pictures and it looked like a very muddy course, so the frost this weekend also added to my decision. It’s not my NENDY (nearest event not done yet)  as I live too close to London, so using the parkrun tourist tool (google it- you can add in your parkrun number, it looks at your location and shows the parkruns nearby) I still have 8 that are closer including Ally Pally) but it is the easiest one to get to (no idea what acronym that could have)- I just need to drive up the A1 a bit further than Stevenage. 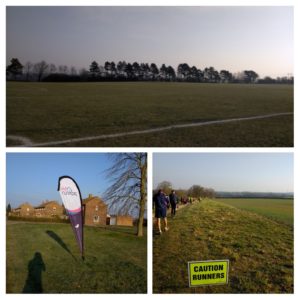 Thankfully the parkrun flag was on the verge by the road to direct runners into the park.

Of course as it was a last minute decision I hadn’t even looked properly at where to park. Their website showed a small car park, but when I looked into it, it was for 25 cars, so I didn’t think I’d find a space. Nearby were what looked like residential roads so I thought I would leave plenty of time and once I found the car park, drive away from it and find a space in the street. Of course I left later than planned, and had to scrape my car. Google maps thought it would be 30 mins, so I was going to leave just after 8am, but by the time I’d scraped my car it was 8.15, and then when I plugged in the satnav it said it would take 40 mins which was cutting it very fine. In the end the journey was quick, and as soon as I realised (by the road name) that I was on the road for the car park, I found a space and ran along- I was only a third of a mile away so no need to panic, and when I got there the car park had loads of spaces. It was a bit like a flashmob parkrun- at 8.50 there were hardly any people about- I chatted to another tourist for a few minutes (he’d come from Wimpole), but then as we headed across the field to the new run briefing, the field was suddenly packed with runners. The weather probably had a lot to do with that- I had on three layers and kept them all on for the run as it was freezing, and I would have waited in the car for longer had I known how close I was. 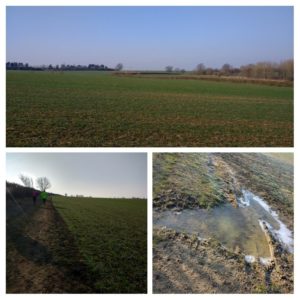 The course was really enjoyable. The run briefing started on some playing fields, but to start we walked through a gap in the hedge to farm fields. The route was two laps, running down the side of the farm fields (with lovely countryside views), along a track, then up the other side, then through some trees, a short section across the playing fields (I think this was a change from previous weeks as they were still working on the best route and welcoming feedback) before running along a path lined with trees at the edge of the field (then repeat). The ground was very rutted in places, with some huge icy puddles, and I would imagine that on wet days it would be really slippery and tough. A few people ran through the puddles and must have been in up to their ankles. Even when I was walking back to the car, any grass in the shade was still frozen solid and crunchy. I quite like two lapped courses as for the first lap the scenery is great and everything is new, and then the second lap you know you only have this and that to go before the finish. I stopped a few times to take a few pictures too, and was pleased to get in under 30 mins with 29.41. I’m sure I’ll be back as it is one that Dad would enjoy too- we like less laps and less busy ones.

Onto the Very Good Idea. A few weeks ago, walking back to my car after running at Panshanger I saw someone sitting in their car drinking from a hot flask. What a good idea! I usually take water with me, and although these parkruns do have coffee vans, the hot drink is then too hot to drink and so I would end up taking it home, where I may as well make one there. 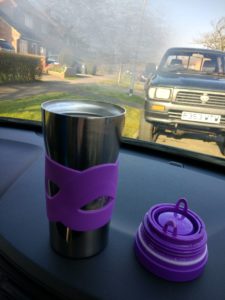 It was waiting for my in my car (not with the lid off…)- it did fog up the windscreen when I took the lid off though! I’d taken a jumper with me to put on after, so I put that on and had my tea quickly before driving home. It was so good to have something warm so soon after I had finished running- I shall be doing this again I am sure. 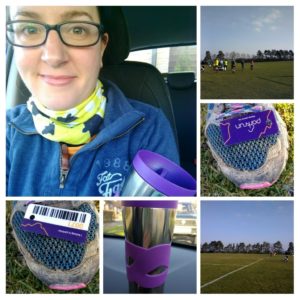 The other thing I liked was that Letchworth had new style finisher tokens- they are purple and say “I belong to parkrun” on one side, and “please return me” on the other side. This seems a good idea to me seeing how many tokens get lost each week.

After breakfast we quickly walked into town to get a few bits. I had a fair amount of work to get through, so I took my laptop into the dining room so I could look out at the garden (it’s also warmer there than in my office).

This may make the work take slightly longer as every time I would see something flitting about I would stop and look at it (the wren came back!) but it makes it more enjoyable.

Sunday was the final long run before the half next weekend. Ideally I wanted to have done another 13 miles (or maybe 14) in training, but last weekend I only did 10, so I decided to do 11 this week. I am terrible at knowing the routes at the moment, so the one I did ended up being 11.5 miles. All nice and slow (although according to Strava I have run it already and this time was faster)- once home I had a short amount of time to shower and have breakfast as we were off to see I,Tonya (which I found very interesting).

So, another parkrun visited and I re-gain being able to say I’ve done all of the parkruns in Herts. However, I didn’t need it for the parkrun alphabet as I already have already been to Linford Wood (Milton Keynes).

5 thoughts on “Letchworth parkrun and a Very Good Idea”