On Friday after lunch we headed down to Brighton. The train takes just under 2 hours, so as soon as we arrived we checked in to the hotel and then headed out for two Brighton essentials- tea lattes from Bluebird tea (I got the Earl Grey creme latte which reminds me of the gorgeous London fog lattes you get in Canada), and a walk by the sea. 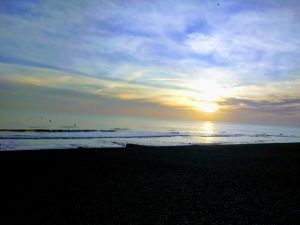 The weather was perfect- clear skies and no winds so the sea was like a millpond. We walked along to the beach huts by Hove and then walked back and went for dinner.

I didn’t actually sleep that well- the room was warm despite having the window open, and it sounded like lorries going past (I think it was rail replacement buses from early in the morning), but of course I was off to parkrun in the morning.

I’d been to Preston Park before, and last time tried to keep up with the 28 min pacer, and finshed with 27.55. I thought I would aim for something similar as a measure of fitness, and when I got there it turned out they were having a pacing event.  It was super busy though, with (I think) their second highest attendance of 588 as they had events from several running clubs on. Anyway, I could not see the pacer once I got to the start area, although they do have signs up near the start area to help you know where to line up according to your estimated finish time.

It was the perfect morning for running- nice and cool, sunny skies, no breeze, and I think all of the super speedy runners somehow pulled me along. I didn’t look at my watch at all, but just focused on keeping a high pace and trying to overtake the person in front, steadying for a bit and then going to overtake the next person. I was pretty surprised when I peeped at my watch a few metres from the line and saw a 26 on there! 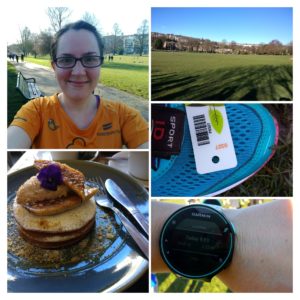 My official time was 26.47! Anything beginning with 26 is a rarity for me so I was over the moon! I had offered to write the run report, so it’s here if you are interested. After finishing I jogged back to the hotel, and after a shower it was time for breakfast at the best place- Cafe Coho. They always do amazing pancakes- the last few times I have had them with berries and greek yoghurt, but I spied a new option this time- caramelised banana, chocolate marscapone and hazelnut praline. Oh yes. It was really good, but very sweet (obvs), so I think probably the more sensible choice was the berries. Anyway, good to try. 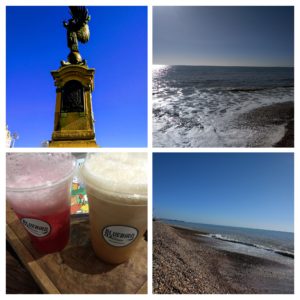 The weather was just as beautiful, so we walked along to Hove, then back along the seafront, this time getting iced drinks from Bluebird (we shared a strawberry lemonade and an iced chai as decisions are too tough in there).

As we’d had a late breakfast, we didn’t have lunch, stopping for a bit of tea and cake a few hours before dinner, and then we got the train home on Saturday evening. I ended up with a headache, I think probably from not drinking enough, so instead of my planned 13 mile run on Sunday I thought I would see how far I would manage.

I was actually OK when I woke up on Sunday but I went out a bit later than planned (around 9am) so I did just under 10 miles. 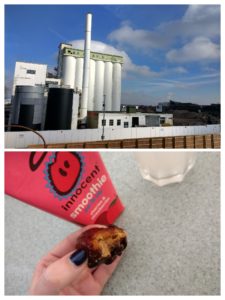 When I got home it was time for a nuun tab in water, a smoothie, and a date filled with peanut butter- these are quite salty because I made with the peanut butter at the bottom of the tub and it all seems to sink there. That was enough to keep me going so I could have a shower before breakfast.

As it was such a lovely day we had planned a walk for Sunday afternoon, and we ended up doing 5 miles, so I still had a lot of time on my feet. 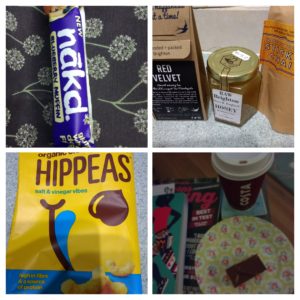 The rest of this week has been very busy with work things- I managed one run after work on Tuesday, and a couple of walks in the evening, but yoga wasn’t on and I was home too late for a run on Thursday. A few photos: (Clockwise from top)-I tried the blueberry nakd bar and was pleasantly surprised- I don’t  always like blueberry muffins as the blueberry flavour can be a bit fake/sweet. A few Bluebird purchases including lovely red velvet tea. Wuntu were doing free Costa drinks so I stopped on Friday on my way home. Crisps made with chickpeas- I approve of the salt and vinegar flavour!

What do you have planned for this weekend?

2 thoughts on “Another lovely weekend in Brighton (and a course pb!!!)”