For May half term we had a bonus day for the Jubilee (the Friday before), which meant plenty of time to train it around Europe.

First up were a few days in The Netherlands, visiting The Hague, Rotterdam and Amsterdam. The main reason for The Hague was to complete my parkrun alphabet, but I am so glad we went there as it was just wonderful. 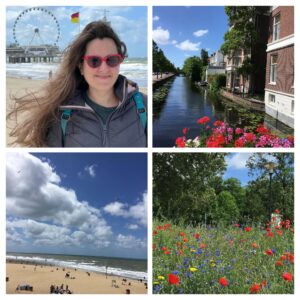 The city centre had lots of pretty buildings, and loads of canals, lots of parks and green spaces and then by the coast a huge beach.  We did have a slight problem in that we popped into a shop (AH I think it was called- there were lots of them around) to get some water and snacks and found out they didn’t take credit cards- we hadn’t taken much cash as you just never need it.

The cities were all easily navigable by public transport- trains between cities and then walking of the tram to get around. 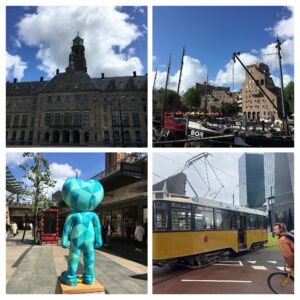 I really liked the cute little “tourist trams” in Rotterdam- they looked like the ones from San Francisco! 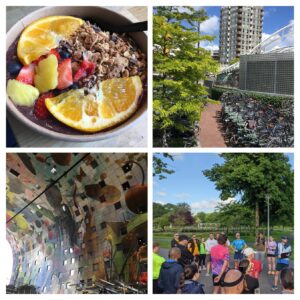 Rotterdam had a port to wander around, and a huge hall filled with food stalls and market stalls. I couldn’t resist the acai bowl. We found an awesome vegan pizza bar (even better than Purezza pizza we both decided) for dinner. 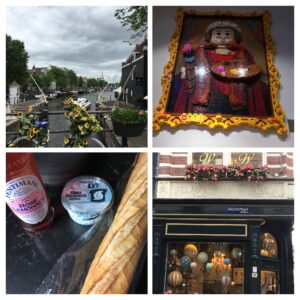 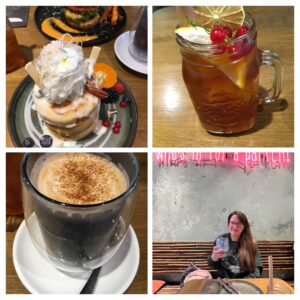 We found a vegan pancake place (Mr Stacks) which was just so good. We got one savoury and one sweet to share, and that was a very good idea.

After a few days it was time to get the train over to Paris- we’d booked (you have to) and so got some lunch bits to take on the train as it was around 3-4 hours.

Then we had a few days in the parks! We do go on rides but also are happy to wander around and enjoy the atmosphere, but over the 3 days we managed to go on all the rides that we wanted to. I have to say that although I love Florida, DLP do the catchiest tunes. There were rainbow flowers to mark the start of Pride month. 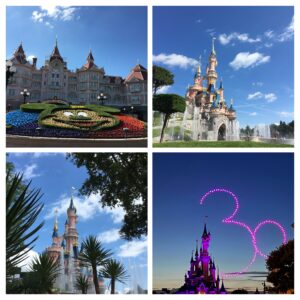 DLP. That bottom left picture is from the pre fireworks show where they use drones to make various shapes in the sky. It’s pretty amazing.

DLP were celebrating their 30th anniversary so it’s a great time to go as there are extra events, extra shows, extra parades and also extra food items. The extra parade was pretty special, with cast members dancing down Main Street, characters following in floats, and then they all got up onto stages in front of the castle and danced (for ages!)- they even rotated around so you could end up being close to all the characters at one point. 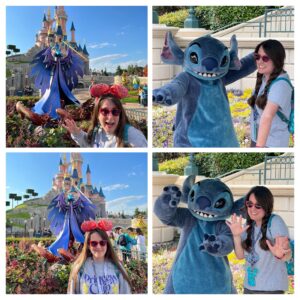 Character meets were back! Last time you had to stand back and also still wear a mask, but this time that was all gone and I got to hug Stitch! The queue was quite long but it was entertaining as he’d interact with each guest in a different way, pretending to eat their pen or adjust their ears or run away. 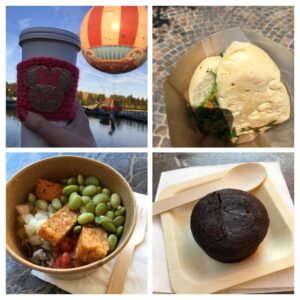 Top tip– don’t buy a tea in the park as they are small and super expensive. Go to the Starbucks in Disney Village for huge cups plus plant milk.

They did a special vegan panini for the 30th with vegan cheese and loads of veggies. There were food stalls in the studios, including a Vegan Kitchen- the poke bowl from there was tasty, but the star was the chocolate cake as they warm it up for you and it is so good- more like a brownie in a way.

Of course I was very excited that Dole Whips were on sale (historically in DLP they were not the same, they were horrible whippy ice cream with pineapple mixed in)- actual pineapple ones! Although the café was hidden from the path- we had a few people ask us where we had got them from.

We also tried the vegan fish and chips as Andy was quite intrigued. Neither of us like fish (obvs I don’t eat it but I never liked it when I was a child) but thankfully the filled didn’t taste fishy, just sort of like battered quorn. 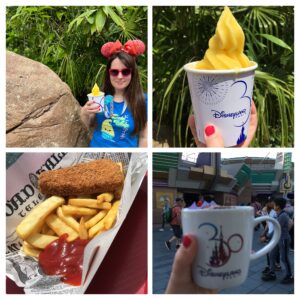 Yes I have my Dole Whip t-shirt on. When in Rome…

I also bought  one of the mugs because I liked the design. It came with chocolate cake, but what they did was scoop some batter into the mug and microwave it. It wasn’t vegan so Andy ate it, but he wasn’t that impressed- it was very pale looking! The chocolate cake in the studios was much nicer according to him.

After a few days there it was time to get the train back to Paris to get the Eurostar home. What a wonderful few days.

Did you enjoy the Jubilee Bank holiday?