During September I was mainly visiting Panshanger parkrun due to various factors (Dad being away so not visiting Jersey Farm, not having the car so needing to go to one I can get to on foot), but I also fancied a bit of tourism. I know I won’t be getting to my Cowell (100 different events) this year, but I am inching closer.

I was looking on the 5K app (now that the tourist tool seems to be gone) and noticed Harlow parkrun (not to be confused with Harrow parkrun). It isn’t new, but for some reason I had not scrolled in that direction before. It was around a 25 min drive so one weekend in September I headed off on a solo tourist trip. 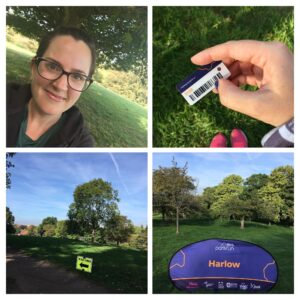 It was very easy to find following the course page directions. The car park was right by the start- the car park is in a dip and the park is sort of around and above it, so I headed up and out (with the exit on my right) and saw the parkrun sign straight away. I was there fairly early so did a short warm up run but as it’s quite twisty I ended up going back on myself a bit.

The course sounded a little confusing, but it is basically two non identical laps, with the second lap being slightly shorter (and avoiding “the hill” of the golf course section (which isn’t in their winter course- a course that seemingly the regulars prefer). There was an out and back lollipop section too, but really just think of it as two laps. It was well signed and with lots of marshals.

It was a really good day weather wise- the beginning of autumn, so I took it fairly steadily and stopped for photos as I ran around. I can’t believe that I’d not been there before, as I think it’s been going on for a similar amount of time to Panshanger. Of course being able to run to a local one is fab, but this was a short drive.

So, my 88th venue visited. Slowly getting closer to the big 100 venues!