A while ago I was contacted by Stork, to see if I fancied creating any of their cakes using their new Stork with butter.

Well, I came across this amazing looking owl cake, and knew I had to have a go. 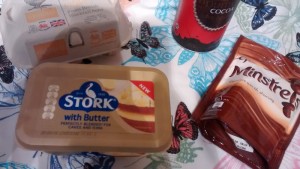 They kindly sent me a voucher for the ingredients, so after buying what I needed, I set to work. Making the chocolate cake was fine- I liked the addition of the milk and lemon juice- you do that in a red velvet cake to imitate buttermilk and it makes the cake lovely and light. I baked it for less time though, but that might be down to my oven.

Then, the fun part. 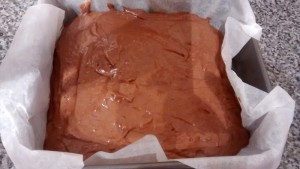 I kept the cake in the baking paper (I did loosen the paper) because my only tin big enough for a plate was at school after the bake sale. 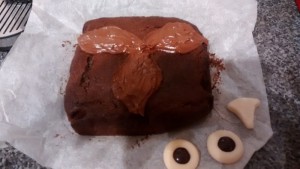 I made the owl eyes and beak with marzipan, because I like that more than sugar paste (and a minstrel for the centre of each eye). I put the first batch of buttercream on, and then disaster ensued. Basically, my kitchenaid mixer has two switches- one to raise and lower the top of the unit, and one to turn it on. I had raised the unit to add more cocoa powder to the icing (to make it darker) but instead of switching the right one to lower it, I moved the left one which turned it on. Now, you might think that it would not work if the unit was raised. Well, it does. So it sprayed chocolate buttercream all over me, all over the kitchen, all over the floor. Argh! 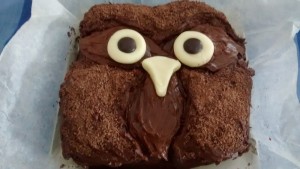 Anyway, after stopping to clean up, I added the darker buttercream, and then some grated chocolate.

It was very well received on Sunday. I was really pleased with how it turned out. It looked very impressive, but actually (with a bit of patience) the end result was fairly simple and I would certainly make it again.

*I was sent a voucher to cover the cost of ingredients. All opinions are my own.