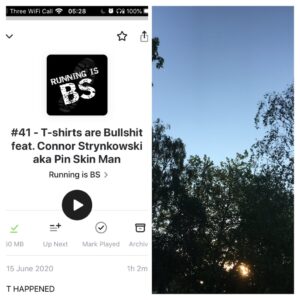 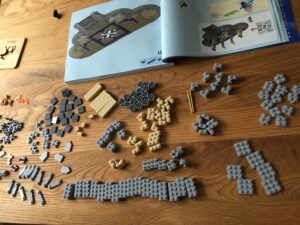 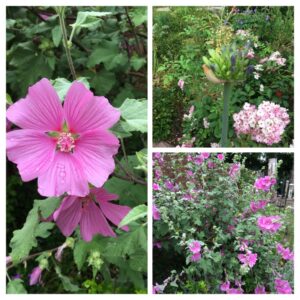 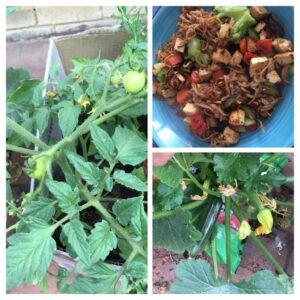 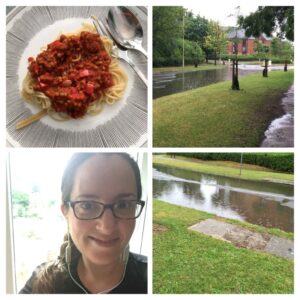 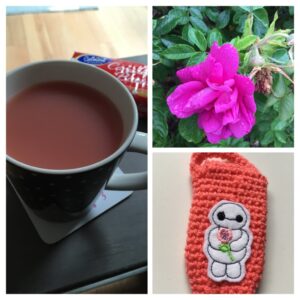 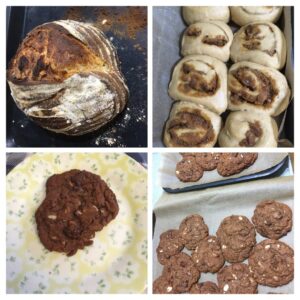 When we went to the giant gingerbread house in the Disney Contemporary hotel, we bought a couple of cookies including a chocolate peppermint one. This is my attempt at re-creating it. I based it on this cookie recipe, and oldie but goodie.

Preheat the oven to 180C and line two baking trays with baking paper.

Cream together the butter and sugars.

Add the egg and peppermint extract.

Sift in the flour, cocoa powder, salt and chocolate chips.

Spoon the mixture onto the tray- walnut sized balls approx.

Bake for 7-10 minutes- until pale golden in colour-they will continue baking on the tray for a little.

Leave to cool on the tray. 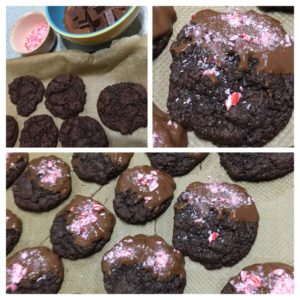 I was really pleased with how they turned out. For extra mintiness I think I would add a bit of peppermint extract to the melted chocolate. 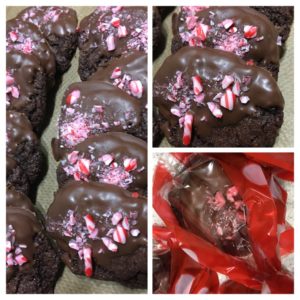 I bagged them up and gave them as little gifts for my team at work- they seemed to go down well.

Do you like chocolate peppermint? When we went to Boston we had the most amazing chocolate candy cane cheesecake, which sounds strange but it was delicious.

I have been making this fudge for years, but realised that the recipe on my blog needed a little update as I now use a stand mixer for the mixing at the end (instead of a hand whisk in the pan). 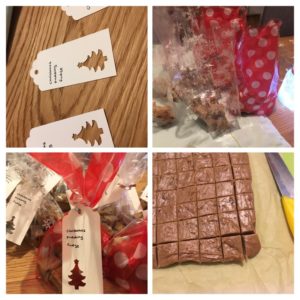 It does sound a bit difficult, but I think the key is preparation (having everything ready before you start).

The recipe is a combination of one from The Pink Whisk website and one from a Rachel Allen cookbook. 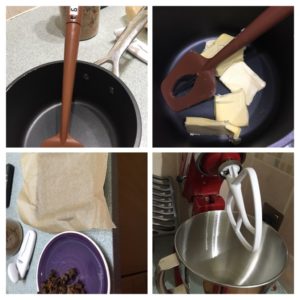 Preparation! I use my stand mixer so I put the attachment in and turn the plug on. Line a baking tray with baking paper, weigh out the ingredients and cut up the pudding and leave it on a plate (the pieces don’t need to be small because the mixer will mash them up). 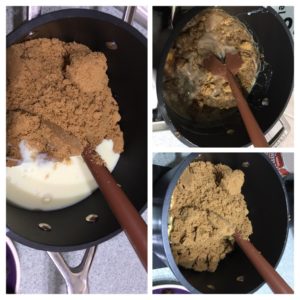 Put the butter, sugar and condensed milk in a pan and heat gently, stirring regularly. 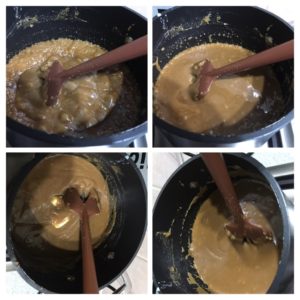 It will eventually bubble away and appear more smooth. The sugar thermometer needs to reach 235F. Once it reaches that, leave it for a few seconds before pouring it (carefully- it’s very hot) into the stand mixer. 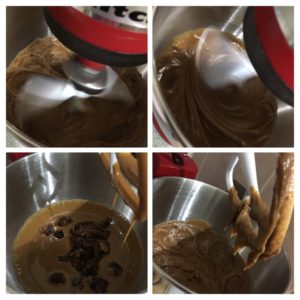 Turn on the mixer and whisk away. It takes a while, but eventually the mixture will thicken- if you stop the mixer and lift up the attachment it will leave ribbons in the mixture and drip slowly off. Add in the Christmas pudding and mix a little more until it is evenly dispersed.

Pour into the lined pan and smooth the top- it won’t set too quickly so you have time to even it out. Leave it to cool for a few hours/ overnight, and then cut into lots of little squares ready to put into little bags.

Do you like to make gifts? What is your favourite fudge flavour? I do like peanut butter and chocolate fudge, and I am tempted to do a different festive one with maybe cranberries and white chocolate chips.

If you make it, let me know how it turns out!

I have still been loving the Bake Off. Yes, I love Mel and Sue and I miss them (and Mary) but Noel and Sandy are funny too. And really I watch it because I find it so relaxing- I don’t mind who goes home or who wins. I like to see them bake new things and decide that I will never attempt something that looks such a faff (mini swiss rolls) or maybe give something a go (I think the first time I tried to make a Battenberg was because I had seen it on Bake Off). Anyway, the other week was caramel week and inspired by it (because I think they made it look harder than it actually is) I have created my own recipe for peanut butter caramel slices. 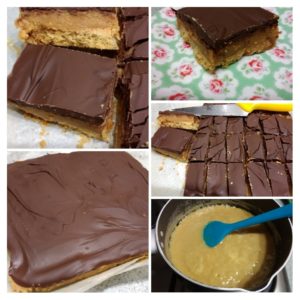 Preheat the oven to 180C

Cream together the margarine and sugar for the base. Stir in the flour and oats, then press into the bottom of the tin.

Bake for around 25 minutes until golden 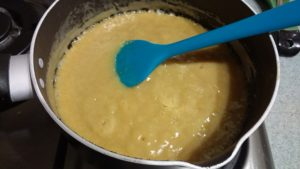 To make the caramel, put the butter, sugar, condensed milk and syrup in a pan. Gently heat and stir for around 10 minutes. The mixture will bubble but it should not spit. It will gradually turn darker as it thickens. I don’t use a thermometer for this bit- to test if it is thick enough put a little blob on a plate, leave for a few seconds and then push it with your finger to see if it has thickened. Once it has thickened, turn off the heat and stir in the peanut butter. Pour the peanut butter caramel over the base and leave to cool. 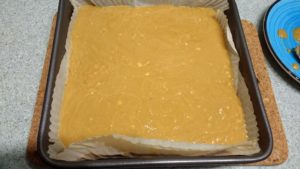 To make the topping, melt the dark chocolate (I have a nice thick bowl that I can use in the microwave) and then stir in the peanut butter. Pour over the caramel and leave to set again.

Once set, slice and enjoy.

Do you like caramel slices? What would your ultimate flavour combination be? 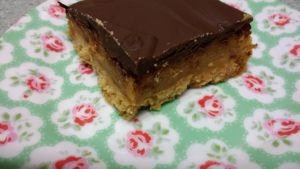 A while ago I was contacted by Sainsbury’s to see if I could make a visually stunning salad, as they have teamed up with food artist Amber Locke to encourage people to be more creative with their salads.

At the moment we have been enjoying halloumi cheese, often grilled with a salad and some quinoa. Then on Sunday after the 10K we went to Bill’s and I had one of their specials which was a salad with grilled honey peaches and halloumi. The sweet fruit and salty cheese went so well together, so we decided to make a similar version at home. 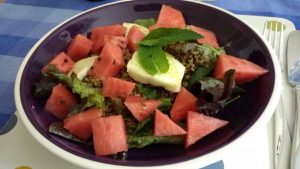 For two servings we used:

Watermelon, cubed (we bought a whole one, but had loads left over)

One pack of salad leaves

Half a pack of halloumi

A sprig of mint leaves

It was very quick to prepare:

Slice the cheese and put in a pan, Heat for a few minutes on either side.

Heat the pouch of quinoa in the microwave.

Assemble on the plate. 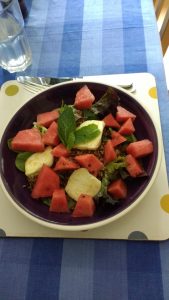 I loved it and we both agreed that it is something we would make again. The watermelon and cheese just went perfectly together- I think the texture of the watermelon was even better than the peaches at Bill’s. It was also good to have a mixture of warm (quinoa and cheese) and cold (salad and watermelon). I don’t normally think to add herbs to salads either, but the mint just went so well and I am glad we used it. Andy did comment that we should have bought some blueberries too, and then it could have been a 4th of July salad (we had it on Monday) but we were eating it by then- maybe next time!

Do you like cheese and fruit in salads? Or salads with warm and cold ingredients?

*I was sent a voucher from Sainsbury’s to cover the cost of the ingredients. All opinions are my own.