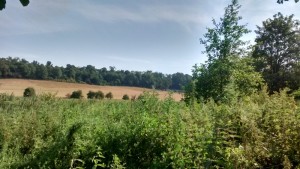 The start was just visible to me, where the brown field ends, next to the tall trees, but ant-sized people did not come out on my phone. I just love how the whole course looks though.

Hooray for the weekend- I am already looking forward to a parkrun tomorrow morning, and this weekend I will be running it (and doing the new runner briefing- eek!)- last weekend I had decided to marshal, because I had the 10 mile race the next day and it was going to be hot. I know, I could run it gently, but it is easy to get carried away once I start, so I decided to be sensible.

I was really looking forward to it- I knew some OH ladies were coming along, and I had promised them an extra big cheer. I was there at around 8.20 in the end (normally you have to park a bit away, but the marshals can use the car park at the start)- I had left earlier too because I knew I would need to help with set up and allow time to walk to the marshal point. 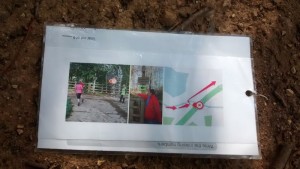 They are so organised there- every marshal point is numbered, and each marshal gets a laminated (the teacher in me loves anything laminated) map, a photo showing where to stand, instructions as to how to direct runners, and phone numbers of the run directors- love it. After handing out the other ones, I was sent to the point about half a kilometre from the end. On the way there, I came across a dead rabbit on the path, but luckily one of the people setting up was heading past so I asked him to tell the run director- I didn’t think it was that nice to be on the path, and someone moved it. 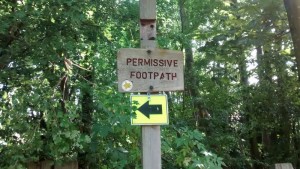 As the laminated photo indicated I was to stand under this sign.

After walking there, I had a while to take some photos before the first runners came through (at around 9.15 I think – so impressive). 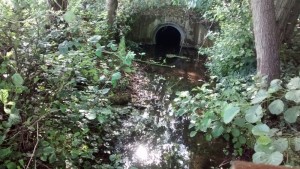 It really is so pretty there, and so calming too. 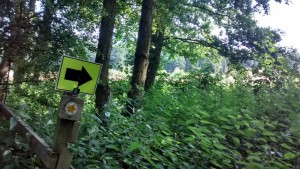 I had to direct the runners to their left, and then right at the next arrow. But of course for the most part they are following the people in front. I was cheering and clapping each person that came by- it was a hot day and so I was impressed with everyone running. Because they were coming out of a field and into the wooded area I could tell people that they had a nice shady section before the final “slope”- one person told me I knew just what to say to the runners! 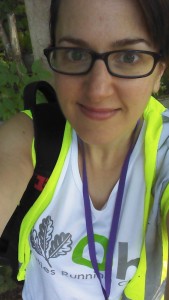 All ready with my high viz, lanyard of info and rucksack with water, very glad to be in a shady spot.

I saw some of the OH ladies- for some of them it was their first visit to Panshanger so I wanted them to enjoy it- at least they were all smiling when they passed me so I am hoping they will come back (and one of them got a bonus high-five for extra energy)! I do love how many runners say thank you (or gasp it- I know what that’s like)- I always try and say “good morning/ thank you marshal” to each one, and it is so lovely being on the other end of that too. After the first couple of runners, people were coming through in a steady stream, but after around 25 minutes of constant runners, it started to tail off a bit. One man went the wrong way (only a few steps) so I had to call him back, but he was very thankful and scolded himself for not looking at the arrow properly!

After the tail runner came through, I shut the main gate and unclipped the signs before walking back. The OH ladies were at the top so I had a quick chat and congratulated them for running in the heat, before taking the signs back to the car.

I know I keep on about it, but honestly parkrun is one of my favourite times of the week. The running is part of it, of course, but really it is the whole atmosphere of everyone enjoying being out in the fresh air, everyone supporting and encouraging each other, children and people of all ages and abilities getting outside and being active, and the core team who run it every week. On Saturday it was the run director’s birthday! How fantastic that he had decided to come to parkrun on his birthday- I don’t feel I know many people there, but he is in one of the bigger clubs and so I suppose it’s even more social. I shall keep on persuading my OH ladies to come along there.

Weekend plans? I am feeling super jealous of all the teachers who finished today! We go on until the middle of next week. Anyway, after parkrun tomorrow morning I am off out for lunch which should be lovely.