The other day I was looking at my race calendar (I keep links to all of my race recaps on a page so I can easily see times etc), and worked out that the 10 mile race this weekend would be my 45th race! I would not have guessed that many. Now I know that, I want to make it to 50 before the end of the year. That sounds easy and I have three 10K’s booked, but not many free weekends left after those (and of course,  I need to find ones I can travel to easily). We shall see…

Anyway, Sunday morning I was off to the Ware 10 mile race. For the past two years I have completed it, but usually it is in the autumn. This year they moved it to the summer, to be part of the festival of running. They had free kids races, and had added a 10K, so it had even more of a community feel. I was worried about the heat because a lot of the course is not in the shade, but the weather was on our side.

It is just the sort of low key event that I love- turn up 45 minutes before, pick up your number from the tent, drop your bag into another tent, and have a chat to other runners before the start. There were some port-a-loos, (no queues) but I do not like to use them, so just distracted myself by chatting before the race started- it’s all nerves anyway!

Lots of OH ladies were doing the 10K, so we had a team photo before the start, and then they cheered me on, as the 10 mile started about 15 minutes before the 10K (which seems much more sensible- at the St Albans half the 5K goes an hour before the half, so that people are collecting their bags after finishing the 5K just as the half marathon runners are dropping bags off).

Like my jazz hands? This was me excited before the start!

Anyway, the route was slightly different in a few places, but basically two 5 mile loops- the first 2 miles were hilly (including some very short sharp steep ones) and the last 3 miles were flat, around playing fields and along by the river- such lovely views.

As always, there were marshals everywhere cheering everyone along. I wasn’t aiming for  pb because I don’t run well in the summer, and have not run much further than a 10K since the half I don’t think. I started with my running buddy, but she is a bit faster so headed off after a mile or so. I was going OK- I wanted to keep under 10 minute miles and mostly I was managing it. Going along the river at the end of the first lap I caught up with a group of Fairland Valley runners, so I stayed at their pace, but then as it was hot I decided to stop at the half way point water station to have a few sips of water, so I lost them at that point. I got a bit of a stitch after that, but the marshals helped (it’s the last time you have to see me/ think of the cake etc)- I walked a few steps of the steepest hill because the stitch wasn’t going and one of my calf muscles was getting tight, and the lovely marshal at the top told me this was the furthest point from the finish, so every step was a step closer to cake. The cake is a big thing in this race!

After that was out of the way I picked up the pace again, and caught up with the group of runners by the river again. Then, as I came into the field to do the final loop, all the OH ladies (who had finished their 10K’s) were cheering me on in different places- it was lovely to have that boost right at the end.

My lovely running buddy had finished a few minutes ahead of me, so she bought us some cake and we had a photo- the homemade cake is mostly the point of this race! 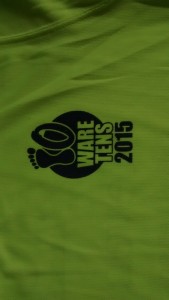 I can’t flip the photo around, but I am sure you can see it!

I picked up my lovely high viz t-shirt too- the size was written on the number so they were ticking them off- very organised and it means that even if you finish last, you get the right size. 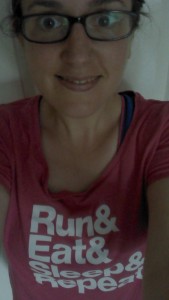 In anticipation of the rain I had packed a t-shirt to change into for the journey home (excuse my expression here- not sure what that’s about)- although it was dry, I was glad to take off my vest. 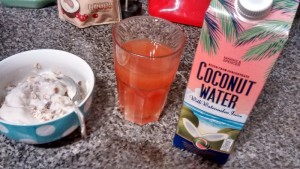 After a shower I had a snack of muesli and yoghurt, plus watermelon coconut water, as then I was off for afternoon tea. I didn’t even take a photo of the afternoon tea, but it was perfect to lounge around and catch up after a busy morning.

I think 50 races before the end of 2015 sounds like something good to aim for. My running buddy is aiming to do 50 half marathons, and is well on her way, so perhaps that would be the next one.

How many races have you completed? Do you have a particular goal in mind?