Since getting back it has been hard to get into a routine. We landed at lunch time on Monday, and I felt pretty rubbish that afternoon (I think a 10 hour overnight flight will do that to you). Of course, even though I was tired, I ended up waking up at 1am, after only a few hours of sleep, and despite my best efforts I just could not get back to sleep. On Tuesday I met friends for breakfast, went in to work, and had planned a club run that evening, but I felt shattered and gave it a miss.

Wednesday I went out and did 3 miles on an out and back route. Heavy rain was forecast, but it didn’t start until half way into my run. Then it poured so hard that my t-shirt was sticking to me and my feet were squelching. Luckily I had worn a visor so I had a little vision through my glasses! Andy saw the rain and left me a towel at the bottom of the stairs before he left for work- I had to take everything off as water was pouring all over the place. I was so cold I put on some old clothes and had some tea before a shower. I quite enjoyed it, but it felt quite hard, although I am blaming the lack of sleep for that.

Thursday I spent all day in London with friends- if I was home in time I would have gone to body pump, but I was back too late. 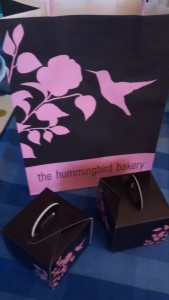 We got cakes from Hummingbird, and I took one home for Andy, although annoyingly I was given black bottom instead of red velvet for him. 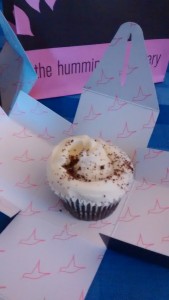 Friday I went out first thing (making the most of the last few days of holiday). I decided to do a 6 mile route, out and back. The weather was nice- it was breezy and sunny but not too hot. I was catching up on old marathon talk podcasts, and although I do enjoy my “me” time, it gave me too much time to ponder. I felt like I was plodding along, and wanted to stop and walk, and although I don’t run to time, I did wonder how on earth I ever managed a 10K in under an hour. I know it was down to tiredness (and I will have lost some fitness as I think I ran 6 times in 3 weeks on holiday) but I was just a bit grumpy when I had finished. 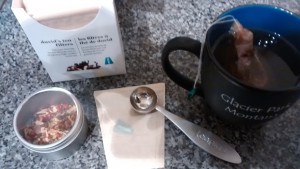 I have been using my tea pouches (there was a David’s Tea in San Francisco- I only came across it on our last day)- I do have some mini infusers but sometimes a teabag is just easier, so these are perfect for working my way through my piles of loose-leaf tea.

Saturday was parkrun day! Hooray! I knew a few of the ladies from the club would be there, so it was lovely to see a few of them before we started running. It gets a bit bottle-necked at the start because you run through some woods, and I didn’t see any of them whilst running, but I just enjoyed being out there by myself. I had no idea of what time to go for, and pushed my Garmin around so that I could not even glance at my pace. I had forgotten how hard the finishing hill is, but of course after a few minutes of getting my breath back I was fine, and good to chat with the other girls about how their running had gone. When I looked later on Strava I was pleased to see my mile times as 9.38, 8.42 (a big downhill bit here but often I find I slow in the middle) and 9.09. A bit erratic I suppose but the course is up and down so it would be hard to get gradually faster. 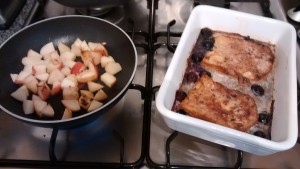 I attempted some baked french toast as I thought it would be easier than cooking it in a pan- not sure if it was. I used half a mini pannetone (I had a sort out of our cupboard and found it, and some Easter eggs- they need to be eaten), basically I beat together an egg, some almond milk and some vanilla extract, put the sliced bread in there with some blueberries, and left to soak while I was at parkrun. Then before I got in the shower, I put it in the oven for 30 minutes. I cooked an apple to go with it, so I don’t think it saved time in the end! 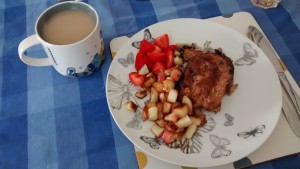 Later on, we walked up to Sweatshop, as while I was away I had received an email from Panshanger parkrun saying that I was the monthly prize winner! I was very chuffed indeed. (Each parkrun chooses one person each month, and that person gets to choose a new pair of trainers from Sweatshop). 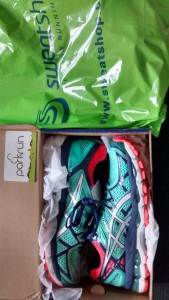 I wore my current trainers there, as I have been getting on really well with them, and they advised me to keep to the same style- luckily they still had the same model, so I have a second pair now. Thanks lovely Panshanger event team!

Sunday I was busy marshaling at the triathlon- again I thought I might run after that, but I didn’t finish until midday, when it was estimated that we would be done at around 10.30, and then I had to collect some orders from shops, have breakfast and so I didn’t fancy it.

But having a three day weekend meant I had another chance for a run. The weather again was forecast as heavy rain, thundery showers- not really the best running weather. The club was having a “Bank Holiday Special run” at 8.30, but I didn’t set an alarm as I wanted to try and sleep a bit. In the end I was ready to run at 8.25, but I would not have had time to drive to their meeting place, so I went out on my own. It wasn’t raining when I left, but I knew it wouldn’t be long. I had no idea of what route to do, and could not even decide how far to go. I didn’t fancy the out and back from Friday, I didn’t want to go on the fields because of all the mud, so I decided to head to an old Sweatshop route, the dreaded “hill” route. As I was running I just felt much better. I have no idea if it was the cooler air, or having a longer sleep, or a combination, but I felt like I wanted to keep on going. At the point where I normally loop back, I realised that in our OH runs we sometimes arrive at this point from another direction, so I checked the maps on my phone and decided to keep on going. At one point I did worry because I didn’t recognise the road, but of course everything looks different from the other direction. At least I knew that if I got really lost I could retrace my steps, but I didn’t need to. I could have gone further, but it was raining, and every minute it was getting harder, so I decided to head back. In the end I got home with exactly 6 miles run, and I am quite pleased to have made my own new running route. I felt brilliant when I got home. It wasn’t a fast run, but it was enjoyable, and I felt like I could have carried on for much more.

At the moment I only have 10k’s booked for the autumn, but there is a new 10 mile race in Brighton, in October, so I am trying to decide at the moment whether to sign up or not. Pros- 10 mile distance is great, Brighton is great, new race is always great. Cons- would have to travel the day before, probably have to drive because the trains are not running all the way through on the Sunday, hotels might be expensive, don’t have many free weekends to catch up on work…..

What are you looking forward to about autumn? I feel like now it’s September, I can mention it!  Although I love sunny days, I do find that I run better when it is a little cooler, plus it warms me up for the rest of the day, instead of making me too hot.

10 thoughts on “A run in the rain, feeling better again”