-That was what one of the triathlon finishers asked as they crossed the line. Those triathletes are a fussy lot!

So, this morning I was up bright and early (the briefing was at 7am) to marshal the Hertfordshire Triathlon. The company (Active Training World) organise lots of local races, and so had asked our running club if they could provide marshals for the event, as they had done for previous running events.

We were sent a lot of information before the race, and a link to the guidance that the competitors receive. My first thoughts were “triathlons have so many rules”-  I think I would have trouble remembering them (swim hats on/ wet suits on/ in the water/ in the transition area/ helmets on/ foot down places/ numbers on the back for the bike ride/ front for the run…).

I knew I would be somewhere on site (some marshals had to go to parts of the 20/40km bike route)- between the run and bike bit, so I had time to soak in some of the atmosphere. It was exciting to be there at the start, to see all the bikes in their racks (along with piles of clothes/ trainers/ drinks etc). I did not envy the people about to swim in the lake though! The briefing was thorough and I was stationed at a “foot down” point (it’s all new to me, so I am going to explain it as I understand it, apologies to any triathletes wincing as they read this)- basically the cycle route was on open roads, so as a safety precaution where they entered the main road (just after the swim) there was an orange line on the floor- they had to come to a complete stop, and put one foot on the floor, before checking for traffic and entering the road. It was explained to us that it was for their safety, but we were to note down the numbers of anyone who didn’t adhere- either by not stopping, by not putting their foot down, or by stopping beyond the line. 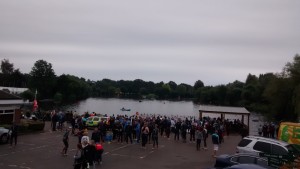 The lake did not look inviting at all!

There were two distances going on- I think the longer ones went off first, but they all did the same, but if you did the longer distance you did 2 laps of the lake, 2 laps of the bike course, and 2 laps of the run course (don’t know the length of the swim, but the cycle was 20/40km, and the run was 5/10k).

I thought I would have loads of time, because the swim race started at 7.15, and of course they have to change too, but it wasn’t long before the first cyclists started coming. Another marshal was with me, and in the end we got in a good routine, with one of us shouting “slow down, stop before the line” and then one warning them “look over your right shoulder for traffic”- so many of them were looking left and not looking at the cars on the road at all. The stop was clear- there was a marshal about 10 metres before us, a big yellow sign, us two marshals on the line, and an orange line on the floor (and they had been told about this in the briefing and in their event pack)- it did surprise me how many people were not stopping until we shouted. Not long had gone by before the official referee (or something, whatever they are called) came and watched us for a bit- that was a bit stressful! I hope we were doing it right! We had to report any non-foot downs to her, and she would decide on time penalties, or disqualify people. It felt a bit awful to think about people being DQ’d, but she explained that they all know the rules, and it is for their safety. One guy didn’t stop at all, and then we realised he didn’t have a number, so we had to describe him to her- he was about 4th I think, and I suppose they could see he had no number when he came back in again. A few people skidded to a stop as we shouted, but the official said they would get a time penalty (which I was relieved about- I know it isn’t down to me but I felt a bit responsible)- but on guy didn’t stop at the line and sort of skidded to a stop in the road, as a car was coming- it was not safe at all and the official said he would be disqualified. What a silly mistake to make, as I don’t think he would have found out until after finishing all three disciplines.

Anyway, after the final cyclists left, we could leave our position. I took down some sign for the car park (I say some, because when I was going home I noticed a few more further away) and then headed over to the run finish line. A lady from the club was there, with her daughters, giving out medals, removing the timer chip (they have fancy ankle straps for them), hanging out medals, water bottles  and bananas, so I joined in with them, although I mostly just clapped in the runners. 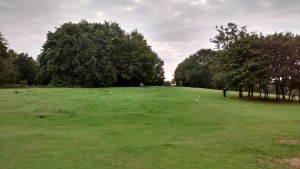 Hard to see, but they had to run around this field and it is fairly hilly- I did not envy them running that course especially after the swim and bike ride!

It was a bit strange because people were finishing in dribs and drabs- I suppose with a running event, everyone starts at the same time so you tend to get a steady stream at the end. But here, by the time they even started the run they were very spread out, so we seemed to have long amounts of time with no-one finishing at all. It gave us time to organise the medals on the table (and they were nice medals too- I didn’t take a photo but they were chunky landscape rectangles, with 3 stars containing engraved symbols- a swimmer, a cyclist and a runner, and the event name. A nice thick ribbon too.

One runner, when he was offered a banana, took it and then asked “do you have any nectarines?”- a slightly random request. I have never seen nectarines at a race!

They presented the winners of the shorter distance with medals- one lady (who I think won the 60-65 category) was so chuffed to have won!

When some people finished they looked so fresh (especially the winners- they didn’t have red faces at all!) but some people really looked like they were about to collapse and it was quite alarming- there was an ambulance right by us and luckily it wasn’t needed. I am not surprised because it is tough, but it was still worrying to see. Lots of them were very polite to- a few even came back to thank us, and one guy came back and asked us to pass on that the event was really well organised, which was always nice to hear.

At one point a guy came to ask for some water- he was doing it as part of a relay (and as he put it, had drawn the short straw) so didn’t actually get to the finish for the goodies. Later, the one who cycled joined him, and they cheered in their runner- a team seemed a good way to go.

When the final runners were coming in, they presented medals to the winners of the longer distance, plus the club trophy (a massive cup)- a fairly local club (Hoddeston Tri) won it- they had a huge group of people and seemed quite a competitive, serious (and very male dominated) club.

There were loads of spare t-shirts, so all the marshals were asked to take one home (at least- I ended up taking some for my dad and brother too, as they can wear them cycling). They are nice technical tops, and I even managed to find a small.

That is sort of what the medal looked like too, with the symbols on the stars.

Before I left, I had one more job to do. All the competitors had an envelope with their chip, strap, map, swimming cap and t-shirt. Lots of people (I would guess around 30) hadn’t turned up, so I had to go through the envelopes and take out the chips and straps (apparently the race is charged £25 for each chip not returned)- while I was going through the envelopes I picked up a lot of the swimming hats – I will take them into school and so if children forget their hat for their swimming lessons they can have one of these- it seemed a shame to let them go to waste. 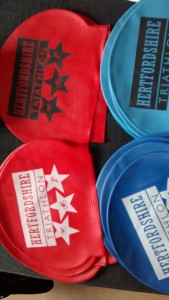 My pile of swimming hats!

By this time it was nearly 12- I had been up since 6 and not even had breakfast- I had packed a cereal bar but had not really had time to have it. I was ready for lunch when I got home, but I suppose not quite as tired as if I had actually competed in it!

I did enjoy it, but I must say it does not make me ever want to “tri” one (see what I did??). If you could be in a team, which part of a triathlon would you choose?

8 thoughts on “Do you have any nectarines?”