Last year after reading lots of reviews, I bought myself a Garmin vivofit. Then in the summer I was sent a fitbit, so I have mostly been wearing both of them each day. I thought it would be good to have a comparison.

First up, the Garmin. 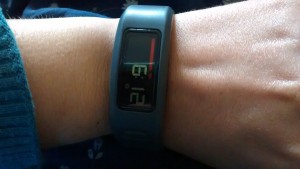 That little red line is a hint that I have been sat down for too long!

Easy to wear (watch strap). (I did read reviews of the strap coming off, but this has never happened to me and as the strap clips in, I can’t really see how this has happened).

Fairly accurate with steps and miles (I have compared the distance after a morning run, eg parkrun, and it’s very close to my actual Garmin).

Uses the Garmin software/ website (which I already use with my GPS watch).

You can earn vouchers via Bounts.it

You can choose the display- time/ steps/ steps to goal/ miles/ calories, and easily flip between them.

The red line appears as you are inactive, and gets longer the more you stay still. I didn’t want a buzz or a flash or anything.

The app (you upload via bluetooth) seems to keep crashing, and I have had to re-install it several times on my phone

I can’t see how to change the time, so when travelling I had to put my phone on wifi, then bluetooth, then synch it, and then the time would change. This was all OK until I didn’t have free wifi, and then I could not do it- annoying when I use it as my watch. 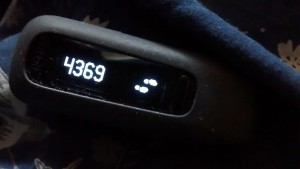 They sponsor parkrun! Hooray! And somehow if you have a parkrun barcode you can get a discount.

Connects via a little USB thing in the laptop, does this automatically so no need to remember to upload.

You get a weekly email with your steps- this is interesting to look at and easier than logging on to the website.

Annoying to wear- you can clip it to your waistband, but I found it kept popping off when I went to the toilet. I tend to wear it in my pocket, but I don’t always have a pocket so sometimes have to clip it in my bra.

Not such an accurate step count (generally says more steps than Garmin).

It sends you personal messages on the screen (“You rock Maria/ Let’s go Maria/ Climb it Maria”-Climb what fitbit??  I find them annoying but I think they are meant to be cutesy).

Battery life is rubbish! One week! You get sent an email when it is about to run out, but sometimes I don’t see this until the evening, and it’s run out in the day.

You can’t wear it while it’s charging so you miss out on steps!

No constant display (which means the battery life baffles me even more)- you have to press a button and it then shows a picture (mine is of a flower), time, steps, floors (this is a very weird feature), miles, calories. You can’t leave it on one, and have to flick through (and endure more “motivational” messages) each time.

It doesn’t have an incentive on the screen- for example it doesn’t tell me when I reach my daily goal. I don’t mind this too much, but seeing as it is meant to promote being active, a + symbol or something would be good to show that you are now working beyond the goal.

No idea how to change the time. While away I plugged it into Andy’s computer, but that didn’t change it at all.

No reminder when you are inactive for a time. Sometimes if it is still, and then you move it, a “motivational” message appears, but nothing to say how close to your goal you are, or how long you have been inactive for.

So, as you can probably tell, I much prefer the Garmin, but I really like fitbit as a company (especially as they support parkrun). What would you look for in a tracker? Do you have anything to add to any of these lists?

*I bought the Garmin one myself. I was sent with fitbit in exchange for a post about Fitness First (which I published a while ago) with no request to review it. All opinions are my own.

14 thoughts on “Garmin vivofit versus Fitbit”