So, back in the summer someone in my running club mentioned that she was the ambassador for a virtual 10K race, as it was raising money for a charity close to her heart (SANDS- Stillbirth and Neonatal death charity). So I popped over to the website (here if you are interested, it might be my new addiction), and as well as signing up for a September 10K, I signed up for a Summer 5K- look at the gorgeous medal! How could I resist that? 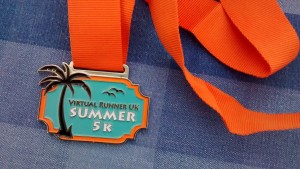 So, I had to do the 10K in September, and I had pencilled in last weekend (would rather not do one after work, and had the wedding the next weekend, and a family do the weekend after). On the Bank Holiday Monday I had a lovely 6 mile run on a new route, so I decided I would race myself on that route. I had to add a bit to it, as I needed to make it up to the 6.2 miles for an official 10K, but that was easy as near the start I just turned right, left, left, instead of going straight on.

So anyway, Sunday morning I set my alarm for 7.30, and was out the door at 8. I even did a few minutes of dynamic warm ups. Sort of like a race warm up.

The weather was pretty good- sunny at times, overcast at others, but cool, not too windy, no rain. Just good running weather. I had looked on Strava briefly before I left, to see the time I needed to beat, but because they take out the not-moving time, I wasn’t quite sure of my total time. In the end I aimed for better average pace, as last time it was 10.19 per mile.

I was enjoying listening to marathon talk (slowly catching up still), and amazingly I didn’t have to stop once for traffic when crossing roads. 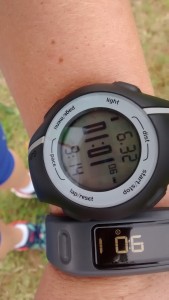 I passed a few OH ladies and called “morning” to them, but other than that I saw hardly anyone. When I got home it turned out I had run 6.3 miles (but then normally in a race I would loop about the route a bit when passing people)- 1:01:06 (Strava says 04, which must be the stop before I pressed stop). 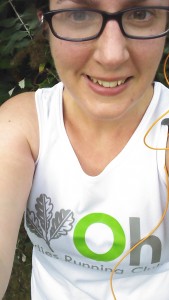 As soon as I stopped my glasses started misting up- not sure why but it always happens in the winter (and here I was outside, not even going inside in the warm).

I sent the picture of my Garmin off (via email) and then they sent the medal out. I was in the results table online the next day- it’s all very speedy. 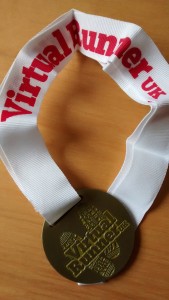 My medal arrived about a week later. And yes, I wore it for a bit, because, well, why not? It came with a note saying they had raised £600 for charity which I think is fantastic too. 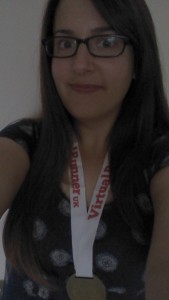 A bonus- a medal photo without the sweaty hair of after a race!

After a shower and a little muesli (I am learning that I must eat soon after I finish a run to combat headaches), it was time to head out as we were going out for lunch/brunch with Andy’s parents. We had a lovely wander around the town before settling on Bill’s, and as it was the weekend they were still serving brunch- pancakes for me, hooray!

Then we went to the new independent cinema, to see The Man from UNCLE, which, despite never seeing the TV show, I really enjoyed. It was sort of like a Bond film, but with less cliches. I’ve only been there once before, to see a Studio Ghibli film, and that time we sat upstairs which is just nice comfy normal seats. This time we sat downstairs- we had 4 big comfy wheelie chairs, and a little table- the chairs could spin around so in the adverts we could chat (whisper), and in the film we could spin around and face the right way. It was so much nicer than our local multiplex.

After a walk back to the car, we went back for tea and cake. I had baked a batterburg the day before, adding some ground pistachios to one part of the mixture to make it green. 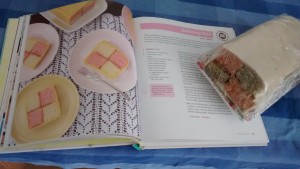 Would you be tempted by a virtual race? I don’t think I could run as fast as I do in a race, and you don’t get the medal right after, but honestly some of the medals are so pretty. They have a Christmas series of 5k’s and one of the medals is a reindeer! So, yes, I might have signed up…