I am a bit of a cereal bar addict. There are plenty of bars that I love- nakd bars, pulsin bars, clif bars, bounce bars; I find them perfect for leaving in my bag for a few days until I need a snack (much better than leaving a banana in there to turn brown and squashy). While I was away, Predator Nutrition offered me the chance to review some Quest bars, and because of my love of cereal bars, I agreed. 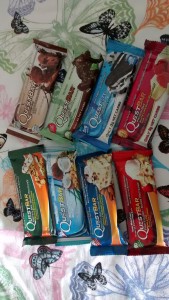 They sent me a big selection of flavours!

Quest bars are protein bars (around 20g per bar), that are high in fibre (17g in some bars) and low in sugar (1g in some). They use whey protein, so they are not suitable for vegans. The flavours all sound very tempting- Mint Chocolate Chunk, White Chocolate Raspberry, Peanut Butter Supreme, Apple Pie.

My first impressions were not too good- to me the packaging is really cluttered and it was not easy to see which flavour each one was. Plus the photos of the dessert that the bar was trying to imitate seemed a bit strange- seeing a photo of apple pie with a big scoop of ice cream on it seemed a bit misleading, plus it made me want a proper dessert even more! But that may be just me! 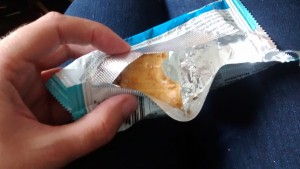 I packed a Coconut Cashew one when I marshaled at the triathlon, but was so busy I didn’t have the time to try it. Afterwards I had to pop to town to collect an order, so I had some of the bar on my walk back to the car, but I have to say I wasn’t keen. I was really hungry by this point (it was gone 11, and I had been up since before 6 and eaten nothing) so that didn’t help. But it seemed way too chewy, and had a weird metallic tang. When I checked the ingredients I noticed stevia on there, which in the past I have not got on with. But, some of the bars didn’t contain it, so I decided to try one of those next. 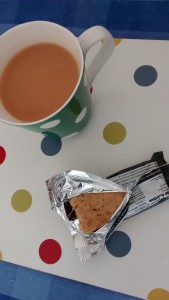 Next I tried a Peanut Butter Supreme- this one had no stevia, and I did prefer the taste, but I can’t say I really enjoyed it. The texture was still so chewy and to me it didn’t taste that much like peanut butter. The Vanilla Almond Crunch had no stevia, and the shortest ingredients list, but again, not for me.

Then, I tried an Apple Pie bar as it didn’t contain stevia- it smelled of cinnamon, which I loved, but the taste was just not for me.  I can’t pinpoint it, but they seem to taste too sweet, even though they are low in sugar.

The White Chocolate Raspberry had huge chunks of white chocolate, and freeze dried raspberries, but something in the bar seemed to overpower those flavours.

Finally I tried the Mint Chocolate Chunk, hoping that the mint flavour would overpower the artifical flavour that I kept tasting. The peppermint flavour was good, it had chunks of chocolate cookie or something in there, but I was disappointed as I didn’t like this one either.

I appreciate having the chance to try these, but they are not for me. I am not sure if it is the whey protein (when I tried that before, years ago, I didn’t get on with it), the artificial sweeteners (or I suppose sugar-free sweeteners, as stevia is a leaf so I suppose is “natural”), or the added fibre, but the combination is not for me. I think I will stick to my tried and tested favourite ones, and eat some actual mint chocolate if I want some.

Are you a fan of Quest bars?

* I was sent the bars in exchange for a review. All opinions are my own.

PS- If you like them, Predator Nutrition have some good deals, including some short dated stock for a reduced price.

11 thoughts on “Quest bars- a review”