I’ve been in my running club for over a year now, and last Saturday was their annual awards evening. Last year I could not go, but I was looking forward to it this year, although on Saturday I missed parkrun as I didn’t feel well and kept feeling dizzy, so I nearly didn’t go. It was dinner and a disco, plus a raffle organised by some people running the London marathon, and the awards. Earlier in the week they had sent out the list of nominees for the different categories, although they didn’t announce the the fastest 5k, 10k and half marathon times (but I knew I would not win any of those, although I might have been close for the 10k). One of my work friends told me I might win something, and I told her that no, I was not nominated, and anyway if I was I would be so nervous- I was glad I could just turn up and enjoy.

It was all set out beautifully, and the meal was good (as well as accommodating the vegetarians, they also gave me a separate dessert as I didn’t want the Baileys that was in the profiteroles!). It was so funny seeing everyone dressed up- sometimes it was hard to recognise people as usually we have our hair scraped back and we are all in leggings and high viz! After dinner they started announcing the winners. Last year they let everyone vote, but now the club is bigger they said not everyone knows everyone else, so the committee had chosen. Different run leaders were coming up to announce each winner, and it was very exciting to see who had won. One of the ladies I run with a lot won Most Improved- she had only began running earlier in the year and has been steadily increasing her distance (she did the 10 mile race last weekend) so that was great to see.

There was a bit of friendly competition (banter) over the fastest 10k and 5k times, as there are a couple of very speedy ladies. Each award was given out by a different run leader. They then went to the final award- Runner of the Year. The girl next to me was announced as the runner up, as she had joined less than a year ago and had run 100 miles in the summer (impressive especially as she has 3 children)- she was over the moon and it was so lovely.

Then our club leader started talking about the winner- she started talking about someone who represented the club at different races, and encouraged others, and then the run leader I run with came up to hand it out, and I was looking across the room to see who it would be, and they called out my name! I was so shocked, and proud. As I went to collect it my legs were shaking! I really get so overwhelmed. All the others had collected theirs, had a photo, and gone to sit down again, but someone called out “speech”- I think I looked terrified as someone said to me “you don’t have to”, but then I felt like I should say a few words because I didn’t want to seem ungrateful. I said something about how I loved running before I joined the club, but since joining it I have loved the support and encouragement of the club, and seeing how everyone else does too. 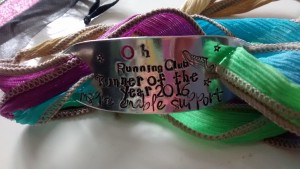 As well as the lovely trophy thing (which had my name already engraved!) I was given a lovely shoe tag, which I am wearing as a bracelet as it’s too nice to get muddy. I love it.

Here are all the winners! (We had to pose in the hall as it had better lighting!). I still can’t quite believe it. I have never had a trophy before, having ever being in a sports team at school or anything. 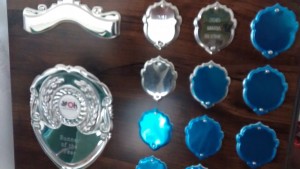 Now I need to find a place to display it. I actually found it hard to get to sleep when I got home because I was just so surprised by it all. It’s weird in a way being given an award for basically doing a lot of something that I enjoy, but it’ lovely too.