Last Saturday it was graduation day for some of our new runners- doing their first 5k. It also coincided with another local running club doing the same thing. As it fell the day  before the Welwyn half, I had already offered to marshall as I didn’t think running before would be the best idea- I can get a bit carried away.

Here is what happened in the style of The Smartest Giant in Town:

I confused a dog with my hat like a frog.

I used a stick to give dog poo a flick.

I chatted with my friend as people ran around the bend.

I gave a cheer each time a runner came near.

But look me up and down, I’m the happiest marshal in town. 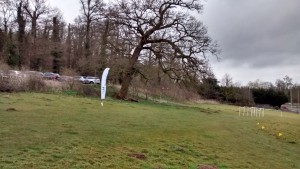 That’s our OH ladies flag next to the finish line.

After finding out my marshal spot (at the 4km mark) I left my dad in the car and walked down the hill just as the runners were setting off. It was colder than I thought, and was glad I had packed my Kermit hat. I had my OH hoodie on but actually needed my coat as I was in the shade too. 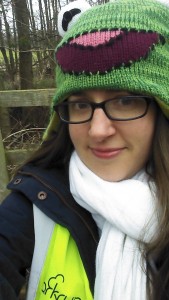 As I walked down I passed a lady walking two dogs. One of them stopped in it’s tracks and stared at me- it looked so confused- “I think it’s your hat” she told me- probably the eyes!

Once in my spot I noticed a huge pile of dog mess right in the middle of the path. No runner wants to tread (or worse, slip) on that as they come around the bend, so I got a big stick and managed to flick it (in many goes) away to the bushes. As I was doing this a guy ran past and asked me if I really was flicking poo. Yes, I replied- the glamorous life of a marshal!

I waited for a bit and soon one of my club mates came down (Louise who I ran with on Sunday)- she had helped with the pre-event set up, and her daughter was running. She wanted to try and take some photos of the graduating runners. We had a chat and cheered on runners as they went past. It’s a good spot as although you are there a long time, you get to be the one delivering the good news- less than 1 km to go, the finish line will soon be in sight. I did enjoy it although my voice was very hoarse when I finished! 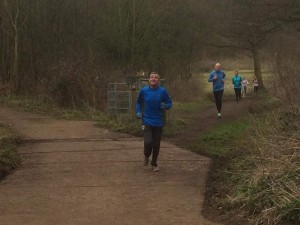 My dad laughed as he ran past as he hadn’t seen my hat before! We saw all the OH ladies and gave them a huge cheer- they were doing brilliantly- then Louise headed back to the finish.

Once the tail runner headed past, I started walking back up and could see the ladies at the top of the field having a chat. I had said I would see Dad in the car but he ended up running up from another field- there’s a bit for bird watching so he had walked down there, with a plan of finding me and walking back up with me, but the tail runner went by without him noticing so he missed the end!

(This was at the start- but they were all smiling at the end too!)

I do love marshalling- of course I love running it, but cheering on everyone else is good fun too and I love seeing the speedy front runners. It also surprises me every time just how many runners say thank you as they run past. I always try to, but it isn’t always easy. One child thanked both me and Kermit! The marshals even got a special mention in the run report as apparently lots of runners commented on the support and encouragement from the volunteers. Hopefully lots of them will be back! I do think that if it had been around when I started running it would have been far less stressful and intimidating than an actual race for your first 5K event, and I hope that it encourages more people to keep up with running  (or walking).

The rest of Saturday was spent having hot cross buns for breakfast, visiting my parents, going to the garden centre for supplies and digging up some plants to attempt to take them with us when we move.

It was fab- and that’s why parkrun is great- time outdoors, being active, being involved in a community- it’s not really even that much about the running.