So last week I was still a bit stiff, and paranoid about making my back/hip worse, so I offered to help out at parkrun so that I could not change my mind in the morning and run. Their roster was full, but I offered to take photos so they added me to the list, and Andy lent me his fancy camera. 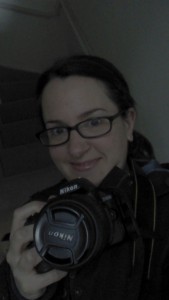 This was very hard to take with my phone in one hand and big camera in the other!

My dad was running so he picked me up and I had a little chat with some of the team before heading to the first spot. Panshanger is one big loop and last time I marshalled on the first point, I was back at the start before the first runner finished, so I thought that starting there would be good, and then once the tail runner went past I could walk back to the finish and get more photos of runners finishing.

The bluebells were looking gorgeous, and I took a few pictures of them too. I was trying to cheer runners as they headed past, and I spotted a few people I knew, but it was hard to squint through the viewfinder the whole time. I tried to track runners (that red top is at the back of the picture, wait ’til he is at the front then take another) but it didn’t always work. It was fairly gloomy and the flash kept going off so sometimes it needed to charge between pictures too.

Some of our club were running (and having training afterwards to process the results ahead of the new parkrun in May) and I managed to give them a cheer on their way past.

One local club (Ware Joggers) were holding a pacing event, but I had forgotten that and kept wondering if there was a virtual race going on as I saw a few of them running past with  numbers on their tops, and only realised after that they all had those plastic yellow vest things over their tops.

One of the pacers in the yellow vest.

After the tail runner went past, I took my time walking back, taking more pictures of the bluebells and scenery.

I love this view- the snake of runners heading up the hill and along the top.

The same club were also giving out free cake to promote their races (you can look at the races here. The Ware 10 miler is one of my favourite races, and even though it’s now in the summer instead of the autumn I am still signed up as it’s a very pretty route, their marshals are fab, and they have tea and cake for £1 at the end and it is always so good).

By the time I got back to the start the fastest runners had already finished, so I walked down the hill to take pictures of people in their final stretch.

I tried to show how steep that hill is, but it never comes out well in photos! At the end of a fast parkrun, it is tough!

Even from the bottom of the hill pointing up! That’s my dad in the blue, heading up the hill.

I saw one of my friends from our club at this point, and it surprised me as I didn’t notice her at the start- however when I looked back through the photos I did snap one of her!

My dad walked down to me once his chip was scanned, and we cheered on some of the runners, but it was getting a bit cold so we walked back up to the finish and I took my final few.

I got an action shot of someone going through the finish funnel!

The coffee van was still doing a great trade, to go with the free cake of course! Although I didn’t have any as we have Andy’s birthday cake at home which will last us a while!

I really enjoyed taking pictures though- it was hard to cheer as I had to keep still when taking the pictures, but when I have been to other parkruns it’s always nice to see a photo (especially if I have both feet off the ground!) so hopefully some of the runners will have a look through and find a good picture. It was so cold though! I wished I had brought gloves with me. This weather is madness! Last year I did so many of my long runs in a vest, whereas this year I have only braved a t-shirt a handful of times.

I was cautious about getting stiff, and I had booked a haircut for the afternoon, so I parked further away so I had a good mile walk each way, and we had a walk (which was freezing!) before dinner.

On Sunday I had a very slow run around the fields- I got a bit lost at one point so it ended up being 5 miles, but 5 enjoyable miles, and all was fine. In the afternoon we had a nice walk through a park in Hemel after popping in to see Andy’s brother. 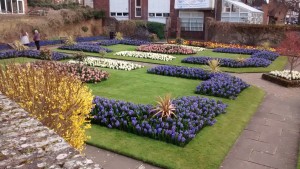 I had a rest day on Monday (a couple of walks), and then a club run on Tuesday. I had picked up something heavy at work and my back was feeling a little bit stiff, so I was a bit worried during the run that I would have to stop and walk back, but it was fine and I was glad to get out there. Lots of stretching when I got home. A rest day on Wednesday (a walk after work), and a run on my own on Thursday (4 miles), another rest day on Friday, and then parkrun this morning. It seems to be OK- I have been using the reusable ice packs after a run too, which does seem to help.

Do you ever buy photos of you at running events? I have never bought a picture as they are so expensive, plus they tend to be awful pictures! I think I might have been tempted to buy one of the Brighton marathon, but Andy took some good ones so I didn’t feel the need to look at them.