This is a rewind to last weekend! Our club had hired out the local track (at 8am on a Sunday), and then we were heading to brunch afterwards in case anyone needed more of an incentive!

It was such a hot morning, and of course there is no shade around the track, so our leader decided to ease off on us a bit.

Pictures from our facebook page- look at the concentration!

We did plenty of warming up- a jog around the track, lots of kicks, jumps, lunges and other things (very technical terms here).

Then we did a version of what we had learnt before-  a 3-2-1 session where you run at 10k pace for 3 minutes, 5k pace for 2, and then as fast as you can for 1, with breaks in between. We only managed this a couple of times before it was time to cool down, stretch (including laying on the track!) and head out to brunch.

It was really good fun! Hopefully our club are going to have a more regular session (they mentioned once a month) which would be great as we do sometimes do interval style training, but it’s much easier on a track than on uneven pavements where you have to dodge people and dogs and things too.

We had booked at Bill’s (the same as our festive run and brunch) and it was lovely to have a chat- some of the ladies had run the London marathon so it was good to hear their tales (mostly- as someone who avoids public toilets at all costs I did not like the sound of the she-wee things in the starter pens…). It was so warm I went for a juice instead of my regular breakfast staple of tea, and had the most delicious French toast with a chocolate peanut butter sauce, fruit and a berry sauce- it was so good.

Although I turned my Garmin off, it seemed to keep tracking where I was, as it tracked my drive into town, and then my drive home- more records I shall never beat…. 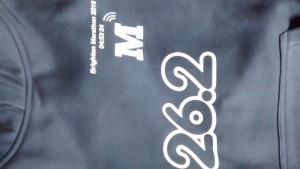 Also, look what arrived earlier in the week! A marathon talk hoodie! It has my Brighton time on it from last year- I really wanted a Brighton marathon hoodie but I didn’t want to buy one before, just in case it was bad luck. Then they stopped selling them on-line, so decided to get my MT one personalised. I love it! Although it is very huge- I emailed them as there was no size guide on the Xempo website, and they thought a small would be OK, but it is very large and I think if I were to get another one, I would try the XS. Better to be too big than too small though. 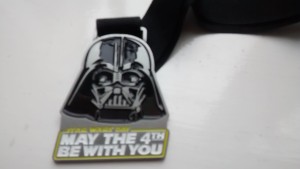 And this came too! I had signed the two of us up for the May the Fourth virtual run, as Andy is a big Star Wars fan- it was a couple of days after the Cakeathon so I didn’t run very fast, but it’s the doing it that counts. Good old Virtual Runner UK!

Are you a fan of track sessions? What is your ideal brunch food (and drink)?

6 thoughts on “Track session round 2”