Are a bit of a tiring combination!

This weekend was the inaugural Ellenbrook Fields parkrun (look it up if you are in Hertfordshire)- our running club had a lot to do with setting it up, particularly our super coach Carrie. A lot of our club were going to be there, whereas often there are only a few of us at parkrun each week. It was novel for me because the start is jut over a mile away, so I could run there instead of driving. I got up a bit later, pottered about and then jogged up to the start. I wore my hat because it had been raining, but I didn’t need it in the end. There were loads of people swarming towards the start- I knew it would be busy as word seems to spread quickly through our running community- there are lots of running clubs nearby, and plenty of towns with clubs but no parkruns (Welwyn, Ware, Harpenden to name a few), plus they had mentioned it a lot of times at Panshanger as the Panshanger team had mentored the Ellenbrook team and been involved in helping with the start up too. 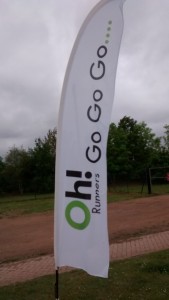 Our club had a banner out near the start. We love a bit of extra support.

I was there at about 10 to in the end, so had a quick chat with a few of the marshals and runners from our club, before Carrie did a super welcome speech from a fence (as it’s so flat there- no nice hill for her to stand on).

Then we were off! I realised right away I had started a bit too far back, but I wasn’t going for any pb (of course the first official one would be my pb for that parkrun)- I quite liked the idea of beating my time from last week but as I had already run up (and used my Garmin) I could not really work that out. Anyway, the course starts with a little loop (around a km I think), and so during that I took my time overtaking a few people at a time. It was so lovely because I knew most of the marshals (by name too, not just by sight) and so they were cheering all of the OH runners on by name too. I saw a few OH runners up ahead so ran to catch up, and the after chatting for a bit heard someone else call my name- it was someone I used to run at Sweatshop with- I don’t think we had seen each other for over a year, so it was good to have a little chat. Once the first little loop is done, you do the first part of it again before carrying on in a much larger loop.  By then it had thinned out and so I could focus on where was best to run (the ground is a bit uneven). I may be biased but the best marshal (the lovely Donna, my run leader) was yelling at the top of her lungs at around the half way point. Her opinion (which I agree with)- no point being a marshal unless you’re going to encourage people on. She certainly did! 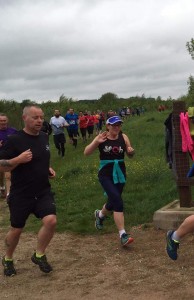 Nearly both feet off the ground I think!

Then it was through the cow field, and along a very rutted bit of grass, where I caught up with someone I know a bit through the facebook DRYT (Did You Run Today?) group, and Strava, so we said a quick “hello”. Then (passing two more lovely OH marshals) it was onto the old taxiway (Ellenbrook fields used to be an old airfield) to the finish. I ended up running next to a guy who chatted to me for a bit, and then up ahead I could see a few more OH runners (one of them is a very fast runner so I did wonder about my time at that point) so I decided to try and speed up a bit to catch them. I could not quite manage it, and crossed the line 2 seconds behind one of them (and 10 seconds behind the speedy one) with a time of 27.52. I am rather pleased with that- I have only run quicker than that once this year (my pb at Panshanger) and because of the crowds at the start I wasn’t pushing it as much as I could. 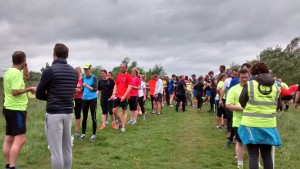 Look at the huge queues for scanning! There ended up being 273 runners, not too shabby for the first event. The tail runner came in at 41 minutes too, so a very speedy one (I think I have been around 55 minutes for my tail running).

I stayed around until the end, chatting to people from my club, and cheering in the other runners. One person gave the RD feedback about there not being any km markers (I had wondered but I also thought perhaps they were there and I didn’t notice them- Carrie said that they didn’t get any as they are not included, but they are in talks with the owners of the land to have permanent ones- I think I have seen pictures from a few National Trust ones which have them, and I think it’s a fab idea. When I decided to head home (packing loomed) I passed Neil and Eleanor Draper (they are from Garden City Runners and I often see them at Panshanger- they were interviewed on marathon talk before – lovely and inspirational people)- so I asked them how they had found it they had really enjoyed the route which was good to hear. It’s strange as since running around those fields with Sweatshop it’s one of my favourite summer running places, but I suppose lots of people still don’t know about it.

Also, I love looking at the results, and it was great to see that it was parkrun number 1 for so many people- hopefully one of many! That was my 8th different parkrun venue (70th run)- I heard someone say that once you have been to 20 different ones you count as a parkrun tourist! A few more to go then! Although there is one at Stevenage starting next weekend, but I don’t think I’ll be able to get up there until July as I am either away or volunteering at St Albans, Panshanger and Ellenbrook. Busy times ahead!

So, onto the packing. We’re moving house on Tuesday this week, and some boxes were delivered on Friday so that was basically our weekend planned for us! We had packed up a few boxes before, but had soon run out of space to store the packed boxes. Yesterday I parked my car outside so we have spent the day packing, and putting the boxes into the garage (I normally keep my car in the garage). We had to pop out to get a few bits of food for the next couple of days, and I bought us a cinnamon swirl from Starbucks to share as an afternoon treat after a lot of packing. This was very much needed- perhaps running 5 miles was not the best preparation. Mary’s page about moving has been very useful and I’ve been writing all the boxes down in a note book (although we are getting a company to actually move the things), and we are now up to box number 40. How do we have this much stuff? And where did it all fit? I’ve also been trying to do things like change my address for a few places- we have signed up to the Royal Mail re-direction as I am sure things will slip through the net.

14 thoughts on “Packing and parkrunning”