Last weekend we were off to Manchester. We had originally looked at driving up most of the way on Friday, and then doing some parkrun tourism before driving the rest of the way, but we could not find anywhere suitable (eg a parkrun close by to a hotel) on the way, and didn’t really fancy that drive, so we booked train tickets instead.

It meant I headed to Panshanger parkrun- now it’s very local to me and took me 6 minutes to drive there! I think it’s about 5 miles away so potentially I could run one way (and get a lift back if my dad is going) but the only way I know is on dual carriageways with no pavements, so I need to look into that. Anyway, I was still aching after body pump, so I started at the back, although this ended up being very stop-start as it’s very narrow. I enjoyed it though. 31.20 (my 72nd one).

Then it was a bit of a rush to get showered, finish packing and drive to the train station (Milton Keynes)- we stopped on the way to get some lunch for the train. We had a bit of a panic in the car park, as it was pay and display (honestly, what a stupid idea for a train car park- what if the train is delayed…), and the machine would only do one day tickets, not the weekend rates as advertised. I tried to call them but got no answer, and I didn’t want to miss our train so I took photos of the signs and then rushed to the platform. (I called them later and they were not worried and said we could buy a new ticket online after midnight).

Anyway, the train journey was lovely- we had seats in the quiet carriage so we listened to the film podcast and looked out of the window.

After checking in to our hotel (this took about 30 minutes- Disney has shorter queues!) we headed out for a little wander and to find some dinner- in the end we went to Northern Soul for an epic grilled cheese sandwich- they are so massive we easily could have shared.

Then we walked out to the city stadium to see The Stone Roses. 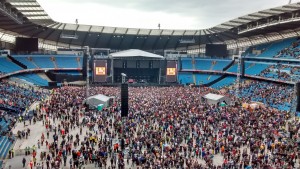 First up were Public Enemy, which was just very confusing- a lot of shouting the names of people in the group- I don’t think Flava Flave even knew what day let alone what time it was (and yes, he still had his massive clock on). 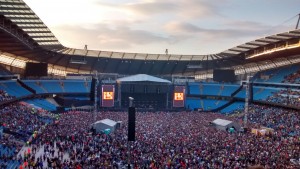 It was lovely as the sun was going down – a bit like a festival. 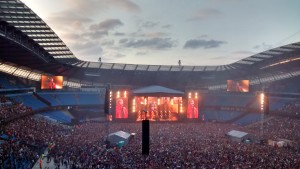 Then the main event- they were awesome although there were lots of idiots in the crowd letting off flares the whole time. Ian Brown even had a go at some of them- they are really dangerous, but people still kept doing it. It was so weird though as so many people were getting up and going to get more drinks the whole time- seeing drunk people try to negotiate steps carrying four pints was amusing at first, and then got annoying as I was right by the steps so kept having to move so I would not get soaked. Plus even though they claimed it was a non-smoking venue (even electronic ones) but so many people were blatantly ignoring it. We saw one person told to stop, even though the same marshal was watching the whole time. Anyway, the band were great- my ears were ringing after.

We walked back to the centre as the trams were totally rammed.

The next morning we went to Bill’s for breakfast- I was very sad to see they don’t do the peanut butter French toast any more, but they still did the pancakes and they were super. 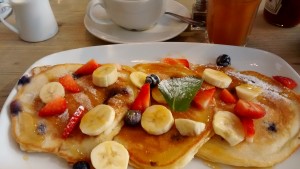 We then checked out of our hotel and had a few hours wandering around the shops before getting the train home- another good journey with podcast listening.

Do you like train journeys? It is so much easier than driving, plus you get right to the city centre.

4 thoughts on “Heading up to Manchester”