But first up, my last week of running:

Last Tuesday (after decorating all morning and having friends over in the afternoon) I headed off for our club run. We were due to do the 8 mile hilly loop- it’s a really pretty loop after the first couple of miles, but it’s hilly. There were only 5 of us on the run, and two of them wanted to run with us for the first two miles, and the run back, so for the most part it was three of us. It was very enjoyable, but it was so muggy, and drizzling, which just made it feel more sticky instead of being refreshing.

On Wednesday I was seeing friends in the morning for brunch- I walked into town to meet them, we had brunch (good old pancakes at Bill’s). 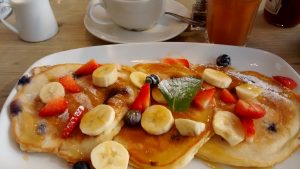 Then we walked back home, and then when they left I walked back into town with them before they caught the train. I did consider a run, but we went shed shopping instead and after walking close to 5 miles I decided that it was a good idea to have a rest day.

On Thursday I had been decorating all morning, until around 1.30. Some friends were due to pop by, but could not make it in the end, so I had some cereal, pottered about for a bit while it went down, and then headed out on a run. I got into a good routine a while back of having some hill repeats in my training each week, but since moving I need to find a good hill. 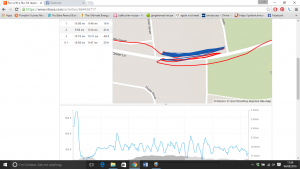 I did around a mile of warm up, then found a small-ish hill, and went up and down it about 12 times I think. I like the Strava screenshot as it looks like someone just scribbled on the road! After that I had a gentle run home, to total 3.1 miles.

On Friday I ran to the lakes, around the lakes and back home. It was lovely. 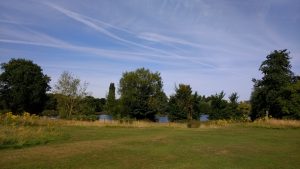 Then on Saturday it was time for parkrun! For the last month I have either been a tail runner or a marshal, but as this was my last one before going on holiday I fancied running all out. I looked at my pb for that particular course, which was on the inaugural event- I ran 27.52, and when I used a pace calculator to see what a 27.40 time would be (for a bit of breathing room) it was 8-something per mile, so I thought I would just see how close I could get to it.

My dad and brother were both running, and my dad didn’t want to go too fast (his pb is around 22 minutes I think) so he ran with me. We started off more cautiously, and were enjoying saying thanks to all of the marshals- I knew nearly all of them! The Ellenbrook Fields course has a small loop of around a mile, and then a large loop, all around fields and through woods,  and we were really enjoying the scenery.  Dad does not run with a watch, but he guessed after 2 miles that we were running around 26 minute pace- I was not sure but I knew I was close to the pace I had looked at. As you get closer to the finish you run along a flat, straight concrete path (and old taxi-way from when it was an airfield) and we saw my brother up ahead. Dad suggested that we try to catch him up, and finish in a row, as we have not managed a 1,2,3 before. We gained on him for a bit, but then he started speeding up and overtook a couple of runners. Dad mentioned that we could still go for it, so I told him to overtake and that I would try to keep up with him.  At this time all I could really do was gasp an answer to Dad, but we managed to pick up and overtake the two runners, and then got closer to my brother. Dad ended up running behind me and cheering me along, which was lovely. As I went through the finish funnel, I did actually gag- I was very close to actually being sick and have never felt quite like that before- I have felt nauseous before, but never actually felt my throat go. It was not nice and I felt very sorry for the person handing out the tokens! I got my breath back quickly though, and we were very pleased to finish as numbers 51, 52 and 53! My watch said 27.17, so I was pretty sure that I had achieved a pb!

We had a few stretches in the shade, before walking back to the car and taking a photo to commemorate- we tried to do podium order (my brother in the centre as he finished first out of all of us) but could not remember which was bronze and silver are meant to be. 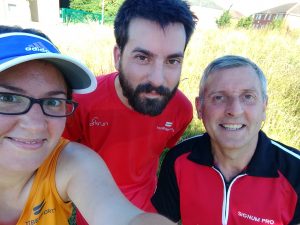 When the results came through I was really pleased to have achieved an official course pb of 27.16! My brother was 5 seconds ahead, and my dad one second behind. I was chatting to Dad on the way back and he mentioned he thought I was using my arms more, which I was really pleased with, as we practised this at the track session last week, and as we were coming down the runway I tried to really think about my movements.

As the result came in, I was looking on the Did You Run Today facebook group (a really welcoming and supportive running group) and someone had posted about being really disappointed because they did their first parkrun last week, and this week were a minute slower- not the right time to jump on there and post my pb! I think if you follow other runners, and read blogs, then there will always be someone getting a pb, but if you look at individuals they aren’t all getting them all of the time.

I looked at my full parkrun results to see how that time compared. It is faster than my tourism to flatter courses (including Hove Prom and Crissy Field), but I have beaten that time at the very flat St Albans back in 2013 five times, and matched it once.  Since mainly running Panshanger (off road and not at all flat) I have only run 27 minutes a handful of times. Anyway, I wondered how many pb’s I had achieved. That was my 75th parkrun, and I have a total of 8 pb’s- this does not include the first event at new courses, as that is always an automatic personal best. I didn’t think that was too bad a ratio, and I think it shows that you can’t be getting faster times every single week. My dad has run 66, and achieved 13 pb’s, so he is a bit ahead there. My brother has run 53 and achieved seven pb’s, again a bit ahead of me. Hopefully when the cooler weather comes around I can do a few more flat out parkruns and maybe chip a few seconds off- it would be good to get another one beginning with a 26, but we shall see! Of course the beauty of parkrun is that you can run it for any reason you want, and now I am half way to the next milestone (as my dad pointed out to me) I shall be working steadily towards 100.

How often do you think you achieve a pb? If you do run parkruns, how many in total have you run, and how many of those have been pb’s?