Our running club has links to a local yoga teacher, and for a while I have been looking at the times each week and thinking about going. This week, I decided to be brave and head along to it. 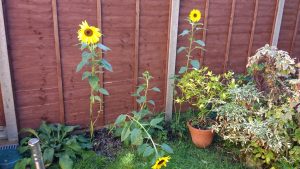 Sunflowers finally flowering- something relaxing to look at (even if one is very droopy!)

One friend had said she would meet me outside, but then messaged me as I was leaving saying that her husband was not yet back so she didn’t know if she would make it. It was too late for me to back out! I arrived early and sat in my car for a bit, I’m not sure why I was so nervous about it. As I was the first to arrive I chatted a bit to the instructor who really put me at ease. She asked about why I wanted to come, and whether I had done any yoga before (I did say I had copied some videos from the internet, but I am not sure if it really counts!).

Anyway, there was another new person who turned up, as well as some regulars, (including some children), another friend from the club, and my friend who managed to get there just as it was starting.

In my ignorance, I imagined we would spend the class lying on mats, relaxing. I have no idea why I thought that! I also wore trainers, not really thinking that we would have bare feet for the class. The instructor had mats and blocks, and after a gentle warm up we started the session, which this week focused on twists (she has a different focus each week).  It was tough (in a good way)- I had no idea I would sweat that much! We did a lot of abs work- laying on backs with legs in the air, lifting shoulders and twisting elbows across. We then did a lot of mini routines where we repeated sequences of moves (downward dog, kicking one leg out several times, going down into plank and then press up positions)- my arms were shaking by the end of that set! At one point we were doing some balances and new people were encouraged to go to the front so we could lean against the wall- I was very glad I was not the only new person there, although of course no-one was looking, they were all focusing on their own balances.

The instructor was lovely- she would come around and adjust you slightly, which of course you would never have if you were just watching it on the internet or doing it via an app.  All the way through she would show variations if you were struggling to do the poses shown, and even though I am very inflexible I didn’t feel self conscious about it.

Towards the end we had a very relaxing stretch and had to close our eyes- the instructor turned off the lights (she had candles on) and put some rose oil on our foreheads. This was the yoga I was expecting! I did find the more spiritual side of it a bit strange (after the warm up we did some “oms”- everyone sung the same note and that was a bit unexpected)

I ached so much the next day though- the same sort of aches I get after body pump. But I think the extra focus on flexibility will do me good so I will be heading back there again.

Are you  fan of yoga? Do you worry about trying new things or do you just go with the flow?