ON Friday night, after dinner, we got the train down to Brighton. Normally fairly easy, but we ended up sitting at City Thameslink station for 35 minutes because apparently the GPS didn’t match up to where the train was… so we then had to get off at Gatwick and get another train. Anyway- we arrived somewhat later than we had planned but at least only had a short walk down from the station to our hotel. 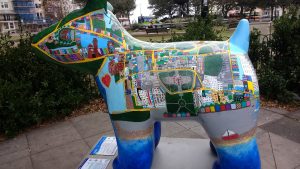 I was looking at the different Brighton parkruns and tempted to try a different one, but in the end I opted to go to Hove Prom again, thinking it was the closest option to my hotel. I went there last November, and it’s right along the seafront so I had no chance of getting lost on the way! It was windy, but at least not raining, and I enjoyed seeing some of the Snowdogs on my way (from the film- decorated by different artists to raise money for a local hospice). 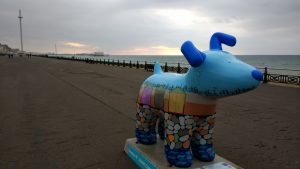 I arrived at around 8.45, and it was pretty empty- I thought perhaps the weather had put a lot of people off, but after the new runners briefing (I went to it as I could not 100% remember how many of each section to do) and then the main briefing, there were suddenly loads of people! There was a guy with an apricot top with “A-Z of parkruns” on the back- that’s a challenge! 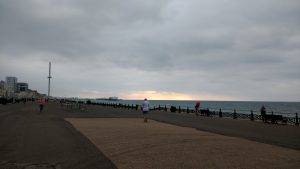 Not many people about at about 8.50am.

I noticed that Joe Wilkinson was hanging around (although I could not remember his surname- I texted Andy saying that the guy with the beard from Countdown and Him and Her was running)- I didn’t want to seem weird by asking for a photo or anything! It turned out he was running at a similar speed to me so I tried to keep him in sight- at one turn around point there were 11 people between us, but by the end there were only 3. I was hoping for under 30 minutes (I knew I should not be going too fast  as I had to run back to the hotel, walk around Brighton all day and of course, run 10 miles the next morning). My parkrun time was 28.11 (last year I did the same course in 27.39)so I was pleased with that. The marshals were brilliant, and the same as last year, as you run past the start/finish bit half way, they were calling out the times- I think they said to me 14.30, so I knew I was under 30 minutes at that point- I must have sped up slightly.

I didn’t hang about after getting my chip scanned as it was fairly cold- I ran back to the hotel (via a Pret to get us both a hot drink), before a quick shower and then heading out for breakfast. By the time I got back I had run 6 miles- the run to and from parkrun was further than I thought! 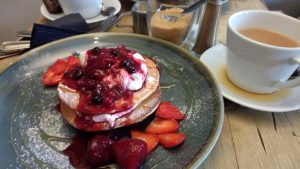 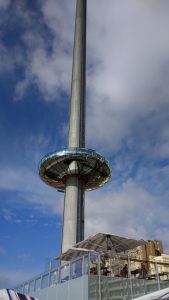 We spent the day walking around Brighton- back along the seafront to the beach huts in the morning, and then around the shops in the afternoon,  spotting more of the Snowdogs. 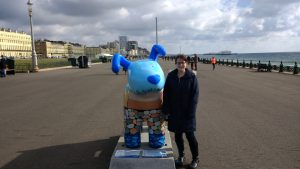 It poured with rain later in the afternoon, which mad me slightly dread the morning as the weather forecast was worse. We had a lovely dinner in Food for Friends, and then shared some lemon cake while watching The Fall (anyone else getting fed up with that now?). 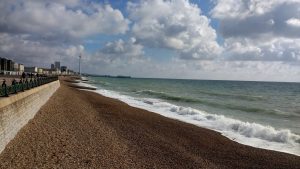 So, Sunday morning arrived. I had no idea of the weather as our hotel window looked out into an atrium. I had seen some messages from my club about people backing out of the Sunday morning run as the rain was so heavy, so I put on my tennis visor and left it as late as possible- to be precise I was out of the hotel at 8.38am, and it started at 9, just over a mile away. It was a speedy warm up run to get there on time! Thankfully it wasn’t raining, but the wind was gusting about in huge swirls, and the waves were crashing a long way up the beach.

At the start I lined up behind the 100 minute pacer, thinking that would be realistic. Last year I ran it in just under 1.34, but I knew I would not manage that this time. I took off my long sleeved top at the last possible minute, and dead on 9am the race started. It was so windy! The first few miles were OK, but sometimes as we ran past gaps between buildings, the gusts would be so fierce they would snatch your legs away from under you. It was really hard work, especially as the wind wasn’t constantly in one direction, it seemed to swirl about. I lost the pacer fairly quickly and on the hill at around 4 miles she overtook me. She was wearing a fluffy cow hat, and I spent a bit of time wondering if all the pacers had to wear those, and how sweaty they would be by the end. As there is a bit of out and back in the course, I also watched the speedier runners on the other side, and a few times saw some other pacers- they weren’t wearing fluffy cow hats, but maybe they were asked to and didn’t want to? Who knows. Anyway, going up the hill I started to notice a pain in my left buttock and left hamstring- it was a weird tense feeling. We turned around and ran back down the coast, and I tried to pick up some speed and keep the pacer in sight, but it was pretty uncomfortable. I think the bracing against the wind had made my muscles tense- it was a bit like cramp but not quite, but I did feel like I wasn’t running properly. After going down to sea level, we doubled back on ourselves again, towards the marina, and there was another little slope. Here I decided to walk and try to stretch out my leg a bit, which did help but it was still sore once I started running again.

When I saw the 7 mile sign I did think “less than a parkrun to go”, and I started to look out for Andy as he was going to meet me at the finish and bring me a cup of tea. I passed the 8 mile sign, and was occupying my mind looking at a lady in a bright orange top who kept running past me, getting about 100 yards up the road, then turning around and running backwards. She was clearly waiting for someone, but she kept on doing it over and over again- not sure why she wasn’t just running slower with her friend, as often I would not notice when I ran past her, I’d only realise when she overtook me for the umpteenth time! Anyway, at around 8.5 miles I saw Andy, who waved a cup and paper bag at me (containing a cinnamon roll I hoped)- I shouted that I only had a mile and a half left and I think the thought of the warm tea gave me a bit of a boost- plus I didn’t want it to get too cold! My final mile was 9.40, which was my second quickest (after the first mile at 9.37)- yes I really wanted the tea! I had lost sight of the 100 minute pacer at that point, so just tried to keep going, use my arms, and count up to 100 in my head to help the finish line get closer. The sea spray was blowing right across the finish line, so my glasses were suddenly all wet and as I was given my medal, water, a clif bar and some weird yoghurt drink, I had a hard time spotting Andy. 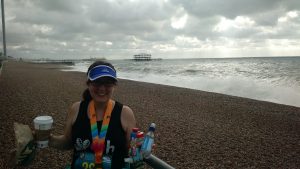 Luckily he had seen me (I didn’t have my phone with me so I  had just started to wonder about how we would meet up)- a quick photo by the sea and then I drank the tea while we walked back. 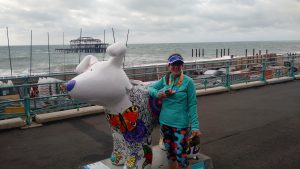 Then it was time for a lovely hot shower and the cinnamon roll before we walked to the station. We were going to go out for lunch, but as I’d just eaten the cinnamon roll I wasn’t that hungry, and there were rail replacement buses for the first bit of the journey, so we bought a sandwich, to have later on the train as we didn’t want to start the journey too late.

All in all, I still enjoyed the race. I think it’s well priced (it cost me £19 as I bought it on the earlybird deal), the hotel for 2 nights totalled £79 as we booked early, and our train tickets in total came to £40 as we have a two together card. The marshals were very encouraging in what can’t have been nice weather for standing about in, and the route being mostly by the sea meant there was always some nice (dramatic) scenery to look at.  Plus we had a lovely Saturday in Brighton. 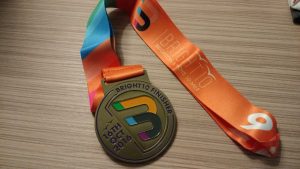 I also really love the medal, which helps!

Have you ever been a pacer runner? Do you like following the pacer runners? I quite like them, but often I find that they run more to gun than chip time, even if they start further back. Would you choose to run in wind or rain? It did occur to me that you can do hill training if you have a hilly race, but you can’t really do wind training! Have you been watching The Fall?