On the Friday before New Year’s Eve, we drove down to Southampton so we could visit family on the Saturday. Handily, they have a parkrun that I could run to from our hotel, so that was the plan.

I knew where the park was, as we often park near it and then walk into the town centre. However, our hotel was in a new part of town surrounded by lots of building work, and I wasn’t quite sure how to get to the centre from the hotel- I got a bit lost, and when I looked on my phone at the maps the 1.8 miles to the start had turned into 2.3. You can see in the above picture where I headed south before realising and heading in the right direction!

Anyway, I made it (thanks google) and with a bit of time to spare. The new runners briefing was very useful as I had forgotten to even look at the course page to see if there were laps (yes, there are two laps on this course- I heard some people talking and it seems they have a summer course too so that may be different).

There were so many people! I’ve never seen one like it. The finish funnel should have been a warning- normally it’s only about 2 metres long. 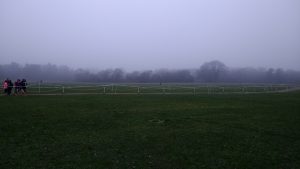 I was glad of the new runners briefing as I could not hear any of the main briefing- I was too far back (and not even at the back) and some people were talking. I did join in with the clapping (3 sets- one for the volunteers, and I am guessing that some people got their milestones?).

I took it gently- I hadn’t run since doing the 10 mile race on Tuesday, and had since been ill, so I felt very tired even after the run to the start. The course itself was good- all on tarmac paths, it was flat, then sloped up for a bit, before going down towards the start. There was a handy sign with “First lap (arrow), Second lap (arrow)” on it (I forget which way the arrows went)- and of course with that many people it was easy to follow the runners around you. It was very congested though- I think even in the second lap it didn’t thin out much. I did get overtaken by a couple of the front runners- they run so fast but also so smoothly- it was interesting watching them beside the rest of us all shuffling along.

Then, the finish, and this was so impressive. When you finish any parkrun, you are given a little plastic token. It took me many runs to realise it had a number on it (your finishing position), but it also has a barcode. As you finish, the person timing presses the stop watch, and then you move to the end of the funnel to get your token. When you have got your breath back, you get your finish token and your personal barcode scanned together, and later when the results are processed, the finishing position and times are matched up. I was wondering how they would do it on such a large scale. I was sent into the left hand funnel, where I joined the queue to get the token. 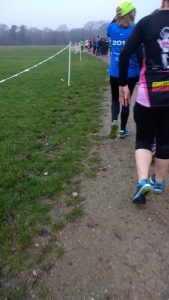 A little after, someone was sent into the right hand funnel, carrying a big letter D. They then closed off the funnel that I was in. It seems to work so that once all the people in the C section had finished they would start giving tokens to the D people, and so on. So very clever. 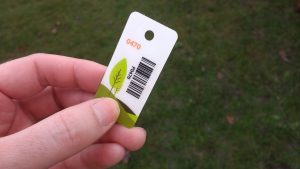 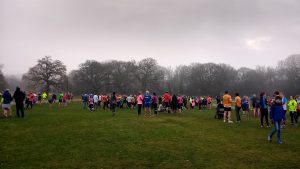 After I got my chip scanned, I started walking back (although I got confused and ended up walking away for a bit), and then once I got out of the park I started running again. I was very tired after that and had already decided that I would not be doing a parkrun on New Year’s Day. 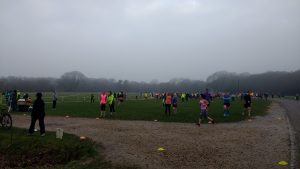 My time came through later- 30.22- not bad seeing as it was wedged in a longer run. If I go back (I am sure I will) I will have to try and beat that time and at least get under 30 minutes. When I reached the town centre, I popped into Starbucks to get us both breakfast, and walked back to the hotel from there- I’d run over 7 miles at that point and it was probably another half a mile to go- I was so tired!

After breakfast, we had a quick (is that possible?) visit to IKEA, as we could walk there from our hotel (we wanted to look at a chest of drawers for our bedroom, and ended up getting a shoe rack for our utility room, plus a few tins for baking bits), and then we drove to Andy’s Grandma. Andy was going to football, so we drove back, basically to where the parkrun starts, and then walked into town. I am not the best shopper, but I had a few bits to do (I needed to return a jumper to John Lewis, and I had some vouchers to spend). I also wanted to go to Decathlon as lots of people I know seem to get great bargains on Asics trainers. Anyway, I walked there and found a few that looked good, but then on closer inspection they had no size 6’s in stock for any of the shoes- boo! I’d packed a magazine with me so I went and sat in a cafe with a cup of tea to wait for the match to finish- that is a better use of my time than more traipsing around the shops. By the time we had walked back to the car I had walked over 30,000 steps, so it was quite a shock to the system after being fairly sedentary for a few days.

How many people go to your local parkrun? What is your highest and lowest placings? The highest before this for me was 264 at Wimpole Estate, and I have finished 16th at both Aldenham and Crissy Field. Do you like shopping?