Rickmansworth parkrun only started in March this year, but it is regularly attracting 300+ runners each week. Since I heard about it (I think at the parkrun volunteer celebration evening) it’s been on my list, and Dad quite fancied it too, so we had penciled in this Saturday as a date we could both do.

Although it’s in Hertfordshire, it’s around the M25 a bit (I don’t think I have ever been there before, I’ve just seen it on signs when I am coming back from Heathrow etc.). As it was on my way I would be picking up Dad, and we aimed for around an 8am pickup, as google thought it was 25-35 minutes away. It was raining slightly when I left, which I wasn’t expecting, but thankfully it stopped as I drove over.

The satnav on the course page took us right to the car park at the Rickmansworth Aquadrome, which is where the event takes place. We arrived at around 8.40am, and despite there being loads of runners, the (free) car park had plenty of space.

The meeting point was right next to the car park- very easy to find, and also handily next to a cafe and toilets. It was a bit chilly and we both regretted not waiting in the car for a bit longer.

The new runners briefing started at about ten to 9, and we had a very friendly welcome (as usual)- the lady asked where we were from, explained the course (two laps of the lakes basically, and through some woods), and then wished us well before talking to the first timers. What I particularly loved was that they mentioned this:

(From their facebook page). We didn’t use the cafe as we wanted to get back to see Mum, but lots of people did, and how fantastic that they raise money for charity.

We ended up chatting to two tourists from Longrun Meadows- we commented that it sounded like a lovely place, and it turned out to be in Devon. They asked us where Panshanger was, as they had family close by so tried to visit a different one each time they were up here. A lot of parkruns take the name of the town or city (St Albans, Rickmansworth, Tring) but then so many of them are more specific to the park or the area, so you have no idea where they are from without looking it up.

At around 5 to 9 we were lead to the start, which was a bit further back along the path. Everyone turned and faced the way we had come so we worked our way back a bit.

With 375 runners it did feel a bit congested at the start- we had started a little bit too far back and spent the first mile trying to overtake people as the paths widened. We ran a fairly comfortable pace because of this, and managed a good chat. Dad had been away on a cycling holiday in Croatia, Montenegro and somewhere else, so I enjoyed hearing about it. We also enjoyed the scenery- especially on the second lap when we didn’t have to be constantly looking for gaps between people. He’d said to me that if he felt good he quite fancied pushing it for the second lap. After a mile or so, it did feel less crowded and we picked up the pace a bit, but at the second mile I told him to go ahead if he fancied it as I didn’t think I could go much faster (I had 8 children off in my class on the Friday due to stomach bugs, and I had been up a bit in the night with stomach pains- all fine but I didn’t want to push it too hard).

I did nearly keep him in sight (it’s fairly twisty so often you couldn’t see that much further ahead), and I felt like I slowed towards the finish- I was steadily overtaking people during the run, but in the last little bit a few people overtook me. In fact when I looked on Strava it was a royal flush negative split- 9.45, 8.52, 8.49, 8.11.

I was dripping in sweat when I finished! It was turning into a fairly warm day, an despite it being overcast at the start, it was quite sunny.

We watched the runners come in thick and fast, and attempted a selfie in front of the cafe to commemorate the tourism.

The parkrun was really enjoyable- I liked running around the lake and through the woods, and because it was only two laps I didn’t get lapped at all. It is a busy one though, so if I was to revisit aiming for a pb I would start a bit further up if I could. It’s so hard to judge though. 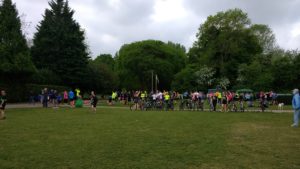 The good thing about going to a lapped course for the first time of course, is that you get a “PR” and a second place on all the Strava segments!

After driving home, Mum made us pancakes with blueberries and mango- delicious, and a great start to the weekend.

There are still two Hertfordshire parkruns that we have not been to (Cassiobury and South Oxhey, both around the Watford area) so we need to visit them at some point. There’s another St Albans one starting around August too- the list keeps getting longer!