I love a road trip. We have had some brilliant ones over the years, and this Easter was no exception (and no long haul flights either). When we have a long drive we load up the podcasts and head on out. 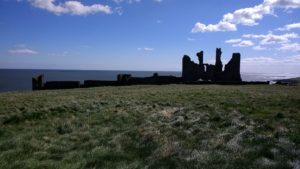 This time we had classics like Wittertainment/ Kermode and Mayo’s film review (BBC Radio 5’s film podcast), Pop Culture Happy Hour (they discuss TV, films, books, music), and More or Less (from Radio 4 -they look at numbers in the news and discuss how factually accurate they are).

A few years ago we loved listening to Serial (although later the series 2 wasn’t quite as gripping as we weren’t aware of the story- whereas it had been big news in the US)- they had made a new podcast called S-Town so we listened to all of that. It was released in one go, like Netflix do, so you could listen to one after another instead of having to wait a week. It was a very interesting story, and it kept going in different directions. If you have listened to it, the Here’s The Thing podcast (hosted by Alec Baldwin) had the presenter Brian Reed on it, and that’s worth a listen too.

I’d seen on Joy the Baker blog a recommendation of The Accused, a podcast by the Cincinatti Enquirer newspaper, where a journalist investigates an unsolved murder from the 1970’s. Very well done and very interesting- this reminded me more of the first season of Serial.

We started to listen to the BBC podcast Murder in the Lucky Holiday Hotel, but I found the first one very complicated (not helped by having a complicated journey that day with lots of sat-nav directions). I think I need to start it again and listen from the beginning, but on first impressions it wasn’t as well put together as the US ones.

Some of these are very serious, so when we needed something more light-hearted, the Adam Buxton podcast was brilliant for that. I have mentioned it before, but I used to love the Adam and Joe show when I used to babysit, and then I loved their radio show and podcast. Adam Buxton on his own is different (obviously)- still the same funny jingles, but he intereviews a different person each week. Sometimes I have heard of them (Louis Theroux, Zadie Smith), other times I haven’t (Mark Maron) but they are all so interesting. One of my favourites was an old one with Michael Palin, but they have all been great in different ways.

We didn’t have time for any others, but I did hear an advert for the second season of Someone Knows Something (a Canadian podcast investigating the disappearance of a 5 year old child in the 1970’s)- so I shall have to add that to our list of road trip podcasts- we are off to Scotland in a couple of weeks so maybe we will get around to it then.