The weeks are flying by! So here is a random catch up of thoughts (which turns out to be a lot of baking). 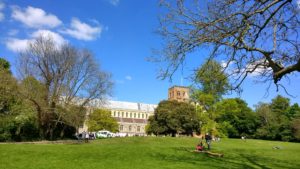 St Albans Abbey in the sunshine. Weeks ago we had parked outside St Albans and then walked into town via a flooring shop to look at some samples. We were going to visit The Pudding Stop but it was very busy so we got a takeaway instead (peanut butter salted caramel brownie..).

I have their recipe book so I decided to make them for work the next week- they went down very well. Although in the recipe book you add the caramel in the middle, with more batter on top, but I think next time I would just put the caramel on the top with the pb. 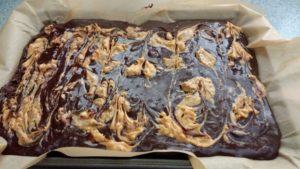 Last week I made a raspberry and white chocolate loaf cake, and it was very well received. This week I used the same recipe but made it into a lemon and blueberry cake instead. I doubled the mixture and made a tray bake for work, topped with a little lemon icing, and then a loaf cake to take around to Sunday tea, with the rest of the white chocolate melted and poured on the top. 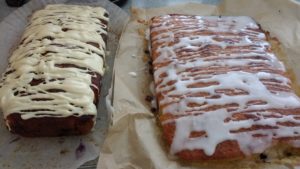 I have been sent some products for dry and sensitive skin, including some lovely What Skin Needs soothing skin gel (which is good for wind burn- I have not tried it yet as it hasn’t been as cold, but I do have a problem with this after a long run in the cold so I know it will be useful), and skin balm (I love this stuff). It contains plantolin, which (from their press release) “is a patent-protected active plant extract, scientifically proven to soothe, renew and protect. This key ingredient is derived from the Australian indigenous plant, centipeda cunninghamii, and is internationally patent protected for its novel active compounds that provide a natural synergy of anti-inflammatory and anti-oxidant activity. Plantolin extract is used in Australia on wounds to speed up the healing process and stimulate tissues regeneration“.  It also smells lovely (it contains lavender and geranium oil which I love as a combination (we had that on our foreheads at the end of yoga last week). I do get dry and itchy skin, and I have trouble finding creams as body butters tend to feel too greasy and thick, some very scented ones irritate my skin, and others don’t seem to sink in very well. Before this one I was using a Body Shop almond milk and honey one, and this one works just as well.

I was also given a massage candle. (I didn’t know what that was either) 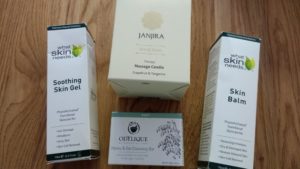 It turns out you can use the melted candle wax as a moisturiser- it has a pouring lip at one end, so once a bit of the wax has melted, you blow out the candle and then pour carefully onto your skin. I haven’t been brave enough to try that yet, but the candle does smell lovely- a fresh citrus smell which is perfect for spring (grapefruit and tangerine). 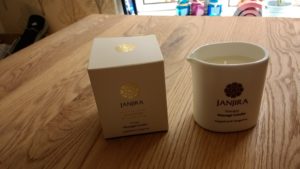 I’ve had a real mixture of running recently. As I haven’t been training for anything specific (eg the Wings for Life was just run as far as I fancied) I’ve just been going out as far as I would like. Last Tuesday our running club started the tradition of the 8 (and a bit) mile route on country roads and paths around Essendon- a tiny village near Hatfield. We only do it once a month in the summer, when it’s light enough to finish before it gets dark, as we have to cross a dual carriageway, and some of it is on country roads. We usually do around 4-6 miles on a Tuesday, so to push it up to 8 always sounds hard, plus this route has some big hills, but it’s so satisfying once it is done.  I skipped a run on Thursday in favour of going to the cinema- we went to see Guardians of the Galaxy 2- I thought it was quite fun, and I am not usually into the comic book films. The end did drag on a bit though, and I lost patience with the extra bits in the credits, so we left after the third one!

Last Sunday I didn’t set an alarm, and I’d been out for a meal the night before so had a fairly late night (for me- midnight!)- I decided to run to the lakes and back, but when I got there the route I usually take was cordoned off. 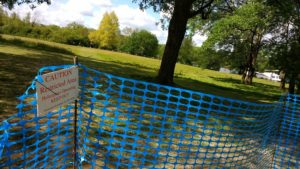 It said helicopters were using the area so I was taking no risks! There was some sort of car show going on, so I had to run up a hill, along the top and back down again before getting to the lake. I had no idea how long the run would be- I guessed around 6 miles, but it turned out to be just over 7. I think 7-10 miles is a good Sunday morning Goldilocks run- not too short, not too long. 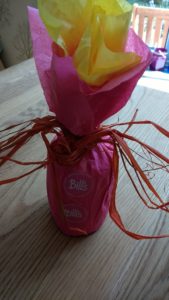 The day before my birthday (weeks ago now) we went out for brunch at Bill’s- my favourite place for brunch (or sweet potato fries!)- I have been using the app to pay for the last few visits (you link it up to paypal or a credit card) and I had enough stamps for a jar of jam- they wrapped it up so beautifully too. 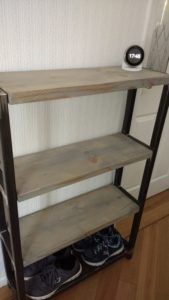 A while ago we ordered a new shelving unit from St Albans Wood Recyling co. – they use recycled wood to make bespoke furniture. (A side point- this is a bit like parkrun for wood as it is a not-for-profit, run by volunteers and works to support people getting back into employment). We’d been for a look around their “ideas hub” (a sort of show- room, but it more shows things they could make with the wood, and then you give them the exact specifications and they do a quote) and seen something similar that we liked, so they made one to fit perfectly between the dining room and living room doors. The bottom shelf is a metal grid so it can be used to store shoes. I just need to actually put some books or something on it- the thermostat is a little lonely!

Do you have many loyalty cards? I feel like I have so many (I even have one for the Montezuma’s shop in Brighton- even with 3 visits a year it will take me a long time to earn a free bag of truffles!). I do quite like having it on the app but then if I can’t get internet (or remember my password…) it’s more complicated. Have you been to the cinema lately? I still haven’t seen Beauty and the Beast, but as the cartoon is not my favourite Disney film I haven’t been that bothered. We did watch Moana last Friday as I was given the film for my birthday- that’s more like it! What sort of distance do you like to run? I do prefer a slightly longer run (because I would rather run slower but for a bit further than have a short and gasping for breath run), but up to half marathon is long enough I think.

*I was sent the sensitive skin products in exchange for a mention on my blog. All opinions are my own.