This Saturday it was the first birthday of Ellenbrook Fields parkrun so it was time for some celebrating.

But first- the week leading up to it: I had a sore throat on Sunday and Monday, so on Tuesday I did a little run/walk on my own instead of going to the club run. On Wednesday I sneezed a few times and wondered if a cold was on the way, although yoga seemed to help as it was a very calming session (and nothing came of the sneezing). I did another short run on Thursday which was fine, but by Friday I was sneezing lots and had very sore sinuses. I didn’t want to miss out on the  birthday celebrations so I told myself I could keep the tail runner company if I felt bad still. 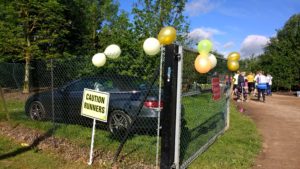 Even though the weather that week had been total pants, the sun shone on Saturday morning and someone had gone around putting balloons and bunting up. 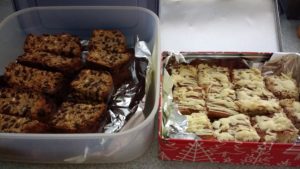 They had asked for cakes, so on m way home from work one day I stopped to get some baking supplies and made a tea-bread and then a raspberry and almond tray bake- basically the raspberry cake from the CCC book, with ground almonds subbed for some of the flour, and then topped with white chocolate and flaked almonds. 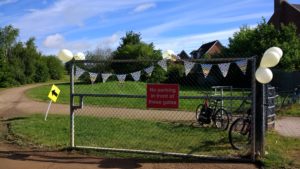 Loads of people turned up! They were trialling a pacer event and I think had pacers from 22 to 32 minutes.

Dennis and Eleanor Draper (our “local celebrities”- they were the oldest couple to run the London marathon this year, and have been interviewed on MT before) set everyone off. 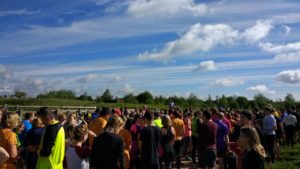 I actually felt loads better on Saturday morning, but was being very sensible. 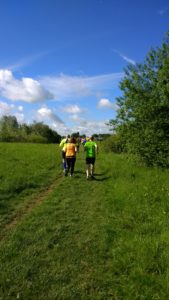 I started near the back but actually felt OK (after having an early night and having a mixture of peppermint, lavender and tea tree oil to help with breathing)- I stopped to take some photos as it was gorgeous out there.

I always love the end of the first little loop as all of the timers and RD’s and funnel managers etc. are all there to give you a little cheer as you go past. 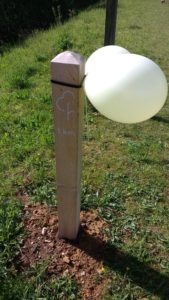 Even the km markers had balloons! I ended up running with a friend who was being the 32 minute pacer (although I think I distracted her somewhat as near the end she realised she was going a bit too fast- I ended up just over 31 minutes). It was very enjoyable and I felt fine when I finished. 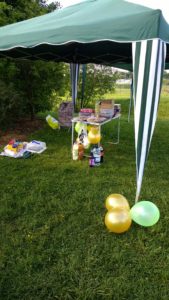 There was still plenty of cake when I finished, although all the raspberry and almond cake had gone. I had a little piece of lemon cake and then hung about cheering everyone else in and chatting to lots of people in the club.

The rest of Saturday was fairly boring (school work with a little walk into town to break things up), but our fox cubs did visit our garden on Saturday evening- around 9.30 pm each night now they seem to come and are hilarious- chasing each other about, jumping in the bushes and hanging from the branches by their teeth.

On Sunday I didn’t set an alarm, and so didn’t head out on my run until gone 9am. It was warm but with a breeze so actually fairly nice for running. 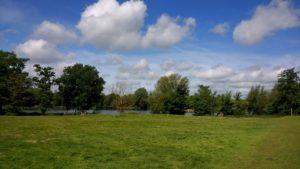 I had decided to add on some distance to my run from last week (I did 7 and I wanted to do 10 this week), although I thought going further would add on 3 miles but it only seemed to add on about a mile and a half. I could have run past home and gone on a bit, but I was so thirsty by that point that I decided 9 miles was enough.

After more work (and spending ages getting very annoyed emailing my MP and the other local candidates about education, fox hunting -I am very against this and do not want to see it voted back in again- and how they will support the rights of EU citizens) my brain was frazzled so I headed out into the garden for some pottering. 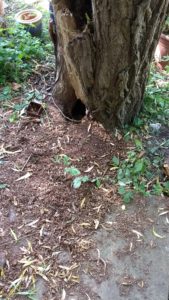 I found that the fox cubs had been digging a hole under the willow tree so I filled it in and put a stone in the way- I don’t mind them digging but I don’t want the tree to become unstable. 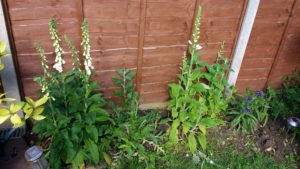 The fox gloves are starting to flower too! (This post is very fox-heavy it seems!). This is the only patch of garden that I have added plants to as we are going to plan it all out properly. There are cornflowers and poppies there too. 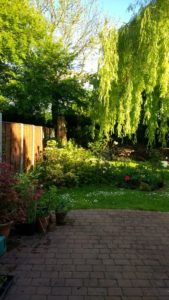 I felt so much better after that- just an hour or so of pottering around lifted my mood.