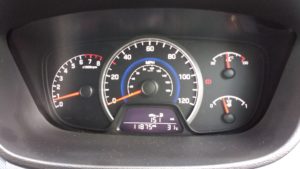 31 in my car. And yes I know that is not an official temperature measurement but it gives a general indication of how hot it has been

It was obviously hot on Saturday (when I marshaled at parkrun) and on Sunday (when, after a very hot run we ended up wandering a lavender field in the middle of the day in no shade..) but I didn’t realise it was going to be hot all week.  On Monday I had a massage booked- I did consider cancelling it but thankfully the room had a fan going so it wasn’t too bad. I met Andy in town afterwards 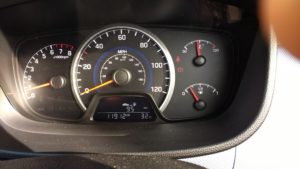 32 degrees. Our club run was originally going to be our 8 mile hilly route, but thankfully that was changed to 5 miles in the shade, and fairly flat. It was actually OK in the shade, but of course a very sweaty run. I really enjoyed it despite being totally baking. 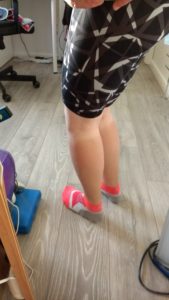 I had braved shorts (I don’t tend to find shorts that comfy as they ride up- these ones are better as they are fitted but I don’t wear them very often)- everyone was finding my tan lines rather funny- I think my capris are all the same length which is why the line is fairly pronounced. 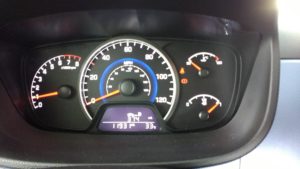 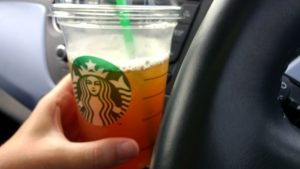 I caved and got an iced tea on my way home!

As it was the summer solstice our yoga teacher had mentioned about doing something special. When I got there she had set the mats up outside (we are normally inside a little community centre room looking out onto trees and fairy lights)- she had set out candles and some joss sticks to try and keep the mozzies away. Apparently some people were doing 108 sun salutations as 108 is a special number (and one is one on the left side and one on the right) but we weren’t going to do that many. We had some lovely poses to open our shoulders, and then we had a go, doing a set of 9 (9 on each side), having a rest and then doing another 9. Even though it is fairly gentle I worked up quite a sweat. At times we came off the mats and held the poses on the grass which added another dimension to them.

At the end laying on the mat looking up at the trees swaying in the breeze, and the swallows flitting about in the sky was the most relaxing cool down, and a perfect way to celebrate the solstice.

Thankfully it was cooler. 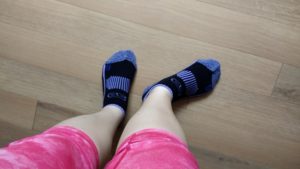 I went out on a 4 mile run after work, trying out some new socks. I was sent some Storm Bloc trainer sport socks. Although black and purple is not the most summery of choices, I am very glad because my white socks just get stained with mud and never seem to go back to being white. I don’t think these have left or right socks (couldn’t see marks on them anyway) but they were comfy enough, and because they are more of an anklet design they look better with capris than my usual socks.

Again, a bit cooler. After work I went to see my mum, and my sister and niece turned out to be there too, so we had a lovely catch up. I couldn’t stay too long as we were heading to Kent on Friday night, but it was a great start to the weekend. I do like the sunny weather but I would rather it was not so hot that sleeping isn’t such a struggle.

How did you manage in the heat? Did you do anything to mark the solstice?

*I was sent the socks in exchange for a mention on my blog. All opinions are my own.