The summer has well and truly arrived! (I have been very glad of the air-con in my car this week!)

On Tuesday I was planning on going to our club run- I have to drive there and as it starts at 6.30 I usually leave at around 6.15. I have a meeting on Tuesdays but this week it finished earlier so it wasn’t too much of a rush- I got home, finished some work, started making some iced tea and then got a message from Andy- he was going to be back late and we had shopping coming between 6.30 and 7.30 so I couldn’t go out. 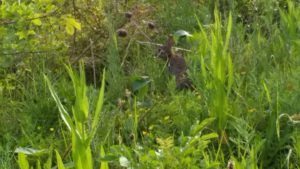 In the end he got home around 6.45, so I headed out for a run on my own- I decided to head along the old railway line, and the little hill was in shade so I did some repeats up and down it. There were rabbits in the grass by the side so I got my breath back a few times and tried to take some photos as they didn’t seem bothered by me being there.

On Wednesday yoga was fantastic as always. The room we use is part of a small community centre with a garden that joins to all the houses. There are fairy lights in the trees, and so we have our mats facing the garden. It’s so peaceful. I struggled with my vest though- I wore a running one and tucked it in but it was not really long enough so kept coming out of my waistband. We did loads of twists which just feel so good- I think after sitting in my car for an hour each day anything like that is so beneficial. 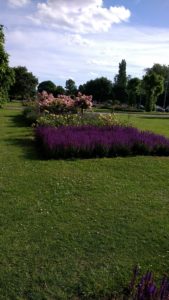 On Thursday after work I wanted to pop into town- I keep seeing these cool giraffe trousers in Fat Face, but then I wondered if they look too much like pyjamas. But then it is so hot at work and pretty much everyone else wears that sort of style, so I went to get them. The centre has a main road with a wide grass section in the middle, and it was full of lavender plants and some other purple ones too- so pretty. Fat Face didn’t have them in (but they did have a giraffe vest, dress and shorts) so I looked in John Lewis and found them. 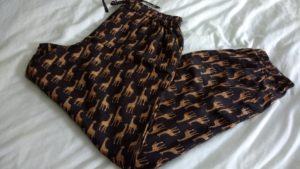 I did buy them but I am not sure I will keep them as I don’t know  what tops will go- I don’t know about these things! 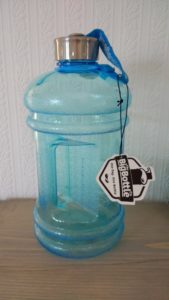 I was sent a big bottle from The Big Bottle Company last week. It is huge! It’s 2.2 litres and is BPA free, it’s dishwasher safe and can be put in the freezer (for a short amount of time to keep the water cold, and of course if you have enough freezer space- we don’t). The idea is you can monitor your water intake during the day. I love the aqua colour, but I have used it to store water in the fridge, as if I took it to work it would become tepid very quickly- our classrooms are hot. Having some really cold water in this heat is great though, and means I save water as I don’t need to run the tap for ages for cold water to come through.

I had a short run on Friday after work, and I am trying to not run on consecutive days at the moment as my heel is still not healed, so I emailed and said I would marshal at parkrun this Saturday. (Also, a weekend story from last weekend- after taking my car to the garage, I was waiting for my dad in the car park at St Albans- it gets very busy and time was ticking on and spaces were filling up- I found a space in the top corner of the car park and stood by it, hoping that Dad would turn up and see me. A lady drove past and asked me if I was saving the space- when I first got there, there were other spaces but by this time there were none. I told her I was waiting for my dad but he hadn’t come, and at first she offered to drive away. I told her to park there as I said I have no right to “bagsy” the space, so she said “If he turns up, tell him to block me in- I’m in no hurry to leave after the run”- in fact Dad had parked elsewhere as he left too late and thought the car park would be full, but I loved her attitude. Aren’t parkrunners lovely?).

Anyway, back to this weekend: 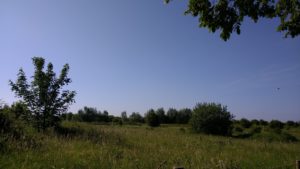 I always prefer to marshal when it is this hot, and luckily I was put at a shady point of the course. 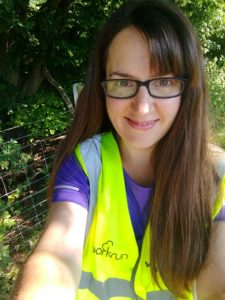 I’d walked there with another marshal who was just around the corner, and she suggested we take a short cut through the cow field. On the way there, it was OK as the cows were far from the path in the shade. 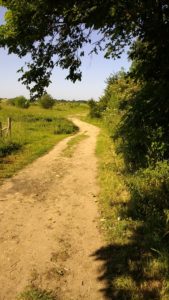 I enjoyed cheering the other runners on, but they all looked so hot (I got fairly hot in the high viz) so I knew I had made the right decision. One runner asked for some water to be sprayed on them- next time I’ll bring a bottle as we do have a mist attachment on a bottle.

However, when we finished and walked back, the cows were everywhere. 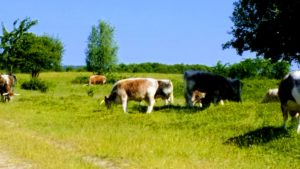 That was the path we had to walk along! They were so close, and they have huge horns (they are longhorn cattle). I had no idea there were so many of them. 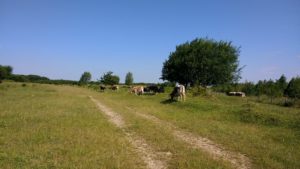 I was not a fan of this! I am not too keen on cows- they make me nervous and I know these ones are used to people walking about, but there were a few little calves (one was born on Ellenbrook parkrun’s first birthday last month!) so the mothers would be more protective at this time of year. 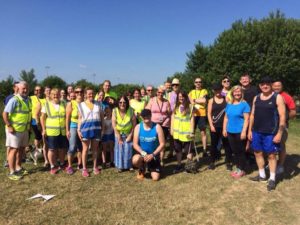 When I got back the final few runners were just finishing, and we were all asked to have a team photo for Mark, who has been on a capital adventure, touring the London parkruns for charity. I had forgotten to wear my cow cowl this week- whoops! His blog is here if you are interested.

How have you been coping in the hot weather? What on earth should I wear with the giraffe trousers?

2 thoughts on “Braving the cow fields and other weekend stories”