After going to Maidstone parkrun we first headed to Nymans, a National Trust garden (it kept making me think of Newman from Seinfeld). There were parts of a ruined building there, but it was basically huge gardens which we walked around for ages, getting inspiration (and buying a plant) for our garden. 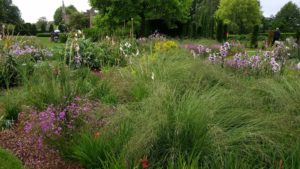 Rain was forecast but luckily there were only a couple of short showers and nothing to make us head inside. 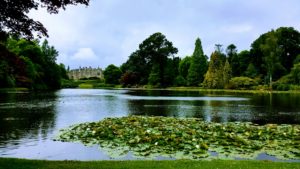 We then went to Sheffield Park (confusingly in East Sussex) and had another walk around the gardens there. There were loads of ducklings swimming about on the pond. 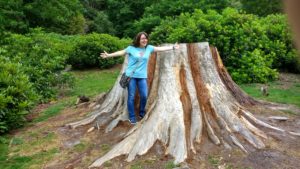 They also had some huge Californian Redwood trees (including this one that had been chopped down)- not quite like Yosemite but some were 30m high.

Of course we had to visit the tearoom for a bit of lunch, before we drove to Tunbridge Wells. We had booked Bill’s for dinner and had an hour or so before so had a little wander around the shops. I was very excited to see they had a Bluebird Tea shop there!! Of course I bought an iced chai latte (they make it with almond milk and their own chai concentrate plus a little honey and it is so delicious) . 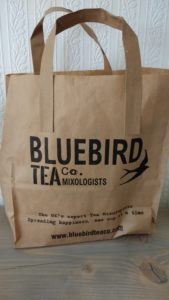 I also bought a few fruity blends as we have been making iced tea at home and running our stock a little low. 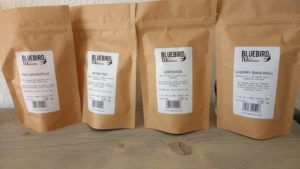 I went for Pink Grapefruit (which they had a sample of in the shop- so zingy), Retro Ted (coconut, pineapple, lemongrass and rose), Lemonade and Cherry Bakewell (white tea, almond and berries). Now the problem is- which one to make first?

On Sunday we headed over to Knole park for our final NT place of the weekend. 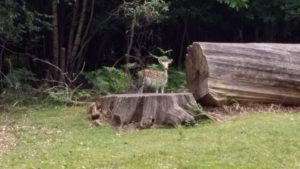 It reminded me of a cross between Ashridge and Hatfield House with huge gardens filled with people walking and picnicking, as well as a house, cafe and shop. We had a quick walk around the house (I am not so keen on the insides but it is in our pass so may as well look) before having a lovely long walk around the grounds. 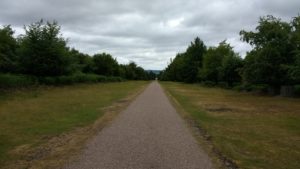 Even though the car park was busy we didn’t pass many people as the grounds were so huge- we even walked past a golf course at one point! 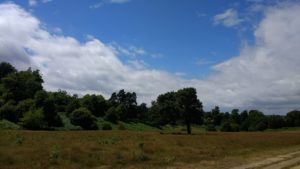 While we were walking the sun even came out for a bit. 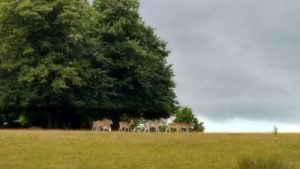 After a visit to the tearoom of course (we shared some lovely fruit cake) it was time to head back- these deer were right by the car park.

Three more NT place visited- we are going to get value for money from our membership!

We got home at around 4.30, so I decided to give the Strava mile a bash- they are challenging people to run their fastest mile in June. I could not work out a one mile route without any road crossings, but I worked out that if I ran out the back way from home there is a little path through some woods that then runs through a park. You then run out onto the pavement but it only crosses one road, which is a cul-de-sac, so there is less chance of having to stop. I would have to turn around at the end, but I would just run until I heard my watch beep. 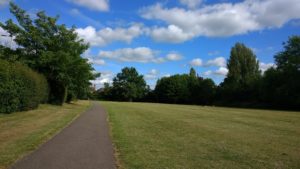 I ran gently to the start and didn’t start my Garmin as I didn’t want to have to stop it and save it separately. I tried to look on my phone at Strava to see my recent fastest mile but I could not work out how to find out (my fastest mile is apparently 5.44 which is when my watch got confused as to where I was…). I decided that anything under 8.30 would be good as that is the fastest mile I have run in a parkrun.

It was hot and I felt a bit hungry as we hadn’t had lunch, and I felt like I kept looking at my Garmin while I was running- I hardly ever do this. It always seemed to say around 8.22 which was good. I had to turn around at about 0.75 miles which was annoying as you lose momentum (I tried to take it as wide as I could)- there was an option to turn right at the end of the road but then there are more road crossings and I didn’t know where the mile would end. The final .2 seemed to take ages- I ended up counting to 100, and then decided to run on a bit after my watch beeped as sometimes Strava takes a bit of mileage off my Garmin (e.g. a 5 mile run will end up being 4.9 miles on Strava)- I didn’t want that to happen! Once I felt like I was safe I just stopped and gasped for breath, before very slowly heading home. When I uploaded my time I had run 8.17 which I was pretty pleased with. I don’t think that Sunday afternoon is my best time, but it was the only time I could have managed it before the end of June, and it was fun to have a go.  At least now I have a baseline and something to aim from.

Also, look at this: 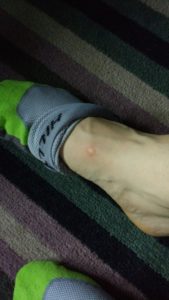 I loved doing yoga outside last Wednesday, but I did get bitten on my foot and my leg- the one on my foot was right where my sandal strap was, and it was super itchy inside my running socks (that’s the hotel carpet!)- I ended up heading to Boots in Tunbridge Wells to get some after-bite stuff. It’s only really gone now and that’s a week later! (Although I should not complain too much as some people get a much worse reaction than that)

Did you try and attempt a Strava mile? Do you have some nice parks close by? Do you like a picnic?