On Tuesday night last week we had our monthly 8 mile route planned out (we were going to run it the week before, but it was so hot that we ran a shorter and shadier route, and pushed it back a week). It was raining very hard on Tuesday! When I got to the meeting point we were told we would be running it in reverse- it’s a hilly route anyway, but it would mean the last couple of miles would be gently downhill. Of course this meant we had some beasty hills to run up earlier on.

It was good fun, but the rain got harder as we ran on. Usually we cut through a bridleway for part of it, but a couple of the group wanted to go along the road- we ended up having a race (the bridleway won) and this resulted in an 8.55 mile in the middle of the run! Not too shabby! The last couple of miles downhill should have been OK, but the pavement is right by the road, and under trees, so we were getting sprayed by cars, dripped on by trees, and rained on. I was fine when running but the second I stopped I was freezing and could not wait to get home for a hot shower. 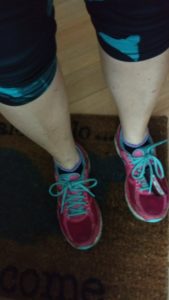 I took a photo as there was mud splashed all up my legs although it didn’t come out that well.

By contrast yoga on Wednesday was inside (more rain) although our teacher did say if the weather was good we could do another session outside later in the year. It was a fairly strong session where we held poses for a long time- some of the lunge poses were very tough on my legs especially after the longer run the day before, and I think I nearly fell asleep in the final relaxation!

On Thursday I had a short run after work, and on Friday I met a friend at The Waffle House for a long overdue catch up.

The weekend was going to be so busy- Wimbledon parkrun with Dad, Crews Hill plant shopping in the afternoon, a meal out with my family in the evening for my dad’s birthday, marshaling in Milton Keynes on Sunday morning, stopping by IKEA on the way home and then possibly visiting Andy’s parents. Although I still had two early starts (not as early at a weekday, but I was still leaving home at 7.30am both days which is not much later than when I leave for work), we ended up having Saturday afternoon at home, and after measuring the things I wanted from IKEA it turned out they wouldn’t fit in my car so we will save that for another day. 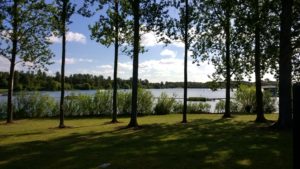 I had to report for marshal duty by 8.30am, and luckily it had taken a little under an hour so I had a bit of a wander on the way to the tent.  They asked for a tail runner but as I wasn’t in sports gear (more importantly a sports bra) I didn’t feel I could offer, although as it turned out the tail runner walked the course. I think it would have been good to know in advance as I would have offered to do that straight away. We had to hang around for a bit but soon they asked for people who would like to walk around the course to their position so I headed off with the first group. 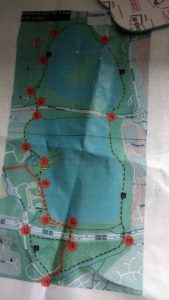 We walked the course in reverse and I ended up being on the first point we got to, basically right at the finish funnel, as there was a 5k and 10k option. As the race didn’t start until 10, and this was still before 9, I walked along with the rest of the group. We ended up talking about parkrun, as there is one at Willen Lakes (where the race was)- one guy mainly did that one and another guy was on 300+ total runs and well over 100 different courses- a proper uber tourist! 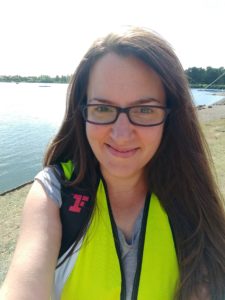 After getting a bottle of water from the tent (we had been told to have one) and chatting to some of the marshals in the finish area, I got into position. 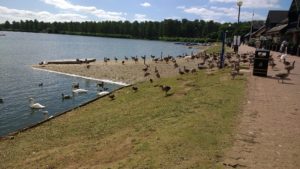 At one point a lot of geese came out of the lake and started filling the path- I wasn’t too keen on them, but luckily they didn’t come too close to me. There was also a black swan- I have only seen those before in Madrid. I could hear the music playing from the start/finish area so it ended up being a great location with a good atmosphere. 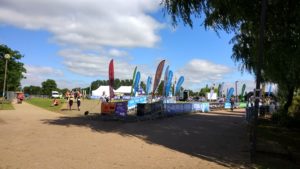 Once the race started I had a bit of a complicated job- basically orange numbers were 5k runners, and they had to do one lap of the lake, so when they got to me I could direct them to the finish. Purple numbers were 10k runners, and they had to do 2 laps. However, people could either drop down or step up to the other distance, and to add to that complication they had run out of one colour of race bibs…. I spent a long time shouting “5 k runners, well done, head into the finish, 10k runners you’re half way there, keep going around”. Initially it was OK but with a race with all abilities (and like parkrun, people could walk the whole thing) there were 10k runners finishing their second laps (the winner finished in around 40 minutes) when there were still 5k runners on their first lap.

At one point a guy watching came to ask me how I would know when to send the 10k runners to the finish- I had to explain that they need to remember when they have run the 2 laps- I can’t recognise all 800 runners! 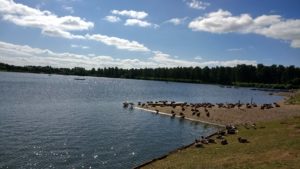 Once the tail runner came through it was easier as then everyone was being directed into the finish, so someone came out and moved a fence to make it clear (and so no-one could carry on with another lap).

It was really good fun- I love marshaling at parkrun as I just love to cheer people on. I managed to get smiles from most people, although it did surprise me just how many wore headphones (it was allowed as it wasn’t on roads). I am sure some of them heard me but some of them didn’t register anything- a shame to miss the atmosphere of a race.

Once most people had finished, they then had a mile race.  This caused one of the organisers a lot of trouble as he kept cycling around the course trying to find out how many runners were left. I thought the mile was for children, but it was for anyone, and I saw a lot of the people running heading back out (it was £6 and you got another medal..). The marshals all lined up along the main path, and the runners had to run out for half a mile and then back. Although they were running the opposite direction to the main race- it would have been so much easier if they did it  in the same direction as they wouldn’t needed to have waited for so long. Some really young children took part and it was great to see their grinning faces as they headed to the finish.

I do think it would have been easier to have a few more barriers out, as a lot of people were just wandering across the path, totally oblivious to the runners. I was doing my best to warn them (politely of course) but at one point a kid on a scooter nearly took out a runner.

Once the mile race was over we were put to work clearing everything out of the tents, before taking apart the metal fencing and carrying the fences up a mound to be put on a van. This was hard work and my arms and shoulders were very sore the next day. Just before 1pm we were released- given a goodie bag and t-shirt (the sizes were so tiny- I ended up getting a large but the XL seemed pretty much the same size), and we also get a subscription to the magazine for 6 months. 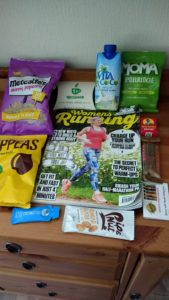 As I didn’t need to go to IKEA, I just came home. It was such a lovely day that we ended up walking into town, down to the lakes, around them and along country roads for about 6 or 7 miles (it’s one of my running routes and although we took a slightly different route through town I don’t think that would cut any off).

Are you scared of geese or any other animals like that? Do you wear headphones in races? Do you like running in the rain?