I mean, I say it every year, but the summer just flies by so fast. It’s now September. I got an email from Starbucks about pumpkin spice lattes. I do love autumn but I am not sure how it’s got here so quickly!

Last week was the final week of the holidays. After getting back from France around lunch time on Monday, we headed out on a walk- along the old railway line and then back along some paths- some were very overgrown with stinging nettles. 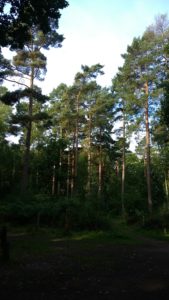 My quest to run 100 miles in August continued on Monday with a 9 mile run- I sorted a new route made up of the beginning of the route with the big hill (but avoiding it) and finishing up with most of my 5 mile route, but backwards. At one point in the woods I ran along new paths and found this interesting bench. 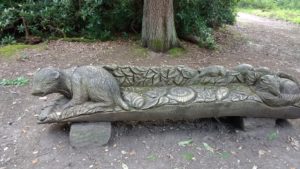 I was very hot by the end, and although I had originally hoped for 10 miles, I could not be bothered to run up the road to make up the numbers.

After a shower, breakfast and lots of cold drinks we headed off for some shopping- first to get the paint for the living room, and then to the garden centre as I still had some vouchers from my birthday and wanted to put plants in before it gets too cold.

Then my parents came over- Dad helped me with doing the first coat of paint on the living room walls, and Mum sat outside and read/ chatted to Andy while he was cutting up wood and planting stuff in the garden.

On Tuesday I headed into work first thing as the cleaners do a deep clean over the summer which involves them moving all of the furniture to the middle of the room- I spent a few hours moving back tables, drawer units and cupboards, as well as doing some printing and sorting a few other bits out. 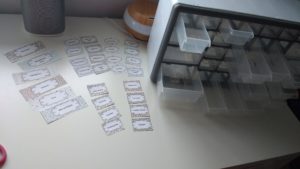 This is one of my little summer projects- I bought a set of drawers (they are sold for screws and things)  and have made labels for all of the bits and bobs like pens, whiteboard pens, blue tac, hairbands- I even have a drawer for my teabags! I attached the labels with little sticky pad things and I am maybe a bit too excited about how neat my desk will look!

After getting home later than planned (closer to 1pm than the 11am I had imagined), I needed to do another coat of paint on the walls. I was supposed to be meeting some friends for a picnic/cake in the afternoon, so I got straight on with it instead of having lunch but painting the walls by myself took a lot longer than the day before when Dad had been helping (or more accurately, when I was helping Dad), and by the time I had finished and messaged them they were going to be leaving (it was a 40 min drive away too)- a shame but we have some other dates to meet up. I had a super quick shower and a change as decorating in the warm weather was very hot work! 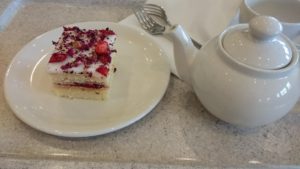 As I’d got straight on with painting I hadn’t eaten lunch, and we had a cake voucher for John Lewis that ran out at the end of August, so we walked into town and shared this strawberry and rose cake. I very much needed the tea at that point too! We also had a look at curtains and rugs, and when I got home I ordered a rug for the living room as I had some vouchers for there too.

On Wednesday I had a bit of touching up of the paint to do- I wanted to get it finished as Andy’s parents were coming over in the evening and we had left the living room with all the sheets covering everything for the past few days as the prep just takes so long. I went on a run first, and then when I got back I needed to wait for the hot water to heat up (we only have a small tank but usually it’s OK as I tend to have a shower in the evenings), I decided to get on with that before a shower.

I had a message saying that the rug was ready to collect, so I drove into town (it’s just over a mile away, so I would usually walk but it was pouring with rain and the rug was heavy).

Later on we finally took away all of the sheets and put the furniture back and the new rug down- I love it! 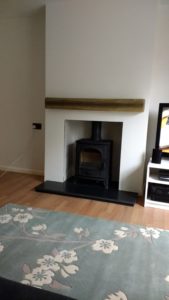 I did a spot of baking in the afternoon- a cherry and almond cake- ready for Andy’s parents in the evening. 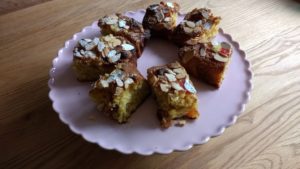 As it was pretty rainy out, I made myself a chai latte with the Bluebird tea sticky chai- I had much more success this time (using some common sense..)- I put the chai into the milk before I heated it, and then strained it into the mug after. It was delicious. I had that while I watched Bake Off (and I do miss Mel and Sue, but Noel and Sandy are funny too, so I think it’s going to be OK!). 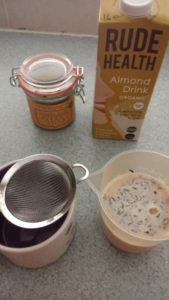 On Thursday I had a run first thing- I thought I needed to do 5 miles to get to the 100 miles, but just in case I went for 6 miles, so instead of the 5 mile loop I did an out and back into the woods- lovely. 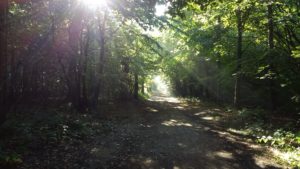 It had rained a lot in the night and the ground was fairly damp in places- it was also a bit misty in places and the light streaming through the gaps in the trees was so gorgeous. 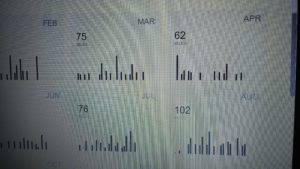 I also found that I could post a sort of update on Strava, so to celebrate my first 100 mile month of 2017 I posted this photo on there.

As well as a bit of admin for work, I got on with a lot of baking, as it was Dad’s 100th parkrun on Saturday! The final list includes white chocolate and macadamia nut cookies, chocolate chip cookies, chocolate orange brownies and a lemon and blueberry cake. I bought some gluten free cookies as I always worry about having trace bits of flour in my kitchen. 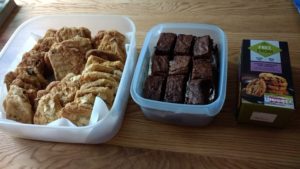 On Friday I was having my hair cut in the morning, so I walked into town and had a bit of a mooch around. I ended up getting a dress in the Fat Face sale and some new work trousers.

After more baking (I made the lemon cake on Friday) I walked around to the amazon locker to pick up an online order- I saw these tins online and thought they would be perfect to store clif bars and also maybe some nice chocolate. 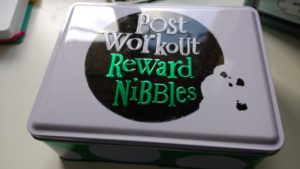 While I was walking back I was listening to a podcast, and it started making a weird beeping noise. I couldn’t work out what it was, and when I got my phone out of my bag it turned out to be my brother ringing me- I’d never had that happen with my headphones in before.

I’ll get to the weekend in another post- but the final week was pretty satisfying with a nice mixture of relaxing and getting things done.

2 thoughts on “Enjoying the final week of the holidays”