So, a bit of a random post coming up!

I’ve not managed to get to a club run in a while. We’ve had half term (I went out in the light in the morning), the next week I got back too late from work so went out on my own. Last week I finished work earlier, and the traffic was awful so I went out on my own (it was nearly light when I left!)- it seems like no-one actually managed to get to the meeting point as traffic was gridlocked, and then this week I was still stiff from the half marathon (plus the run leader wasn’t going to be there) so I just ran into town to get some cash out and then ran home- that was enough. Hopefully next week I’ll get there.

Yoga has been good- last week we focused on twists (we focus on something different each week) and also had a bit of headstand practise- I can now get both knees onto my elbows but the final push to stretch out the legs is so tough (and a weird feeling- it’s hard to work out which muscles need to work when you are up-side down). Josie, the teacher, came over to gently hold my hips to steady me, and then I managed to get both feet up! I didn’t hold it for that long, but it was a great feeling of accomplishment!  I don’r even think I ever managed one when I was a child in my gymnastics club. This week I was feeling grotty (I’ve had a sore throat since Sunday and a stiff neck, and have been losing my voice) and I wasn’t even sure I would go. I am really glad I did- we focused on inversions so it was a little gentler than usual. Although the headstand we did was the other one (with elbows on the floor) so I am much further away  from managing that one.  I felt so much better when I got home- the final relaxation part was bliss, with some geranium oil to help with the focus.

Things are starting to get busier though- we’ve had a few extra staff meetings and this has meant running being pushed to one side (last week I went to a cluster meeting at another school, which was great, but it meant I got home later. I could have gone for a run, but I had work to do and knew that it would just mean a super late night which I didn’t really need). Today I’ve got an extra meeting and then am going out for dinner with friends, so there won’t be time for a run then either. I think as we get closer to December this is going to happen more and more!

After my run on Sunday a few weeks ago I really fancied some salt and vinegar peanuts. When I first heard of these, I thought they sounded horrible. But then, I love vinegar and I love peanuts, so in the end curiosity got the better of me. 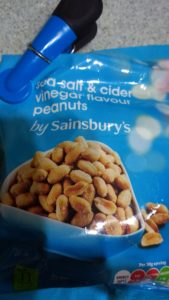 They are so tasty- I don’t think they should work, but they really do. (Not good when you have a sore throat though). 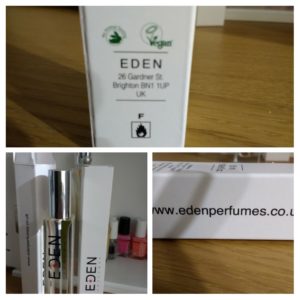 After having my chip scanned at the Brighton and Hove parkrun, I was given a leaflet with discounts by a member of the Vegan Runners club. One of the places on it was Eden, a perfume shop. Now, I do sometimes get perfume from places like Lush or Yves Rocher, but I also do buy the gift sets in the January sales from the normal perfume places. I sort of knew that they might not always contain nice things (I put the thought of actual musk to one side), but I hadn’t given it a lot of thought until then. The shop is pretty amazing- on the wall are mounted loads of bottles- it looks like a bar (click on the link if you are curious as it’s pretty impressive I think). Each bottle has a description of the scent, and they had leaflets telling you “if you like this high street perfume, then choose this number”. I spent ages in there smelling the samples, and then bought a couple.  You choose the size and then you can also have old bottles refilled for less- I think the bottles I got should have been £15 each but with the discount it was £13. I’m a convert anyway, so once my old perfume has been used up I will not be buying more from Boots.

Is life starting to get busy for you? Which combinations of food do you think are wrong but actually work so well? Have you ever thought about what is in you perfume?

2 thoughts on “Bits and bobs and a headstand!”