I’ve done a couple of the parkruns in Brighton before (Hove prom twice, and Preston Park once). Andy (who is turning without being asked into my parkrun tourist planner- he found the hotel near Bushy, and that Andover parkrun was close to our hotel) noticed that Brighton and Hove parkrun is very close to Hove station, so we booked a hotel by Brighton station so it would be easy to get to.

We arrived on Friday night and to save me the stress of the ticket machine in the morning (honestly, why do small things like this make me so stressed? I usually prefer to go to a person because then I know it’s the right ticket…), I bought my tickets the night before (there was an option for “travel tomorrow”), so all I had to do in the morning was get dressed and walk around the corner to the train. I could have run there as it was only a couple of miles, but as we were only there for the day I didn’t want to get back too late. It was £2.80 return so not too bad (I have paid that sort of thing for parking at a parkrun in some places). 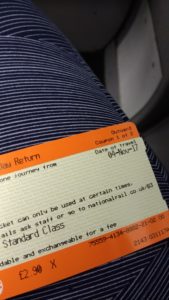 To be extra helpful (or because he knows I am not good at travel, who knows…) Andy had sent me a screen shot of the journey times to and from Hove station- I like to be there early so I got the 8.23 train which arrived in Hove at 8.26- nice and short.

Luckily I left the time because for some reason, even though I had looked at a map, I thought that the parkrun would be closer to the sea than the station, so I knew that as the sea was on my left, I had to head downhill (or left). I had maps out on my phone with the pin in the centre of the park, and I couldn’t work out why I was getting further away. After realising I was going the wrong way, I headed back up the hill to the station, but then the map wouldn’t spin around so left on the map was right in real life so I got confused again. It turned out that there was a pedestrian bridge over the railway tracks, and once I had done that, it was an easy run up the hill to the end of the road, left at the end and the park was in sight. 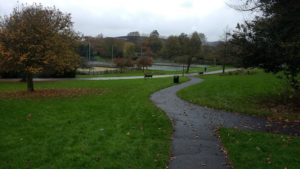 It was a bit damp, but the forecast rain hadn’t materialised yet. I could see a bunch of high viz people in the centre, so I headed over. It happened to be their 10th anniversary, so some people were dressed up. The RD called out for any new runners to head over to “the red vicar”- I think he was dressed as a cardinal? Anyway, the briefing was amusing (he checked we had our barcodes, then that we had the fiver for him….)- and then it was time for the run briefing. Now, usually everyone listens carefully during this, and I feel that not only is it polite to do so, but imperative, because sometimes there are changes to the course or safety information to share.  There were a lot of people there (461 runners), but I could not hear a word, so many people were talking. I was quite annoyed and found it really rude. The team give up their time so that people can enjoy a free and timed 5k, so the least you can do it be quiet for a few minutes during the briefing.  There were pacers and they waved their little flag things about- I was near the 30 minute one at the start (but again you couldn’t hear at all).

Once we started it was enjoyable- it sounds complicated but you start a little bit before the finish, doing one small lap and then two big laps. There is a little incline on each lap, but nothing too steep and then you have a nice long downhill at the end of each lap too.  I try to make a point of thanking each marshal as I run past- I really appreciate them giving up their time to marshal, and I know that when I have marshaled it is lovely having the runners show their appreciation. One of the things I love about parkrun is hearing the call of “thank you marshal” echoing through the park. But I did not hear a single thank you from anyone else. Do people not do that at every parkrun?

There were two ladies talking loudly at the start, and on the second lap I caught up with them- they were talking about a friend of theirs who does Good Gym, and one of them said “I’m too selfish to give up my time to dig up a garden” and I did think to myself “and too selfish to listen to the run briefing”…

Anyway, I enjoyed the run and I think on the first little lap I caught up with the 30 min pacer, and then on the second lap I caught up with the next one (I can’t remember the number though- 29 or 28 mins possibly). I managed to push the pace on the final lap, doing a nice negative split with 27.43 (9.13, 8.37, 8.33 and 7.21 for the little bit- not the easiest to do on not a flat course).  The best thing about lapped courses is that you get top 3 personal records on all the strava segments! 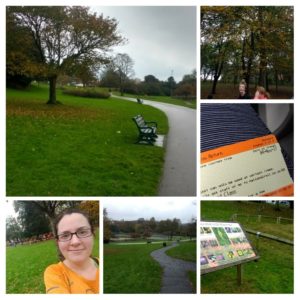 It had started to rain quite heavily on the final lap, so I didn’t hang around at all- I took a few photos on my run back to the station. I was about to miss a train, but it was delayed by a few minutes so I still managed to catch it. By 10 o’clock I was sat in Cafe Coho- there was a lovely hot cup of Earl grey tea waiting for me, and the pancakes weren’t far behind! 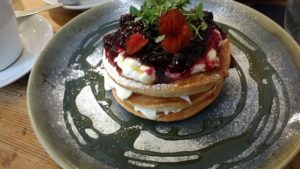 So another enjoyable Brighton parkrun (Bevendean Down parkrun is the one yet to visit, although that is a bit out of town so I am not sure I’d manage it without a car). I think probably Hove Prom is the easiest one for me to visit, but when it’s super windy it is nicer to head inland.

Have you collected any parkrun “sets?” Do you find train travel a bit stressful? I enjoy it once I am on the train, and I don’t mind if there are frequent trains so if I miss one it’s fine, but buying the correct ticket and getting to the right platform adds to the pressure a bit. Do people thank the marshals as they run past at your local parkruns?  Maybe it was too cold and rainy…

2 thoughts on “Brighton and Hove parkrun”