So as I mentioned in my last post, I was feeling a bit tired and under the weather- a sore throat and general achy bits. I was going to volunteer at the Hatfield 5 race on Sunday, but I didn’t want to sign up and then not make it, so I decided to err on the side of caution. I’ve moved the diffuser into the bedroom and have been adding some eucalyptus and peppermint oil to it to help with breathing overnight (you can put it on for 1, 3 or 6 hours but it cuts off when it runs out of water).

I had a meal out with friends on Thursday (which was lovely, and probably better for me than having a run after work, but did mean a late night) and straight away noticed banana and nutella mini calzone on the dessert menu (plus any hot drink), so I decided to have a small pizza with salad to save space for them. 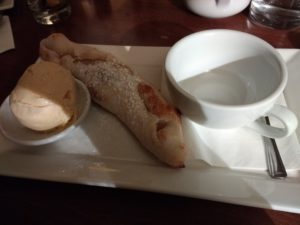 Well, when it came, it was massive! I know it isn’t the size of a calzone you would have for dinner, but still. It also came with ice cream (I don’t remember reading that, but maybe it was on the menu), and I had a peppermint tea too- a very delicious end to the meal.

On Friday I was still feeling pretty tired, and decided that running parkrun may not be sensible. I quite fancied tail walking, so I looked around at the local ones and found that Westmill had hardly any volunteers and no tail walkers. I emailed them first thing, but didn’t hear back. Later they put a plea on facebook- I told them that I had emailed to tail walk, but by then they had filled the slot, and they asked me to marshal. Although I fancied walking at the back, or gentle jogging, the guilt got the better of me and I agreed. 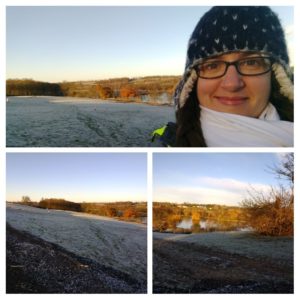 It was freezing! But so pretty with the frost all over the fields and trees, and the ponds frozen solid. I’d only run it once before (it’s fairly new) and I did worry a bit about being sent to a marshal spot somewhere and getting lost but thankfully they gave me a spot by the car park.  It meant I could hang around the start area and chat to people as they came. I ended up chatting to a couple of tourists from Stevenage that had relocated from Milton Keynes- it was good as they had been to quite a few parkruns that I had also been to, so we could compare notes. They reminded me about the Letchworth parkrun coming next year- I’ll need to run it to keep my made up Queen of Herts status! After they headed off to the start, I took a few more photos and stamped my feet to try and keep warm.  Basically, the course is just under two laps- the runners meet at the finish for the new run briefing, and then walk up the track to the start. They then complete one lap, running past the finish, up past me where I directed them back towards the start to begin their second lap.  There were only 49 runners (it’s a small parkrun generally and I think the cold weather kept people away) but all were so friendly, thanking me on their way up the long hill. The tail walker went past just as the first runner finished, so I wandered down to the finish area for a bit and then as I could not feel my toes, headed back to the car.

After breakfast we walked the long way into town (to walk in and home is about 3 miles, but we walked 3 miles to town, then around and then home, so probably more like 5 or 6 miles). I picked up a Starbucks free drink (green tea latte this week), and after lunch we spent about two hours raking up leaves and filling the compost bins, garden waste bin and several sacks – the snowdrift of laves behind our cars were even bigger! Once it got dark I went inside and made a pumpkin pie for Sunday tea.

In the evening we went to see Paddington 2, which I totally loved. I was feeling a bit rubbish though- quite cold and sat under my coat the whole time.

I felt a bit groggy when I woke up on Sunday and felt like I really needed some fresh air to clear my head.  I thought I would just head into town do a small loop and come home. 4 miles took me 50 mins (lots of stopping to wipe my nose)- the pavements were so frosty and I could see footprints in the frost. 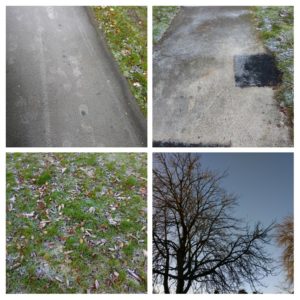 After breakfast we walked into town a different way, got a clementine hot chocolate from Caffe Nero to share for the walk home (so tasty), and stopped off in Morrison’s to get some sugar as I was going to make some marmalade. 6 miles walked – not bad! 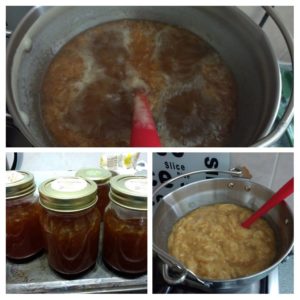 Last year for Christmas I was given a kit to make marmalade- a tin of lemon peel and things, and some jam jars. I decided after seeing Paddington that the time was now to make it. I’ve added in some chopped crystallised ginger to make lemon and ginger marmalade- hopefully it will be good (it smells lovely). 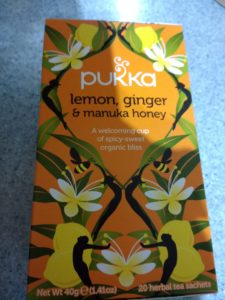 To try and clear my cold away I’ve been having lots of this tea- it is so lovely.

How do you get over a cold? I know that resting is good, but also fresh air really seems to help but sometimes it’s hard to find the balance and you only realise too late that you’ve tired yourself out too much. Do you enjoy marshalling at parkrun (or races?)? I find it quite fun cheering everyone on, but I would rather do it in the summer when it’s too hot to run.