First of all, thanks for all the lovely comments on my last post about the Cambridge half. I’ve not done a race for a while (as the lovely festive five was cancelled due to snow) and it was nice to carry the post-race feel into the week.

My legs did take a while to recover, and I felt really tired all through the week. I wasn’t going to be back in time for our club run on Tuesday (and I felt pretty stiff still) so I met Andy in town and we tried the new Starbucks rooibos tea lattes- I’d had a normal one in South Africa so I went for the red apple one, which I actually quite liked although it is fairly sweet. The chai latte is still king. I did a fair bit of foam rolling, and of course walking around helped too.

On Wednesday yoga was just what I needed, with a focus of twists and back bends- I felt so much better after.

On Thursday I actually managed a run- it’s been weeks since I’ve managed one on a Thursday for one reason or another. I wasn’t home particularly early and I still felt so tired so I did just over 3 miles (I have a bit of a mental block where I don’t want to run for less time than it takes me to wash my hair after, so 3 miles is normally my lower limit).

On Friday I had booked a shoulder and back massage- I find these really help with my lower back too as I have had issues with it before, and having fairly regular massages (and I am sure yoga) has helped loads. The masseuse kept apologising to me as she kept finding huge knots- I normally have a few as she will mention it to me after and check I am OK, so it had to be bad for her to talk to me about it during the massage! 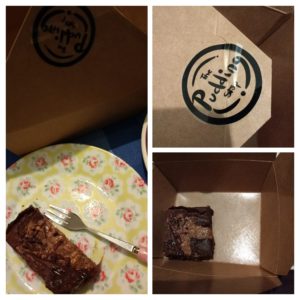 The other bonus of booking a massage is that it’s in St Albans, so I am just around the corner from The Pudding Stop. I hadn’t done any baking and so I treated us to the peanut butter and salted caramel brownie- honestly it’s just divine (we shared it because they are massive).

On Friday I was still feeling tired, but I wanted to go to parkrun as the memorial for Taff, the runner who had passed away, had been put back to this week (as last week was cancelled due to the snow). I checked the roster and they still had one marshal gap, and as I was meant to marshal last weekend when it was cancelled I felt like I owed them one, so I messaged Carrie (our run leader and the RD for that day)- she was happy to have another volunteer. 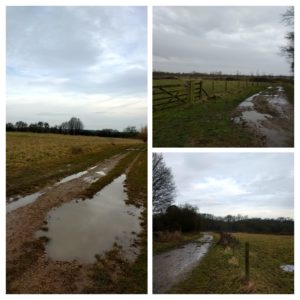 I had worn wellies so when I got there and was told I was at “the boggy bit” I was very glad of my preparation! It was so wet and muddy everywhere, but I was by the bit where the course goes around a right angled corner and then down a narrow, rutted path (I actually fell over there during a Sweatshop run and badly banged my head and cut up my shoulder- I still have a big scar there)- so a marshal to shout warnings to the runners was much needed. 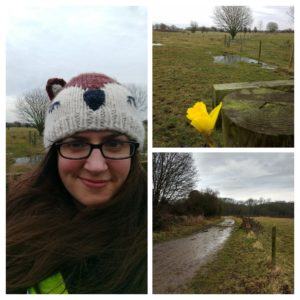 I nearly didn’t bring a hat but it was pretty windy out there (I was trying to show it in the pic with my hair going everywhere)- I only grabbed it at the last minute. We were all given daffodils to put out on the course, as the runner was Welsh. My marshal point was probably less than a km from the start as the crow flies, and I could hear the clapping at the start (they did a speech and applause for him). My point was around 3.5km in, so I had a while to wait, and I did think for a while about him. I didn’t know him well, but at the parkrun volunteer evening last year I spoke to him for ages about his life and how he got into running, and he was just so friendly towards everyone. Sometimes if I got to parkrun early I would head off on a short warm up run around the housing estate nearby, and he would jog up from where he lived, so if we crossed paths he would run the rest of the way with me (once I had run past in the other direction as I wanted to run to the roundabout and back, and I didn’t realise until I turned around that he was waiting for me to run back). The last time this happened was only a month or so ago- he was training for the London marathon so I was hearing about how his long runs were going.  It was good to have time on my own to reflect- something about being out in nature, and also out at a parkrun (which he loved) felt like time well spent.

Anyway, back to the parkrun. The photographer position was empty on the roster too (they don’t tend to have someone each week) so I got my phone out and decided to try and photograph everyone as they ran past. I was having to call out warnings as it was slippery, so I wasn’t looking at my phone screen at all. Within the first 10 people, 2 had already slipped but they called out to say they were fine when I shouted after them- they were just covered in mud. 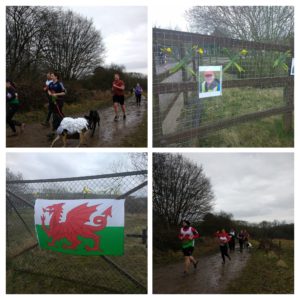 A few runners had worn Welsh flags or colours, and that dog covered in cotton wool is apparently dressed as a sheep. The finish area was decorated with photos, flags and daffodils.

It didn’t feel like long before the tail walker came through, although this was probably around 9.45. I walked through a shortcut to the finish with another marshal- he’d seen a walker slip down and scrape her face on the barbed wire fencing that she was holding on to, but he’d spoken to her and she said she was OK to finish, so he’d rang the RD to warn them to get the first aid kit ready.

The rest of Saturday was spent walking to Aldi (it’s not far from the parking at parkrun), getting on with a load of work, walking into town to stretch the legs, and then more work, finishing at around 7pm.

On Sunday I had planned a 5 mile run, but as is the way at the moment, it turned out to be 6.5 miles. I just can’t seem to remember routes, or add segments together to work out the total distance. 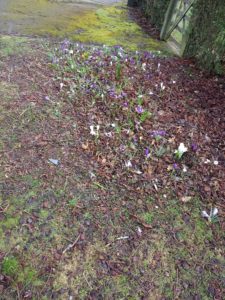 I only needed a t-shirt and although it was cold (I could see my breath) it felt like spring was on the way- loads of crocuses poking through. 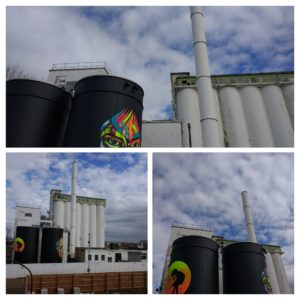 On our walk back from town on Saturday we saw people painting these cool murals on the factory, and they were finished on Sunday morning. I have no idea if they are keeping them or it’s just to look interesting while all the building work is going on. 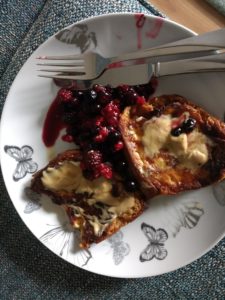 I had a lovely breakfast of panettone French toast with some maple butter and summer berries (Aldi do some lovely frozen mango, which I’d gone to buy, and then saw the summer fruits which was blackberries, raspberries, blackcurrants and redcurrants- nice and tart), and then we were off to the cinema. We’d booked an 11.30 showing of Red Sparrow. Let’s just say it wasn’t the most cheerful of films, and some of the more gory scenes meant I had to close my eyes and block my ears!

We spent the rest of the day at mine and then Andy’s parents, all very relaxing.

Did you have a good weekend?

4 thoughts on “Marshalling and memories”