Last Monday I had to head out pretty quikly after getting home from work, as I was off to the second Hertfordshire parkrun Celebration of Volunteers. 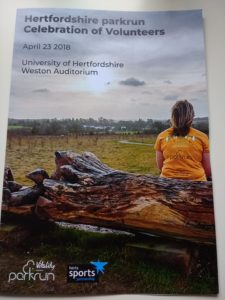 It was a free event held at the uni in Hatfield, and anyone who has ever volunteered (or who is interested in volunteering I think) could get a ticket and attend. The evening began in an atrium, with the St Albans parkrun band playing and a buffet available (although I’d had dinner and only just got there in time so didn’t have any of that), and then we all went into the auditorium for some talks and presentations. While we all filed in, there was a photo montage by Bruce Li (he seems to be a sort of unofficial parkrun photographer – he was the one at Northala Fields the other week, and I noticed that he was credited in this article about how parkrun makes you happier)- he takes fantastic photos of people running, laughing, smiling, and just captures the spirit of parkrun perfectly. 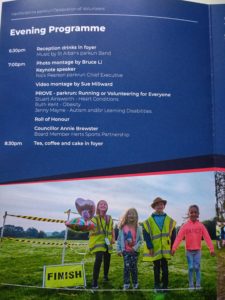 There was a talk from Nick Pearson, the chief executive of parkrun. He was interesting as he talked a lot about the change of direction for parkrun- it used to be more about having parkruns where people wanted them, and now they are trying to help create a happier, healthier planet so they need to try and target areas and groups where people are less active. He took a few questions from the audience too. 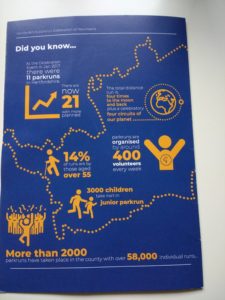 I liked the facts on the back of the flyer- last January (the last evening for parkrun in Herts) there were 11 parkruns in Hertfordshire and now there are 21, and apparently with more planned (athough I didn’t find out where just yet- I’ll need to visit them to keep my Queen of Herts status). 3000 children take part in junior parkruns which is fantastic as they are all relatively new ones. 14% of runs are by people aged over 55.

Later there were talks from people about project PROVE. One guy talked about his experience with heart disease (he was a runner, and had a check up and was told that he had had a heart attack but didn’t realise), and was now supporting others with heart disease to take part in parkrun. One woman talked about trying to encourage obese people to take part (and they praised Bruce Li here for taking positive pictures of overweight people instead of the usual media focus of people eating pies or sitting on a sofa). Sadly a lot of people would register but not go, or drive to a parkrun further away so they would not bump into anyone they knew. The final woman talked about supporting people with learning difficulties and/or autism. What I thought was poignant here was that you cannot always see a disability, so if someone behaves in a certain way (refusing to take a finish token) don’t assume they are just being awkward. They had all set up facebook groups and Strava groups for people to join, and had recommended things like speaking to the event team beforehand so they could support in any way. You can find all of the various support groups (for example the facebook groups) here.

After that, awards were given out to the parkrun teams, before we headed back into the foyer for tea/coffee and cake (of course). It was such an interesting evening, and just reminded me how brilliant parkrun is.

What do you think puts people off going to a parkrun?