After parkrun on Saturday I went back to my parents house for pancakes. Once we had finished breakfast, we headed into the garden to have a look at some plants that mum has been growing for us in the greenhouse. As we went outside, we could hear some chirping from one of their bird boxes, and then we saw a great tit flying in and out of the box- the chirping got so loud each time the bird came back.

We moved away a little, and then while we were watching that we saw two red kites courting (is it called that? sort of flying into each other and then away), and then a buzzard really low, being chased away by two jackdaws- it was all go!

When I got home I was so chuffed to see a goldfinch on the nyjer seeds- I’ve only seen them being eaten a handful of times, but it seems at long last that the finches have learnt that there is food here, as I’ve seen one or two every day for the past week, sometimes for a good ten minutes at a time.

Any had been busy cutting up the final pile of wood and moving it off the circle of paving slabs in the middle of the lawn, and then he’d moved some plant pots onto it- it has made a huge difference. 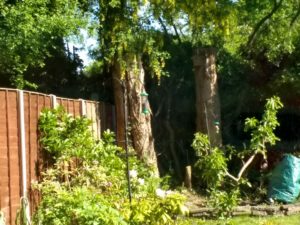 We headed off to the garden centre, thinking it might be empty (according to Andy, people that like garden centres probably like the royal wedding, so it would be emptier than usual, but of course ignoring the fact that we like garden centres and not the royal wedding….)- anyway, we have been planning a garden project for a while so wanted to get a few plants to add to the project. I then had a few hours of work to do before the day was out, so we left the actual garden work until Sunday.

On Sunday I went out on a lovely run- in the end I did 9.5 miles and although it was warm, there was a light breeze which really helped. 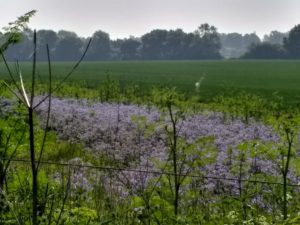 I passed this field with an amazing streak of purple flowers in it- I could not work out what they were as I couldn’t get close enough, but it looked so pretty.

Once home, I quickly had a shower and breakfast as it was time to get on with the garden project. We went to B&Q to get some soil and trellises, and then did a few hours of work but it got so hot, so we had a break and headed into town to get a few bits (and use my Starbucks free drink voucher) and then went back into the garden once it was a bit cooler- we didn’t stop until 7pm when we were both totally shattered. 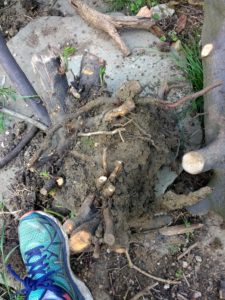 It doesn’t look so big here, but this is the root that he finally dug up- it left a bit of a crater!

My parents had given me a pot with an olive tree, buddleia and foxglove growing in it- they wanted the pot but not the plants so I divided that up and planted them (which involved poor Andy digging holes in very solid ground). We filled in the big hole left when he finally dug out a huge tree root, and then added loads of plants including a little fig tree, lavender grown by my mum and a few plants we bought on Saturday. The tulips and winter pansies in the pots had finished flowering so we dug those into the ground. Mum had given us a load of bedding plants so we planted them around the garden and in a few of the pots- I’ve put some in the stump of the willow tree as it’s a u-shape so I thought that might look good (at the foot of the bird bath). 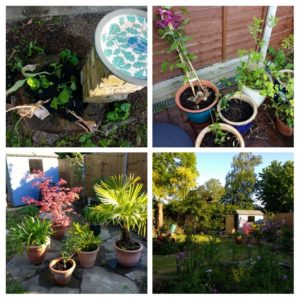 Clockwise from top right- geraniums in the willow tree stump, patio pots ready for the trellis, view from the living room, pots moved to the middle of the lawn. 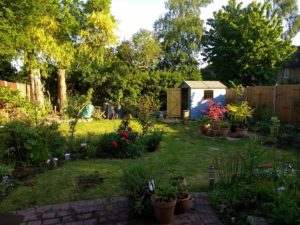 I’d been given lots of garden things this year including a little ladybird, thermometer and bird box, so we put those up. 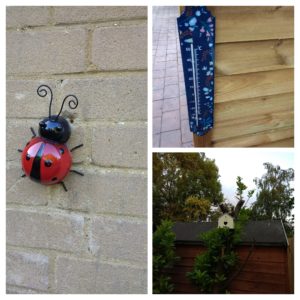 As well as a load of weeding, we also got on with the garden project of putting up the trellis (although we finished that on Monday night) and planting out some climbers in pots so they will cover the wall. 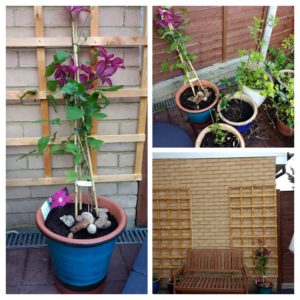 The plan is to fix the mirror above the bench- we are nearly finished!

On Monday we finished some of the bits off, and had a nice walk in the sunshine in the evening. I started sneezing a bit on Monday afternoon, and on Tuesday was feeling a bit more cold-like. I was OK at work so decided to have a gentle run on my own instead of going to the club run, which I think helped to clear away the cobwebs in a way. When I got home, I made a drink (iced tea with some of the salt drops) and then sat on the bench in the garden and enjoyed it- we definitely need to sort out the ratio of working in the garden to actually just using it.

Do you like gardening? I find it very satisfying seeing all the changes. Do you have much wildlife where you live? The fox cubs have been back in our garden which is always lovely to see.

6 thoughts on “Working in the garden and lots of nature”