I’ll get to the rest of Copenhagen in another post (we arrived early on Friday morning and came back on Sunday). We stayed a few metro stops from the city centre (the Crowne Plaze Towers hotel opposite Ørestad station and right by the huge Field’s shopping mall), handily placed around 3km from the start of Amager Fælled parkrun.  The directions looked fairly simple as all I had to do was either run up the straight road and then turn left into the park, or get off at the university metro stop and head into the park.

(Our hotel was by the mall on the map so you can see it looked relatively simple). It was super hot so in the end I decided to get the metro, although this added to the stress a bit (not because of navigating the metro, as that was super simple with either a north or south-going metro, every 5 or so minutes) but because my phone was playing up and not always unlocking and the metro ticket was a 48 hour pass purchased online, so if I had been asked for a ticket I would have needed to show the text message.

Anyway, I thought I had prepared well, by emailing myself a link to the map (on the parkrun course page, if you look at the map, you can select the “share” icon and email it to yourself, which means when you then open the map via the link on your phone, both the  parkrun route and your location show up), but my phone then started zooming out so much that I could see the whole of Europe on my screen- argh! I’d read that it was very much a last-minute parkrun, in that people would appear at 8.55 and set it up. Fine, but if I was in the wrong part of the park that  would be no good. It wasn’t a flat grassy park where you could see across, it was full of bushes and trees, with paths between them, meaning no last minute dashes across to the right place. 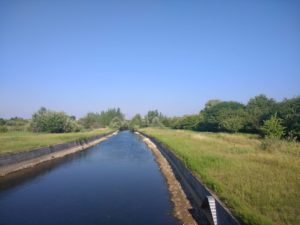 The entrance to the park

Thankfully as I was wandering in, clearly looking confused and probably talking to myself, a runner overtook me, turned and saw my top, and pointed the way for me. I waved a thanks to her, as she then turned off left, but had indicated that I needed to go straight on. A little later I came across a cross-roads of paths, and could not decide (and again the phone wasn’t working), but after seeing a few people up ahead decided to go that way. As I got closer to the group of people, one person came up to me (seeing my parkrun apricot top I suppose) and asked me if this was where it started.  I admitted that I didn’t know, and she told me it was a lot of English tourists plus some locals that were new to parkrun, so no-one knew so far where the start was. Fingers crossed we were in the right place! At around 8.50 the crowd of people moved a little further down the track to a clearing, where someone got out a tarp (for water bottles etc) and someone else put down cones for the finish funnel- phew! 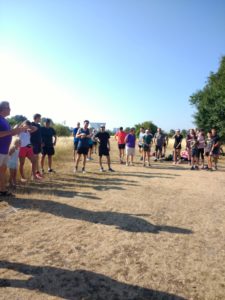 The briefing at the start

The run briefing began in Danish, and seeing as all I can remember from my time in Denmark was how to count to ten, I worked out the 5k, 2 laps part, and then there were some claps (someone waved so we knew that was a milestone of some sort). A guy sidled over and said to me and someone else that he would translate for us if they said anything important, but then the guy doing the briefing switched to English and said “any tourists here today? From England?” Lots of people put their hands up, and then one lady said she was from Australia. “You win” he told her. He explained that there would not be marshals out on the course, but it was signposted and you could just follow the person in front. He then quickly ran through the route, told us it was the first parkrun outside of the UK and was coming up to being 10 years old, before showing us to the start line (back along the path where we first waited). A line had been created (it looked like flour) on the floor to show the start line, and then it was a quick countdown and we were off. 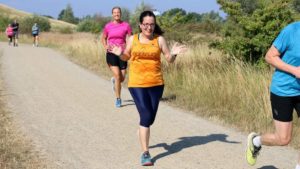 From their facebook page- one of the volunteers must know a short cut as he was waiting on the first lap with his camera taking pictures of everyone.

It was absolutely baking. On Friday the temperature had got to over 30C, and the Saturday was meant to peak at 29, but there was little shade and a breeze only appeared in a couple of places.

I had seen on the results that it was a fairly speedy one, with final finishers coming in before 40 minutes, and I think I tried to keep up with the pack at first but it soon thinned out and I ended up mainly by myself. I ran behind this guy in the blue top (you can see a bit of him in the photo) and it had 50 and the parkrun logo on it. I wondered for a while if the milestone tops were a different colour in Denmark, and then realised that it seemed the same shade as the 500 top, so perhaps one of the 0’s came off. However when I looked at the results there was no-one with that many runs (438 was the highest I found) so I am not sure. Any ideas? 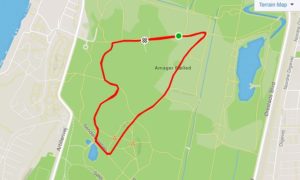 I enjoyed running the route- every now and then you had to look out for arrows on the floor and at one point during the second lap (when we were all further apart) I did wonder if I had missed an arrow, but then I noticed the fenced off field and remembered running by it before. When I ran past the start/finish area on my first lap, there were loads of people cheering (RD/ timer/ scanners etc)- they had these little hand held clapper things and were cheering in both English and Danish, including the lovely but very not true chant of “you look beautiful”. 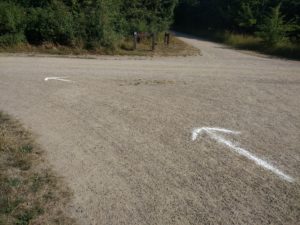 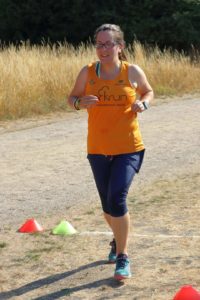 I was so hot by the end- my face seems to radiate the heat- so I wasn’t really putting in a fast finish. It was one of my highest placings though (47/67 runners- it was my 6th best finishing position). As soon as I finished I got my barcode scanned. The lady told me she was very happy that my wrist band scanned, and I told her I had a backup on me too. She showed me a notepad, and explained that they were ready for anything. As I stood in the shade to cool down, she was writing down the barcode for someone who had it up on their phone (DFYB people). 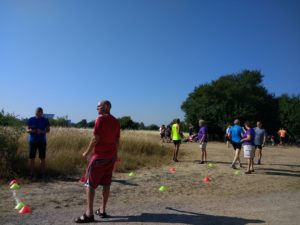 Although there was no cafe nearby, people were hanging around, sitting in the small patches of shade and cheering everyone else in. I chatted briefly to the lady who came up to me at the start (and her husband)- they were from Cumbria and here on holiday. I was surprised to see in the results that they had only done a couple of parkruns before this one as when I was chatting to the lady she was raving about how brilliant parkrun was (I’m not saying you can’t love it from the start, but seeking one out on holiday seems like something you would do once Saturday morning is always a parkrunday for you). 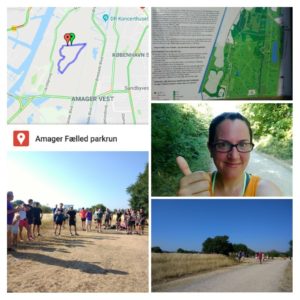 Anyway, I was hot and thirsty so I headed back to the metro, getting back to the hotel for about 10am. I had lots of water and a cool shower and then we headed to the shopping centre to get a cinnamon roll for breakfast- what else can you do in Denmark? 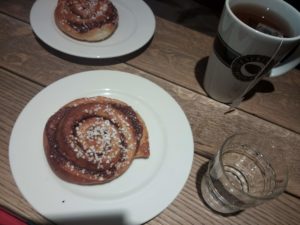 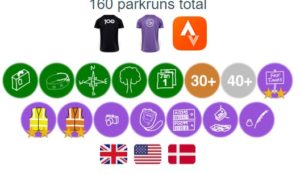 I do like the badges on the tourist running challenges– now I have a new flag!

Where would your ideal parkrun holiday be?  They are in so many countries now- how about Germany combined with a Christmas market trip? Or they posted about a potential NYD double with Copenhagen and then Malmo…