I wrote this last weekend before everything started shutting down…

Irchester Country parkrun was probably Plan C for the weekend. Originally we were going to Norwich for the weekend as Andy had tickets for the match (Southampton were playing there), so I was going to head to a parkrun near Norwich. I’d had a conversation with my dad, and as he had football tickets too (to Watford) he’d said he would go to Ellenbrook Fields (Jersey Farm is off for the next few weeks to allow the paths to recover) so he could get back in time.

Then the football was called off, so a weekend at home beckoned.  I fancied some tourism but knew Dad needed to be home early, and then realised that he didn’t, because his football was also called off. Quite late on Friday I persuaded him to go with me to Irchester Country parkun, as I have been trying to tick off my alphabet for ages now, and it is just about within touring range. I wrote down the directions and saw about the £1 for parking, but that was about it for prep! 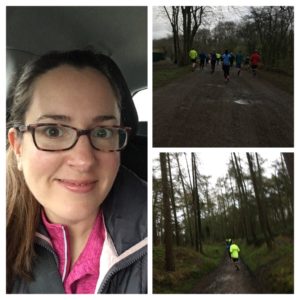 I got to Dad’s at around 7.30, and then he drove us the rest of the way (in his electric car so we are minimising our tourism impact!).

We parked up at around 8.45, paid the £1 for parking and then followed the stream of people down the hill to the start. It seemed like such a lovely park, but no time to look around, because as we got to the start area we realised the new runner briefing was already going on. Thankfully the course was simple (out, 1km loop and then back) so it was fairly quick to understand. There were loads of new runners, and we heard in the main briefing that there was a 5k graduation for Running Buddies (hence all the first timers).

After waiting for a few people heading up to the start area (the same thing happens at Ellenbrook) we were off. Dad was running ahead, and so I just enjoyed being out in the woods. The country park is so pretty- loads of huge trees and so many paths through the woods. The route seemed to go gently uphill for a bit, with smaller steeper sections (but nothing terrible) in the loop. There were loads of marshals and they were all very cheerful and enthusiastic. On the way back, there were people heading out in the other direction and that is always fun as you can cheer each other on. 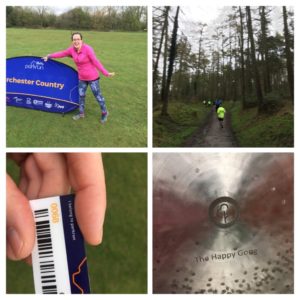 The final part was gently downhill so made for a strong finish. After scanning we heard someone bang the gong so went to have a look – it even had the parkrun symbol in the middle. We were trying (and failing) to get a selfie with the gong in the background, and someone offered to take our photo. I recognised her, and she turned out to be Liz, a bit of a parkrun uber tourist who I’ve bumped into a few times (including at Heartwood Forest) and follow on Strava. As we were chatting I suddenly recognised Mary as the RD, and she had come over. It was lovely to chat in real life, and had I been more organised I would have looked on the volunteer roster to see, as I knew she had worked to set it up.  I then saw the parkrun sign, and decided that a photo in front of it would commemorate the occasion properly- UK parkrun alphabet complete, now all I need is a Z!  (I need another I for my name badge though!) We drove back home where Mum cooked us pancakes. I had offered to go straight home as I am a bit worried about my mum getting the virus (she ticks a few of the at risk boxes) but she was OK with me coming over, so we made sure to stay a long way apart. (Added later- my parents are now isolating themselves so my brother is living with us as he still has to go to work).

Not sure when the Z will happen, especially with all the parkrun countries being cancelled due to the virus. We were looking at booking the Eurostar for the Easter holidays so I could do Zuiderpark (in The Hague- meant to start at the end of March) but I don’t think that will be happening any time soon.

If you need an I, or are fairly near then I would say head to this parkrun – three laps of a cricket pitch/football fields is still a good parkrun, but I am a sucker for one laps, and getting out into the woods just feels so good for the mind.

Are you chasing any challenges at the moment?

And what do other people do on a Saturday morning?