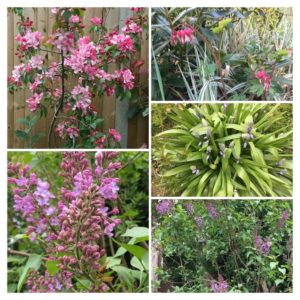 After the long Bank Holiday weekend, Andy was back to work (at home) and I was into my second week of holidays, and how strange it was.

I did some yoga on Monday and Friday, had a zoom yoga class on Wednesday and then went on runs on Tuesday, Wednesday and Thursday. 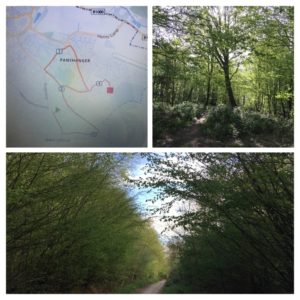 On Tuesday I was going to do a 10k for the Brooks run happy at home medal, as last week I did 6 miles and then found out about the medals (they are virtual ones, but still I was close!). Anyway with my watch every now and then I miss starting it- sometimes it seems I need to press the button twice, and sometimes three times. I was about 4 miles into my run when I first glanced at my watch, only to see it hadn’t tracked any of it! So annoying! At least you can manually add to Strava!

That meant on Wednesday I decided to do another 10k, so I could actually get the medal! It was an email from parkrun I think (if you are interested) and the theme of the medal is different each week, but I think they start at 1 mile- you just upload a screenshot of your run as proof and they email it through. 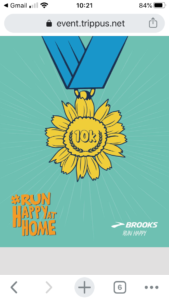 On Thursday I did a slightly shorter run to the golf course and back. 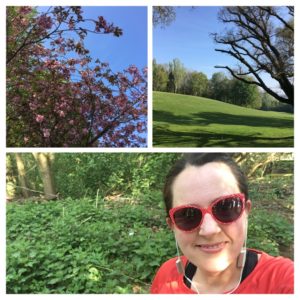 I really like the routine of going out first thing, and it’s still been fairly quiet which is good.

I’ve still been baking, but I was close to disaster with a pizza the other day. 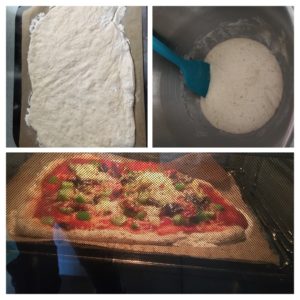 It was my first time using the sourdough starter in the base, and that seemed to go well, although it is much stickier and harder to roll out. Anyway, I’d put the toppings on and put it in the oven, and then as I looked I realised that the tray wasn’t flat, and the pizza had begun to slide off the back of the tray! I grabbed some BBQ tongs and managed to pull it back. I think when I cleaned the oven the other day, I put the trays back in upside down, so the lip that would usually stop the tray was on the bottom. Oops.

I’ve been getting lots of jobs done around the house and in the garden- yet more decorating (it feels never ending! But the walls in our hall were so uneven when we took the wallpaper down, so we have been sanding, washing and then painting them with white as a base coat to even them up. So one day I did the second coat upstairs, another day downstairs. I also managed to finally get all of the wallpaper out from behind the radiator which is the most satisfying thing.). Lots of planting- I found my tin of seeds so just went through them and planted lots-flowers like sunflowers and poppy seeds, and then courgettes, sweetcorn and pumpkin. 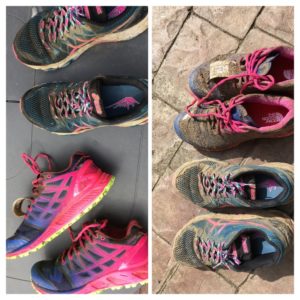 I washed my trail shoes- I think the last time I wore them was the time I was tail walker at Jersey Farm and basically waded through a small river the entire time! I never know why they are such pretty colours though, because they are only going to be covered in mud again the next time they are worn.

As well as gardening, I’ve been making sure I actually spend time enjoying the garden, so if I have a cup of tea then I’ve sat outside and listened to the birds. There are so many coming into our garden right now, and it’s just so calming. 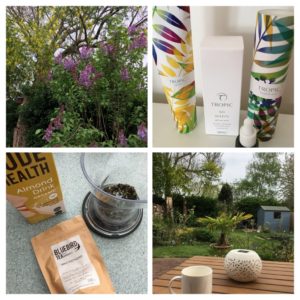 Lovely lilac, my Tropic parcel finally out of quarantine, making cold brewed tea and sitting in the garden

I’ve been experimenting with cold brewing tea, and as I won’t be getting an iced chai from Starbucks any time soon, I have been making a few using milk- basically put a tsp tea in some milk and leave it in the fridge for a few hours, before straining and enjoying. I have loved B&B Carrot cake tea cold brewed in almond milk (it’s rooibos tea with hazelnuts and carrots and is divine) and then B&B pistachio and mint (black tea) also in almond milk which tasted a lot like melted mint choc chip ice cream. 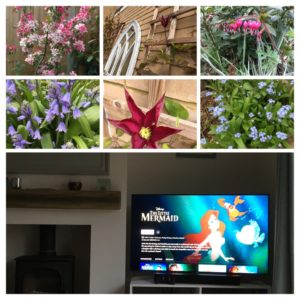 Disney+ is also helping to keep me feeling cheerful. 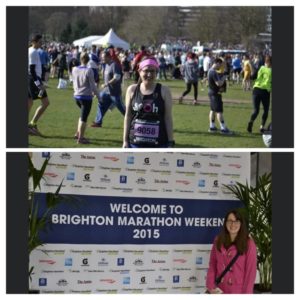 Finally it came up in my photo memories this week that 5 years ago I was down in Brighton (I love going to Brighton) running the marathon.

I had run one marathon before (Stockholm) but I wasn’t feeling great and it turned out I needed an operation, so I had always felt I had a bit of unfinished business with doing a marathon as I felt I was capable of running under 5 hours but hadn’t managed it in Stockholm. Anyway, it was a very warm day but I really loved the race (apart from the tough bit between 20-23 miles, as you started an out and back bit, so could see people on the other side who only had 3 miles to go, whereas you still had 6). We had gone down for the weekend, and my parents came down for the day, meeting up with Andy while he was watching. The picture of me waving below is when I saw them in the crowd- honestly it makes me emotional when I think about it now because I was so happy. This was around 25 miles I think, so the finish line was nearly in sight, and I knew that even if I walked I could make the sub 5 hour target, and I saw Andy with my parents and they all looked so happy to see me, and it just gave me such a boost. 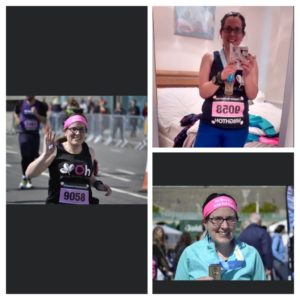 When I finished we met on the beach and then walked back to the flat we were staying in so I could have a quick shower and change before going out for dinner. It was then I realised I had not put suncream on my legs (I had on my face and arms and shoulders- no idea why I left them out)- the shower really stung! We wandered into Brighton after and went to Bill’s for a late lunch/early dinner, and then my parents headed home and we went back to the flat. My Dad in particular had absolutely loved cheering on all the runners, and the race atmosphere, and was quite carried away with it all (in a good way). I loved it so much, although I’ve not been tempted to run the Brighton marathon again because I have such happy memories so I would not want to try again in case it doesn’t live up to it.

So while things like this can’t happen at the moment, I am thankful that I have these lovely memories that I can look back on.