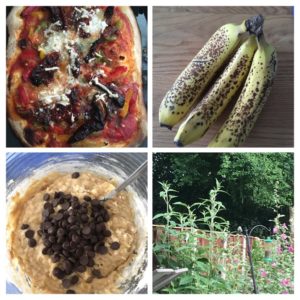 I made pizza one day (using the sourdough starter) and banana bread another day because what else do you do with three brown bananas?

My eye pillow came in handy for yoga. 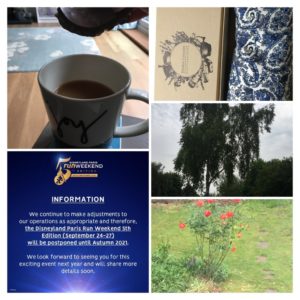 Sadly Disneyland Paris announced that the half marathon weekend in September has been cancelled. We had worked out the logistics so that I could do the 10k and half – Andy was going to get the Eurostar on Friday morning and collect the bibs (as you have to get them the day before), then after work on Friday I would get the Eurostar, we’d be there for the weekend and travel home on the Sunday afternoon. We still have the train booked, so we are not sure if we will still go (apparently they are opening on 15th July), but we can’t get a refund for the train so we may as well wait and see.

We had booked a weekend in Helsinki for the end of July, but we got a refund on the flights this week as they have cancelled most of the flights each day. It’s disappointing but I am not sure I want to go on a plane anytime soon, and things might not be open anyway so it would not be like a normal weekend away.

Our Studio Ghibli show was postponed to August 2021, and our Ash concert (originally put back from March to September) is now in Feb 2021. It seems that rapidly anything scheduled for the autumn is going to be pushed back further.

We finished watching The Last Dance (really enjoyed that, even though I had no idea about basketball and had to ask Andy all sorts of basic questions like how many in a team, how many points do they get for the net etc)- I like a sport doc that is good even if you don’t know about the sports.

We then started watching the thing about Peter Falconio (the backpacker who went missing in Australia) but somehow ended up watching the episodes in this order- 2, 4, 1… no idea why as we used the Channel 4 i-player thingy so you would think it would direct us to the first one first! It jumps around a fair bit in time, so we only realised after watching 2! 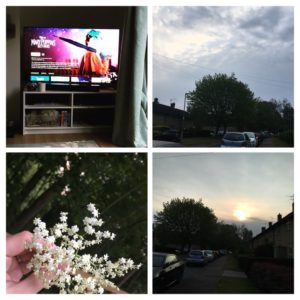 I was inspired by a friend to have a go at elder-flower cordial, so I spent some of my runs hunting for it. I found what I thought was some, and took a piece  home to check, (it was) but it wilted quickly so I realised I’d need to pick it on the same day as making it- a weekend project. I did see some lovely sunrises, and despite all the rain, most of my runs were dry (a little drizzle on Tuesday).

On Thursday Andy was watching a live podcast, so I decided to watch Mary Poppins returns- I feel as if I am snuggling up under a blanket when the  film titles start- it’s such a comforting film (and catchy songs, apart from the stupid product placement song…).

On Friday I baked some cinnamon rolls in preparation for Saturday (a socially distanced run with my dad)- I was really looking forward to it, and it properly made it feel like the weekend was here. We allowed ourselves the next Queer Eye episode too- don’t want to burn through them too quickly!

Do you have anything booked that you are hoping won’t get cancelled or postponed? Are you a banana bread fan? Any good TV recommendations?