Last week was the final week before the holidays and as with all the weeks before, it was pretty much the same, although I didn’t do yoga on Monday morning and I have no idea why (I think I had to be in work earlier for a meeting, but I can’t remember). 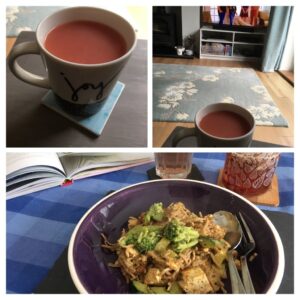 Red Velvet tea and TV one evening, and a really tasty noodle recipe from the Fearne Cotton book (a peanut butter sauce with smoked tofu, broccoli and courgettes)

Anyway, early morning runs on Tuesday, Wednesday and Thursday, and our final yoga class on Wednesday evening. Some people talked about possibly re-starting in the actual yoga venue in September, but I can’t imagine that at the moment. Also some people seem to interpret the “1 metre plus” as being 1 metre, and forgetting the plus part (which means additional measures like masks, windows open, additional cleaning etc)- I can’t imagine doing yoga in a mask, and I also don’t think it would be that responsible of me to go as once back at work in September I’ll be exposed to all of the germs that come with being in a room with 30 children all day. I am hoping the online classes continue. 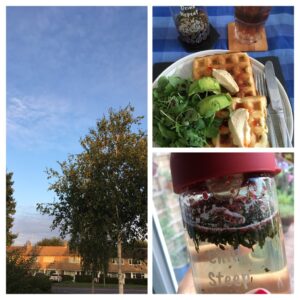 I had planned a trip to the Waffle House on Friday with some colleagues, and after chatting about it Andy decided he fancied waffles for dinner (on Thursday) so we made the hummus and avocado ones- so tasty. 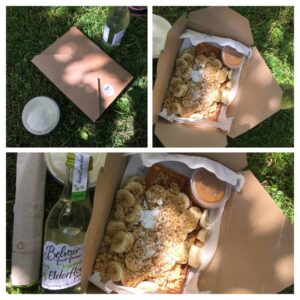 And then we reached the end of term- and it felt very strange indeed. A couple of us had arranged to head to the Waffle House for a late lunch (we finish early on the last day of term, and Friday pm’s has been our planning time so we could head off once everything was sorted)- they were doing takeaway only, with a smaller menu, and you had to order online. I was a bit apprehensive about it, having still not been anywhere like that (no takeaway, no coffee shop, certainly no supermarket or anything) since March, but it was actually quite good to see how well it worked and how everyone managed to keep at a distance when collecting. We then went and sat in the park and had a catch up. Although there was a huge group of people (at least 30 adults plus loads of kids) and that was a bit frustrating to see as the limit is still 6 people outside meeting up. 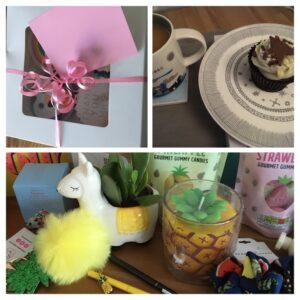 It was good to mark the end of term (and year) in some way, because so many of the other events (like sports day) have not happened so it has felt rather strange and a bit of an anticlimax. I was given some lovely gifts from colleagues and children/ parents, including these gorgeous cakes- the penguin was a particular favourite of mine of course!

In the evening I watched a live podcast of a teaching related comedy one (Two Mr P’s) and that helped make it feel a bit more like the end of term too. 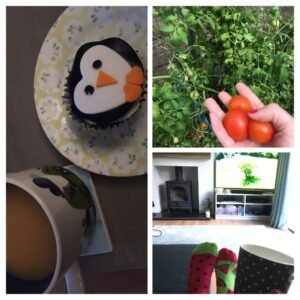 Saturday was standard with a run with my dad and brother, breakfast in their garden, and then relaxing at home. Our tomatoes have finally started turning red so it’s been good to eat them after tending them for so long. 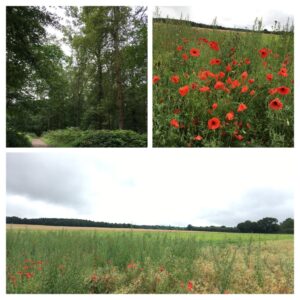 On Sunday I had a run around some of the WGC 20/20 route, and then did a bit of pottering in the garden. We had been working our way through Mrs America which I really enjoyed. I thought I would find it annoying (I gave up on Mad Men after a few episodes because the sexism was so frustrating) but I found it so interesting to see how the movement developed, although you could also see how the scaremongering worked and how that it still used today by some political parties. Worth a look on i-player anyway. 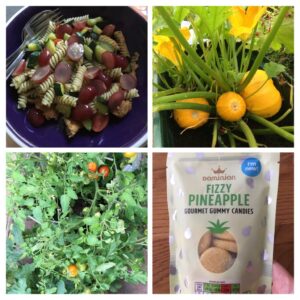 We had seen on a Queer Eye episode a recipe using pickled grapes, so we adapted it a bit (pesto pasta veggies, some quorn and then pickled grapes). To make them you basically soak them in red wine vinegar for a few hours and they are so tasty. I love pickled anything so this was a win for me.

Do you like pickled foods? Have you been out to eat yet? I definitely don’t feel like going to a restaurant any time soon, although we would not tend to do that regularly anyway. I think it was good for me, mentally, because I have built a lot of things up in my head to be bigger than they actually are.