Week beginning 12th October- I’m getting very behind with posts! 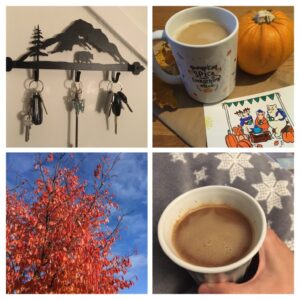 A few snapshot- our key hook that we bought in Canada a few years ago is finally up- we could not decide for ages where it should go. Plus standard autumn photos of chai, hot chocolate and gorgeous leaves. 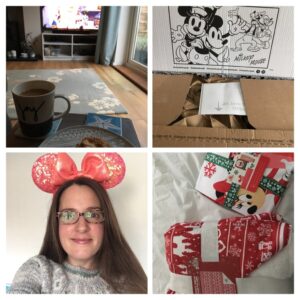 I was very excited when my Disney order arrived- I had plans to buy these Little Mermaid ears when we went in the summer (planning in case they do the Princess Run weekend again some time), and I also got some PJ’s, a Christmas blanket and a Lilo top. The Lilo top was actually a dress, and the PJ’s were too big so I had to send them back and re-order which was annoying (as you could not just exchange). Anyway, they cheered me up. 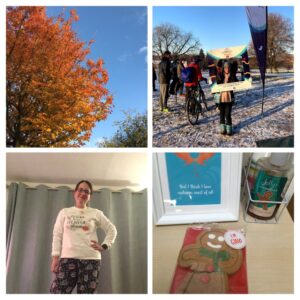 The parkrun page were sharing photos of snowy and icy runs, and it brought back memories of my parkrun in Oslo last November- that was such a fun weekend. Who knows when parkrun tourism will be back on the cards?

Once home (and if I run, once out of the shower) it is straight on with the lounge pants now, and the Christmas ones have come out, although Andy didn’t approve of me mixing them with my autumnal pumpkin top. I messaged my friend who is into fashion and she said it was fine so I am  going with it!

I “made” mince pies at the weekend- if you can say that, because I used frozen pastry and that gorgeous Meridian mince pie filling, so basically a bit of rolling and spooning and baking and they’re done. No picture though- oops. 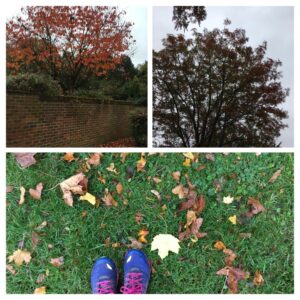 Runs have been standard- 4 miles after work on Tues and Thurs, (not)parkrun with Dad on Saturday morning (with a warm up first) and 10 miles on Sunday, plus yoga on Wednesday. This Sunday I headed to Panshanger and was very excited to see the cows close to the path. I am not normally keen on cows but these ones are super docile and so I don’t mind walking past them. 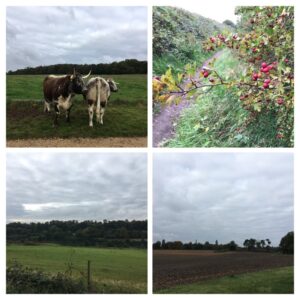 For a bit of a laugh I completed the Gov UK questionnaire about what to retrain as. Weirdly it didn’t ask anything about qualifications, mainly vague questions about whether you enjoy telling people what to do. My results were hilarious. Fairground worker was one (which includes maintenance on the rides- I can’t even fix a puncture on my bike…). Farrier was one. I am not keen on horses so I don’t think I’ll pursue that.  Beekeeper was one. I mean, I do like nature, but is there much call for beekeepers? One that looked right was in Education (am I in the right job all along??), but it turned out to be an education technician. I have to get my class to cross their fingers if we want to watch a DVD because the computer only works for me half the time.  Then I had the option of answering a bonus question, so I thought I would. It was “Can you read well?“. Well, I put yes, because I think I can read quite well. Then the careers suggested to me were Cosmetic Surgeon, Sonographer and Surgeon. I was not once asked if I like blood, or am squeamish, or faint when I have injections…. the list goes on. Safe to say I don’t think I will be retraining for any of these suggestions, but it was quite funny. I am glad that surgeons can “read well” too, although I feel like there are maybe more skills that they need???

I’d been feeling a bit fed up because work was so busy and all our weekends seemed to be merging into one (nothing significant to look forward to, and it’s not as if we would be busy every weekend but we would see a band or watch some comedy or have a day out every now and then), so I suggested to head to Hatfield House for a walk around their grounds. 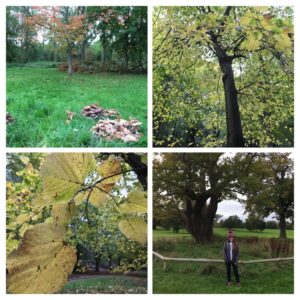 There are a few marked walks so we opted for the 3 mile one, and it was really enjoyable to be outside in the fresh air and having a change of scenery.

Have you had a go at the career questions yet? I am intrigued to know what else was suggested.